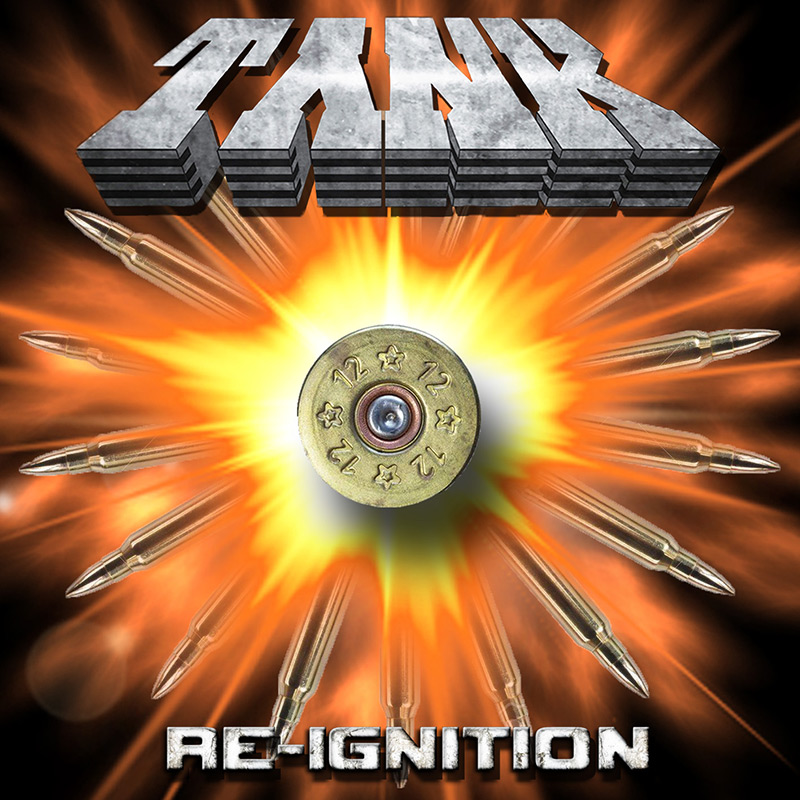 Earlier this year this web magazine reviewed the CD ‘Sturmpanzer’ by Algy Ward’s Tank and my colleague Hans van Peppen was not very impressed. This version of Tank is a different one. The two guitarists Mick Tucker and Cliff Evans have their own version of Tank. They used to work with Algy Ward in the eighties when the band recorded albums like ‘Power Of The Hunter’, ‘Filth Hounds Of Hades’ (without Tucker and Evans at the time), ‘This Means War’ and ‘Honour And Blood’ but in a later stage Ward went his way and so did Tucker and Evans who recorded several albums with a certain Doogie White on vocals. So today there are two versions. Tucker and Evans regularly got bombarded by fans asking if there were any plans of re-recording some old songs as the band still played them live. And that is what ‘Re-Ignition’ basically is. The best songs of the above mentioned albums have been selected, slightly re-arranged and recorded again with new singer David Readman (Pendulum Of Fortune/Pink Cream 69) making his recording debut with Tank. And the addition of Readman is what drew my attention as I think that at the moment he is one of the best rock vocalists out there. And what also drew my attention was the fact that shortly after the release of ‘Re-Ignition’ the band toured with Raven and Girlschool in Australia (and as per usual my hometown Perth missed out which completely pissed me of!) and shortly after that had gigs in Japan and are about to tour South America as well. A few trips to YouTube made it clear for me that ‘Re-Ignition’ could be an album that would be right up my alley. The current line-up of Tank resides for a big part in The Netherlands (Readman, Tucker and bass player Randy Van der Elsen) and is completed by Evans and the German ace drummer Bobby Schottkowski who has been with Tank for some time now and also played in Sodom. ‘Re-Ignition’ is a perfect example of how it is possible to give older songs a new lease on life. Tucker and Evans treat us to bone hard riffs, splashing solos and twin solos while Van der Elsen and Schottkowski lay down a thunderous foundation under the eleven songs. And Readman does what he does best, he sings them in such a way and with so much force, class and conviction that I probably never will play the first four Tank albums with the mediocre vocals of Algy Ward ever again. This is how you drag old school melodic heavy and speed metal into the modern age. There are two guest singers on ‘Re-Ignition’ as well. Never been a fan of Tom Angelripper of Sodom or Dani Filth of Cradle of Filth but I must say that Tom on ,,Power Of The Hunter’’ and Dani on the ultra-fast and very short track ,,Shellshock’’ come to the party as well. But it is David Readman who steals the show for me as I believe that this material is about the heaviest he has even tackled in his career. Especially ,,The War Drags Ever On’’, ,,Walking Barefoot Over Glass’’, ,,Honour And Blood’’ and the more melodic ,,W.M.L.A’’ are killer songs making the transition from the eighties to 2019 in a more than satisfactory manner. This is (and I am not making this up!) without a doubt one of the best heavy metal albums you will encounter this year! Guaranteed to shake the fillings in your teeth! After the gigs in South America Tank will be starting the preparations for a new yet untitled studio album set for release in early 2020!