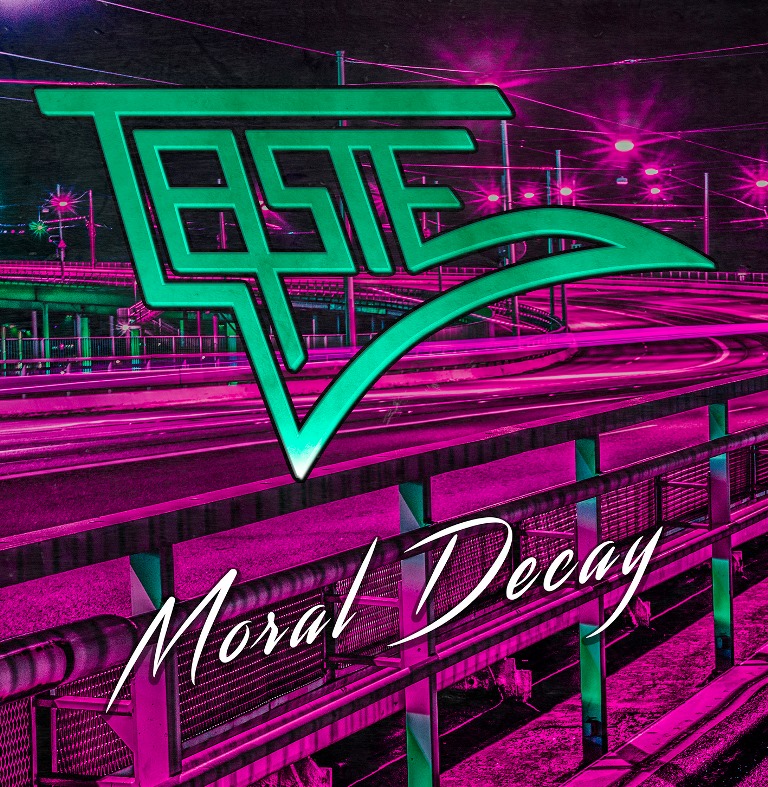 Parting ways with Art Nation, Felix and Christoffer Borg step up to the plate with Taste, their ‘band of brothers’ already signing for one amazing self-titled release in 2012. On `Moral Decay’ the Borg brothers’ combine their Art Nation past with fresh toned enthusiasm delivering some top notch tunes that stick with you upon debut spin of the disc.

Where Art Nation had me limping on love or leave, the duo steers clear from exactly the ingredients withholding me from multispins of the Art Nation albums driving to work. I skipped through the albums, and that is something prohibited with `Moral Decay’. The album grabs you on the spot and the hymnic tunes stay with you for hours to come. The disc collected ‘hot rotation’ in my car stereo right away with its energy packed AOR / Melodic Rock.

Vocalist / guitar player and producer Christoffer is leading Taste through the sonic brew of 80’s and 90’s influenced tunes with bedazzling keen eye for perfection. Brother Felix in charge of keys and guitars blends his talents and without doubt perfectly feels what matches tone wise to create these intense melodic hymns. He adds up the bits and pieces to create a sterling graded high-class melodic act. The interaction is flawless. And intense ,,On My Shoulder”, for instance, is opened as piano ballad but blooms as powerballad 1 minute in. A captivating and powerful chorus is pouring with emotion. Like a silent outburst of intensity. The album’s title track is another fine piece of art. Shifting gear and tapping the emotional vein, the diversity it sublime. Much like the debut the album twists and turns on the fine line between melodic and AOR, occasionally exploring the heavier edge of the genre (the taunting ,,My Own Worst Enemy”). It is slick without being tacky and it oozes passion. Feelgood tracks change turns with keyboard pumped slow movers and powerful tunes. Bedazzling is ,,The Fire Within”, with towering keys and guitars propelling it forward. It contrasts with the more light-footed tunes and balances out the overall feel of the album perfectly. Check out the fierce guitar solo with arpeggios in major scale thirds. Keys back the impressive outburst and take us into the adventurous ,,Adventureland”, nesting in your head instantly.  ,,We Are Back” is currently in hot rotation on the World Wide Web and gives a solid impression of the band’s capabilities. Tips for the top are the here for mentioned title track, the impressive guitar driven ,,The Fire Within” and ,,Lost In Myself”. The insane ,,Sixteen Years”, with its outpour of emotions and fine keyboard progressions and guitar solo, being my tip for the 2018 top. But all in all: never a dull moment on this remarkable record.

With everyone raving the Palace CD and Nightflight Orchestra catalogue as frontrunners for a return to form of melodic rock, I personally advise fans of the genre to give Taste a go. It consists of so much energy and love for the genre, it really breathes nostalgia on 13 tasteful tracks. Without coming across dated Chris and Felix managed to put together an exquisite piece of work.

Sideline note is the clinical Linndrum sampler on the first and last song of the album. The last; “More Than a Thousand Charades” warps us back into the Jan Hammer  (synth) days of the eighties and doesn’t add up to me. The rest of the tracks are more driven and boosted by authentic drums, adding a lot more power and solid groove to the songs. With a rock solid foundation, these songs really spark the fire.