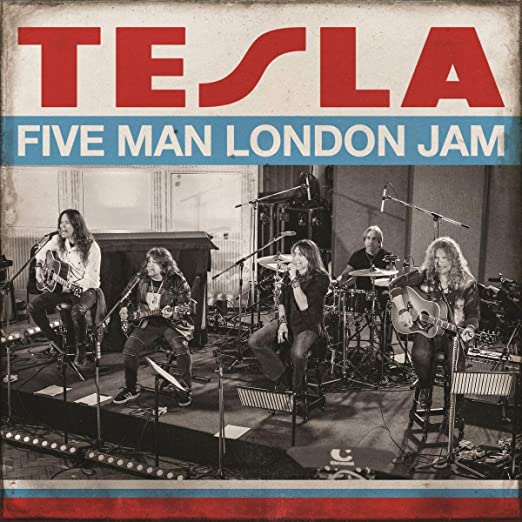 In 1990 Tesla was one of the frontrunners of rock bands releasing an acoustic album. Their ‘Five Man Acoustical Jam’ was highly praised and in a way was the cherry on their musical cake that started so euphorically with ‘The Great Radio Controversy’. I have always been a fan of these boys from Sacramento, California but last year I was very unpleasantly surprised when the group with still four founding members remaining joined hands with Def Leppard guitarist Phil Collen producing the album ‘Shock’. What a shock it was as Collen (who co-wrote all the songs) managed to make the band sound like a third rank Def Leppard copy. The album was soft, polished and had hardly any Tesla characteristics at all. I can understand that a band every now and then feels the need to do something different but Tesla sounded unrecognisable on ‘Shock’, basically shooting themselves in the foot and leaving the bulk of their fans disappointed. I recently played the album again just to check if my opinion would change for the better but no it did not and I guess it never will. Still, we all are entitled to a blooper so with fresh courage I ordered ‘Five Man London Jam’ only to find out that no less than five songs that were featured on that 1990 acoustic record are also present on this one. I find it strange that a band with such a big catalogue like Tesla basically repeats the same trick by putting ,,Cumin’ Atcha Live/Truckin’’’, ,,What You Give’’, ,,Signs’’, ,,We Can Work It Out’’ and ,,Love  Song’’ on this record that was recorded for a very select crowd in the famous Abbey Road studio in London where The Beatles wrote so much music history. So it is understandable that the Beatles cover ,,We Can Work It Out’’ is included, it must be quite exciting to play this particular song in the environment where it was created and recorded so many years ago. But there are plenty of other songs in the kitty that could have been chosen. There are also two songs of ‘Shock’ present (,,Tied To The Tracks’’ and ,,California Summer Song’’) and although in an acoustic jacket, for me they are not really representative for Tesla. But it is not that ‘Five Man London Jam’ is a fluke, therefore this band has too much class. A song like ,,Paradise’’ is still very impressive, also in an acoustic version with the guitarists Frank Hannon and Dave Rude going to town. Jeff Keith is as always himself with that raspy voice fighting his way through the record the best he can but somehow I can’t escape the feeling that the singer has his best days behind him. I suppose for a Tesla fan the band takes a bit of revenge for the ‘Shock’ blooper but if we are brutally honest this record is good but not far as good as ‘Five Man Acoustical Jam’. I am curious to see what the next move of Tesla will be, back to their rocking roots or drifting further away from that? Time will tell.