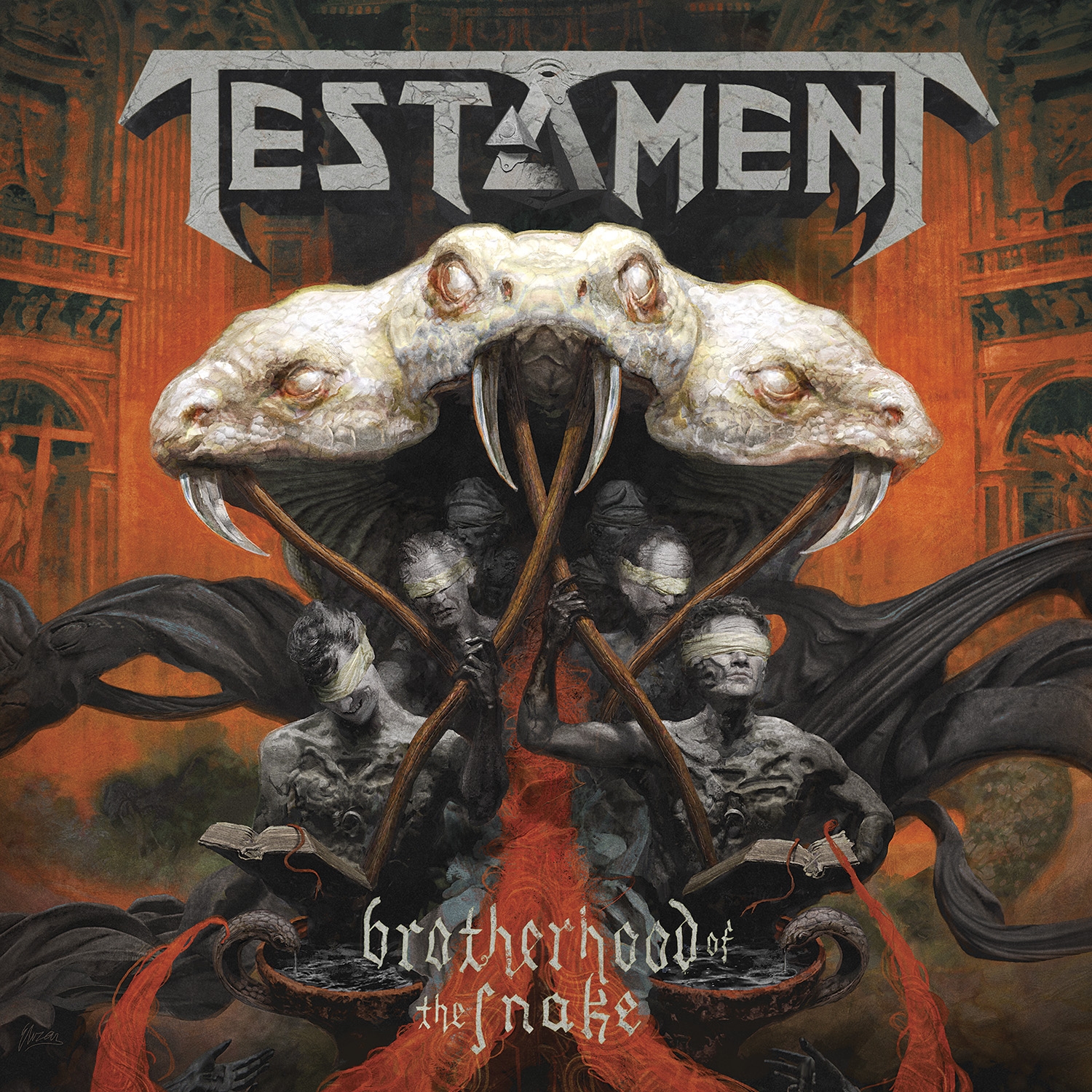 Flying the flag with pride again since their return to form on `Formation Of Damnation’, Chuck Billy’s Testament releases their 3rd album in succession as the flagship of thrash-metal. Reuniting with classic line-up members revitalized the band’s sound and took them back to the very roots of their `The Ritual’ days. Though the revolving door never really came to a halt proven on `Brotherhood Of The Snake’ once again, the band’s core line-up is consistent and productive, focusing on the band’s renowned trademark sound. The classic punch is back, the razor sharp soloing over crunchy riffing: and Chuck’s powerful loud gut felt grunts and howls. From the energy unleashed in the title track all the way to the final tones of the album, this new CD kicks serious butt. Variety once again is king without lacking the speed and power to make it all combust. Old school infested riffing on the power laden ,,Black Jack’’, almost anthemic fist pumping on ,,Born In A Rut’’ and the headbanging melodic powerhouse ,,Seven Seals’’. I see boiling mosh pits and fists flying high as I awaken in the presence from my days as a teenager at the Dynamo Club (NL). The brooding atmosphere is captured perfectly even though the production feels slightly inconsistent even though it is powerful and loud. A rush job perhaps, or a well calculated clinging of their paws in the past… Overall it is Chuck who celebrates the bands perpetual thrive and lack of hipness. Billy sinks his claws deep in today’s ill being of world politics moulded into the characteristic lyrical form of the angry frontman. Rituals and cults of our modern day society going hand in hand with the man’s agonizing outbursts of anger. The occasional drama to fire his emotions are benchmark and display Chuck’s intellect and sense of humour captured inside his emotional outages of passion and pain. The charismatic frontman even displays a more melodic (singing) side we haven’t witnessed in years when he steps away from his loud mouth howls and grunts. But the spotlight swings two ways on this energetic tempo monster. Master Skolnick’s riffing is top notch and adds the fuel to make this fire burn sky high. The untamable tempo of ,,The Pale King’’, ,,Neptune’s Spear’’ and ,,Stronghold’’ make him put a mark on the band’s characteristic style and thrive. It is all trademarks and it is exactly what pleases fans of the band. It is the classic potion of a band perhaps the most beloved act in heavy metal to date. `Brotherhood Of The Snake’ is all of the above.