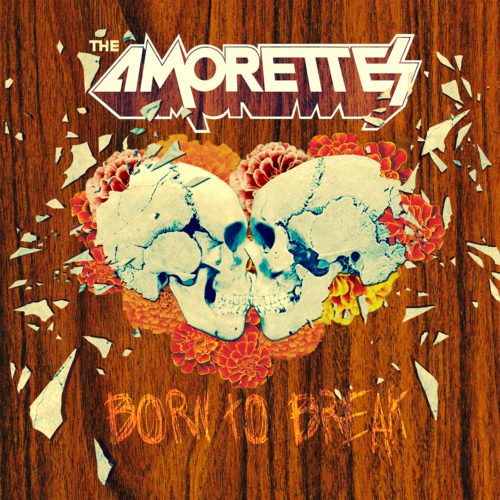 This all female rock trio comes from Scotland and has earned a reputation as a hard playing formation, not shy of hard work and paying their dues. ‘Born To Break’ is the fourth CD of The Amorettes and when a guy like Thunder guitarist Luke Morley once again produces your album it should be clear to everyone that these girls really can play, as Morley does not waste his time. ‘Born To Break’ features a dozen rock and roll songs, being dominated by the relentless guitar work of Gill Montgomery and the energetic drum and bass contributions by Hannah and Heather McKay. The group has been named something like a female version of Motörhead but the music is a bit different while Gill has a clear and somewhat monotonous voice. Still, she can bring it across but it is especially her exciting riffs and solos that make The Amorettes stand out in comparison with other all girl rock bands like Girlschool and Rock Goddess. This group is more on the vein of Thundermother from Sweden bringing us a fair and no nonsense portion of good old classic rock with bite and guts. I would not be surprised if Morley has contributed some of the song material as has Black Star Riders vocalist Ricky Warwick as The Amorettes sound mature and have ditto songs like ,,Bat Shit Crazy’’ (real kick ass song), ,,Everything I Learned (I Learned From Rock And Roll)’’, ,,High On Your Energy’’ or ,,I Want It Bad’’ to back up their convincing performance. If Gill can apply some more variation in her vocal approach in the future (maybe Thunder vocalist Danny Bowes can supply some tips?) I am pretty sure that these girls can go a long way indeed.