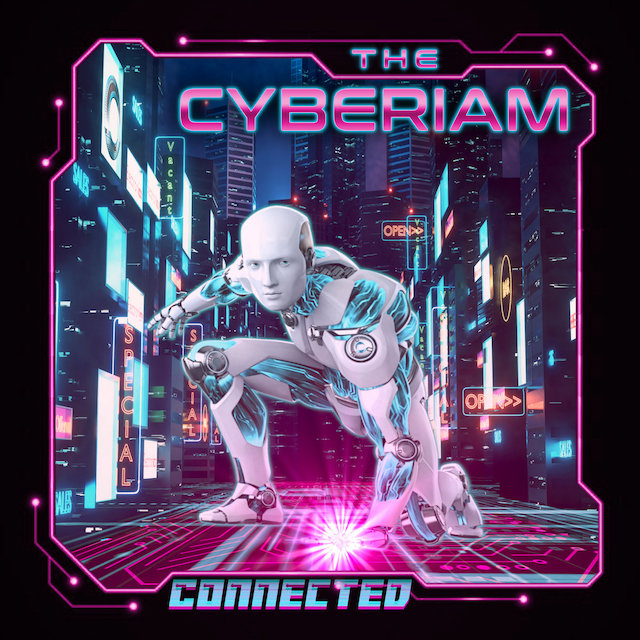 72 minutes of sheer melodic emo prog is what is offered on the new The Cyberiam album `Connected’ exposing their enormous potential as musicians and songwriting. Raising the bar, The Chicago based prog rockers make their progressive long spun songs intensify with every spin gaining momentum. `Connected’ is an album that will please fans of the classic prog rock genre and will most certainly appeal to fans loving melodic rock and genre specific ‘monsters’ like Tool and Opeth.

Frank Lucas’ keyboards add the right pompous push and swirls to make it totally unique. The harsh break echoes as acoustic guitar and vocals take over shortly. To delve further into the prog indulged sonic exercise. Over all this majestic progressive power it is former UK popstars winner Keith Semple whose appealing vocals draw most attention. Hitting the right notes with graceful vocal execution he keenly doses melancholy and poise. Injecting the songs with warmth and emotion.

,,The Moral Landscape” rocks sturdier with appealing riff and drum break before the scattering bass tilts it as Semple adds his vocal line. Heavy potent rocking it pulls forward in best 90s Rush fashion with Semple tapping into the Geddy Lee-vein during the appealing chorus. It whelms the feeling without ever copying. The song evolves with delicate musical interaction returning to form. Ominous kays evoke a darker edge before reaching for the glorious melodies again. Awe moments are casted by the dozens, especially when the band moves onto melancholic terrain in ,,Wakeup Call” with Keith displaying his jaw dropping appeal and pop-toned voice. The song packs a monumental melody yet embodies frailty and benevolence.

,,Sunset On Mas” is opened with radio traffic from Space Shuttle Columbia to control center Houston adding to the turbulent atmosphere. Semple and Kovacs exchanging vocal duties making the song radiant. Again, the musical framework of the song is muscular and insanely intense. Sound effects implemented add to the epic appeal with Semple’s guitar solo and jazzy drum-bass interaction casting discomfort midway. “Here we are… for rocks from the Sun” Keith belts out with emotion calling out the future and emotionally going in all in for the grand finale. ,,In SaN1tY” opens with a blaze of prog rock and sheds skin in jazz rock fashion.

A FEELING FOR DRAMA

Hypnotic intrinsic bass and echoing vocals pave the path for a 70s vibe that eludes with a loud Hammond organ and powerful incisive pushing guitars. More viable and progressive than any of the previous tunes it spits flames. Over its mega-melodic chorus piercing guitars hoover, whilst keys swirl and pump the overall sound that is layered with monumental bass playing and polyrhythmic drum patterns scattering off the walls. Headphones are mandatory as musical execution hits like a tidal wave.

Returning to their finer melancholic form The Cyberiam open ,,Be Connected” with wonderful piano and vocal interaction, outlining Semple and Lucas’ impeccable feeling for drama. ,,Be Connected” is a slow mover with chartbusting accolades and oozes comfort. Running 8:44 the song however flourishes like a 4-minute pop song. It lures in the listener with insane melodies and colourful playing. Close harmony vocals welling with emotion and are on par with rock’s finest such as Little River Band and Eagles. ,,Be Connected” keeps you connected to its dying seconds.

The Oscar Wilde tribute ,,Wilde Things” puts down the progressive pedal again, tapping from the Rush’ ,,YYZ” scales during the opening, frequently returning in the musical theme. Morphing melodic again the song is prompted by more Cyberiamic interaction. Technical it with frustrate fellow-musicians while it also listens like a freaking freight train running lose. Just check out the sudden double bass and metal riffs exclamating the songs combustion. Loud 70s towering symphonic keyboards are keenly interlaced with more high-tech elements, and the song’s compulsion is drastic and dramatic following the repetitive statement “…the Oscar goes to…”.

Propelled by an intrinsic bass line 10-minute ,,Miles Away” is another song with subtle musicianship painting a sonic landscape worth exploring by headphones. Vocal effects and stop ‘n go motion in between slick melodic choruses bridging to emotional intense melodic sections. Cinematic appeal oozed the songs shifts shape in short subtle sections adding to the experience. You are literally in the hotseat!

`Connected’ is closed by another grandiose composition. ,,Bigger Questions” is brought to life with repetitive enticing guitar-licks and plucked bass. Evolving with melodic keys injecting an ebbing and welling of emotions the track advances with captivating melodies and elluring chorus. It features a Dream Theater reminiscent metallic body of riffs and drum interaction without losing the typical Cyberythics. Semple belts an impressive job once more displaying his range and fine toned feeling for drama.

`Connected’ is the 2nd album by The Cyberiam and it displays the evolution of the band. Their debut may be one of the most promising albums in prog rock to date. `Connected’ lives up to the high expectations of spectators all over the globe. The band has the ability to create songs with a lot of appeal that keep growing on you. There’s an unmeasurable degree of insanity captured in the virtuosity of the musical sections while the comfort wells in waves. Melancholy and soaring drama is unleashed in colourful musical excavations mining for gold. It all adds up to this essential record.