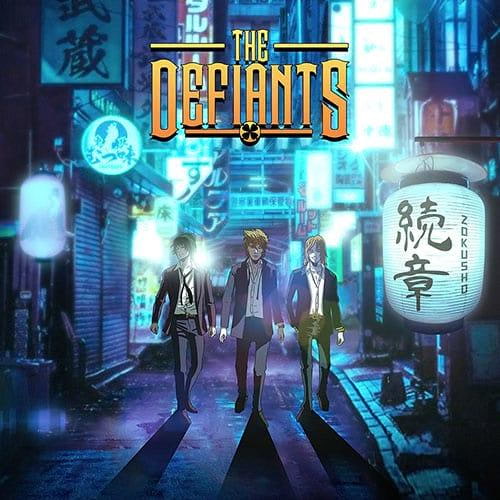 The Defiants is put together by genre greats Bruno Ravel, Rob Marcello and Paul Laine, the backbone of 90’s hard rock powerhouse Danger Danger. `Zokusho’, which is Japanese for ‘the sequel’, is the follow up to their acclaimed 2015 debut and takes their evolution one step further.

The album packs the typical D2 ingredients and fuses it with a more modern overall sound. The album more than once reminds me of the last 2 Europe releases without coming off as a rip off at all. Therefor The Defiants pack to much specific sound from their own past. It is especially the vocal lines that frequently sound reminiscent to that of the Swedish rockers, but that is basically where it ends. Marcello’s solos are impressive and his fret board magic adds the panache the slick melodies need. And melodic is what makes this album tick so perfectly. The seasoned trio (plus drummer Steve West) crafted impressive tracks. Very compelling and driven they rock forward, injecting just the right dose of modern elements and effects. ,,Love Is The Killer” is memorable, but ,,Standing On The Edge” is more outgoing and nesting with Laine’s vocals sticky and powerful, displaying a rough Gioelli-edge during the short slow section and pitching high when they spread turmoil. When The Defiants go all predictable (,,Hollywood In Headlights”), the band manages to infringe the slick and sticky summertime tune with just enough depth to make it stand out. Drums are ponderous pulling forward underneath the ‘ooohs’ and ‘aaahs’, and guitars lay down intrinsic riffs and solo. It’s the same blueprint used for ,,Fallin’ For You”
,,Hold on Tonight” is slower paced but has an urge spread underneath the slick melodies. The song blooms with impressive melodic chorus and nests on the spot. Echoing keys and choirs are also making it standout. This trio of songs is deeper rooted in the band’s past and straying from this present definitely offers the better moments. Rough and rocking with attitude like on the party cracker ,,Allnighter” the band touches a sleazier side before shooting into that particular party mode. Arpeggios fly over the place and Laine roars wildly. It gets even better with ,,It Goes Fast”, which retains the urge and power and is taking into the now with sound effects before it dives into the classic rock era during the chorus. The gritty guitars have supplemental layers full of chorus thickening the hammering rocker. More melodic recognisable is the slick ,,Stay” which could have been on the D2 debut. ,,Alive” is somewhat out of the ordinary fusing a U2 80s guitar sound with pompous rock elements to explode on the choruses. The interaction of styles works perfectly.
Exquisite is the opening to ,,U X’d My Heart” that shoots into gear with wonderful a riff, effective and powerful. The song is one of the best I heard from the band, and better than any of their D2 tracks. It is deeply rooted in the arena rock era, but breaks free with impressive drive. Swirling solos fly back and forth and the chorus is high calibre sing along studded. The honky-tonk toned bluesy rocker ,,Drink Up!” closes the album! It breathes a roadhouse atmosphere and chants “Bottom’s up” making it go over the top on all accounts without losing the bluesy bandana. In the solo the track goes wild and during the recurring chanting chorus it even touches Def Leppard like bombast.

Another thing that is especially pleasant to conclude is that this album is not the typical Frontiers record seeing singers and songwriters cooperate on a project, which more than once sounds predictable. The Defiants defy hard rock and melodic rock in a more natural way climbing the pedestal to oversee the sonic wasteland behind them. The album has a high fun factor but also brings an urge and drive to the plate that is mandatory to make it stand out. Musical craftsmanship does the rest.