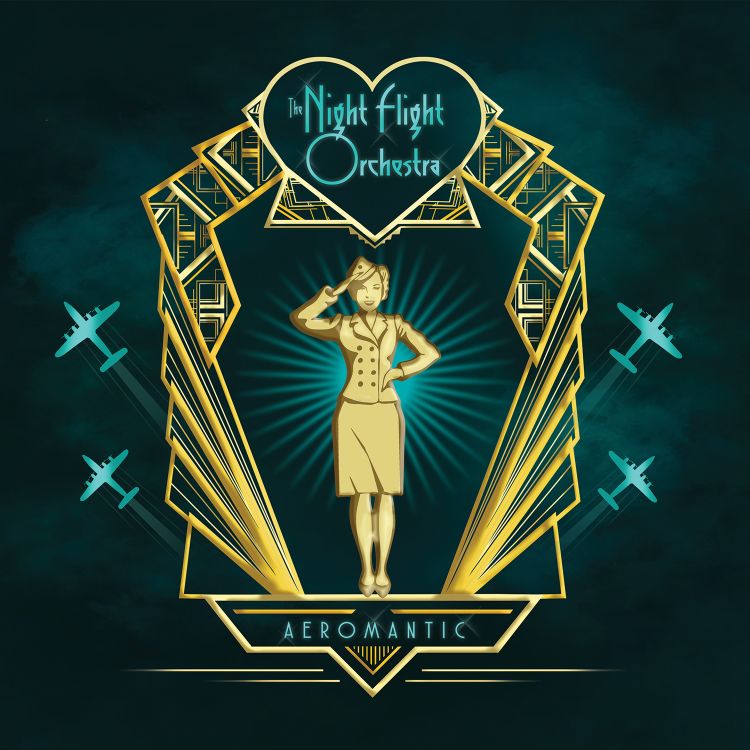 The Swedish formation The Night Flight Orchestra have done things differently in comparison with a lot of other rock bands. In fact they are hardly comparable with any group active in the rock genre as these dudes plus two ladies might have a heavy metal back ground with bands like Soilwork, King Diamond, Spiritual Beggars and Arch Enemy, their records were always a light hearted mix of rock, pop, progressive rock and AOR. Accessible, melodic and in a way fresh and different, No wonder the last two albums ‘Amber Galactic’ and ‘Sometimes The World Ain’t Enough’ were successful for singer Bjorn Strid and his fellow musicians. With their fifth album ‘Aeromantic’ the group has not changed the formula too dramatically. As a unit the band performs more than ever as a tight band and it is a big plus that the album and the songs nicely flow along starting off with the pacey ,,Servents Of The Air’’, a song that fits this band like a glove. It is jumpy, up-tempo, spacey and easy on the ear. As the aviation industry is more or less grounded by this Coronavirus maybe the timing of this record could not be any worse but hey, when the band started recording this one shortly after finishing ‘Sometimes The World Ain’t Enough’ nobody had heard of this virus. Listening to the album it also becomes clear that The Night Flight Orchestra has at times come to a halt when we are talking about songs that really differ from the rest. I mean a top notch composition like ,,Turn To Miami’’ (can be found on ‘Sometimes The World Ain’t Enough’) is not to be found on ‘Aeromantic’. There are even a few doubtful moments there (,,Golden Swansdown’’ is very tame but has a remarkable guitar solo) but not to the extent that the fifth album of The Night Flight Orchestra will frustrate or disappoint fans as Bjorn Strid and company still sound different and unique. I mean the combination of different musical styles being blended together to a recognisable band sound is nothing to look down at so with ‘Aeromantic’ I do think that The Night Flight Orchestra will consolidate their position but the real surprise is a bit over.