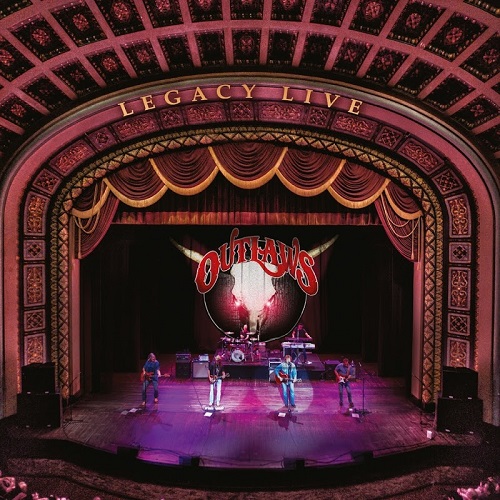 The Outlaws are still a respected name in the southern rock movement that is still alive and kicking in North America. Originally from Tampa, Florida the band had a hard time getting signed. When the late great Ronnie Van Zant put in a few good words for them record company Arista signed them and with success. The first three albums ‘The Outlaws’ , ‘Lady In Waiting’ and ‘Hurry Sundown’ were instant hits and put the group firmly on the map. The Outlaws found a way to sound a bit different by combining southern rock with country and adding big and thick layers of harmony vocals to their sound. And being a southern rock band there was also a three piece aggressive guitar army. The main guys in those days were guitarist/singer Hughie Thomasson, guitarist Billy Jones, drummer Monte Yoho, guitarist/singer Henry Paul and also guitarist Freddie Salem was for a while part of the line-up. Which fan of this genre is not familiar with songs like ,,Hurry Sundown’’, ,,There Goes Another Love Song’’, ,,(Ghost) Riders In The Sky’’ or ,,Green Grass And High Tides Forever’’? Absolute classics indeed. There have been periods that the group was inactive and there were numerous changes in line-up. Some members have joined the choir in heaven. Thomasson died in 2007 of a heart attack (after being for close to ten years a member of Lynyrd Skynyrd as well), Billy Jones committed suicide in 1995. Some members have been in and out of the band like Henry Paul who had good spells with the Henry Paul Band and Blackhawk. In 2012 the band released a new studio-CD called ‘It’s About Pride’ and in a reshuffled line up (most guys have played off and on with each other for years in this group, Blackhawk and Henry Paul Band) took the stage again. Now there is a 2-CD live record released with all the great tracks from the old days, with songs from the Henry Paul Band (a blistering version of ,,Grey Ghost’’ with that typical southern rock guitar masturbation duel between the guitarists) and the title track of ,,It’s About Pride’’ being added for good measure. All the ingredients are still there like the gritty vocals and astonishing close harmony choirs, the country influences (,,Southern California’’ and ,,Girl From Ohio’’), the great guitars and songs that have stood the test of time. It is music for the happy few, I realise that, but I am sure there will be enough fans of this music like yours truly that are thrilled with this release. Nostalgic? Yep. Old fashioned? Tick. Honest and from the heart? You bet!!