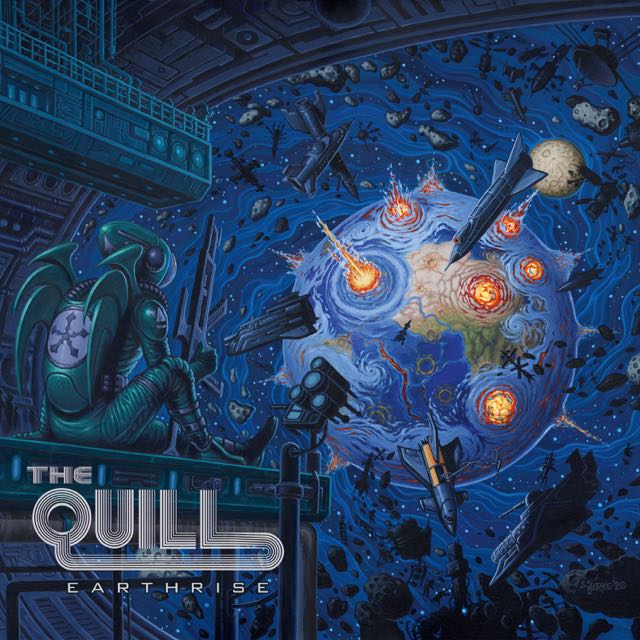 Hey, hey The Quill is back with their tenth album. Starting out more than 25 years ago guitarist Christian Carlsson, drummer George ‘Jolle’ Atlagic, singer Magnus Ekwall and bass player Roger Nilsson (who joined later) these rockers never ever disappointed me. While they had a keyboardist in their early years that made them sound like a rejuvenated version of Deep Purple meets Zep and Black Sabbath, later on the music slightly changed to a more robust combination of stoner rock, a touch of doom, a sniff of psychedelic rock and pure heavy metal resulting in some really cool albums during the years, ‘Born From Fire’ being their latest in 2017. ‘Earthrise’ is also a very cool album where the good elements of the above mentioned bands and musical genres have been further exploited but with more grit and heaviness it seems. During the years the members have also spread their wings in some other directions. Ekwall participated on the Ayreon release ‘The Human Condition’, Nilsson toured with Spiritual Beggars and some other groups, Atlagic joined Hanoi Rocks and Electric Boys [new album ‘Ups!de Down’ to be released in April] while Carlsson released a fine blues rock album [‘White Jazz, Black Magic’] with his side-project Circus Prutz. But when they join forces in The Quill things become more intense, more emphatic and at stages pretty epic as well. This is just a fine band that combines several genres into their sound and they do it in and with style. Carlsson has this uncanny feel for slightly ‘distorted’ riffs (listen to ,,Left Brain Blues’’) that would even cause a stiffy for Tony Iommi! The Quill also uses a bit of orchestration if that is beneficial to their sound (,,Evil Omen’’). ,,Dwarf Planet’’ is a mid-tempo stomper that has the power of a hurricane while the title song could have been on a Black Sabbath type record when Tony Martin was singing in that band. And still The Quill manages to sound like…. The Quill. For this record Magnus Ekwall dug deep for a lyrical content and he came up with lyrics that deal with alienation. Alienation is something that can have different directions and meanings whether it is used in a political, human or a more individual manner, take your pick. This is not a band that chooses for sugar coated lyrics or music. ‘Earthrise’ is yet again a fierce and undisputed heavy rock and metal statement by one of Sweden’s most underrated formations.