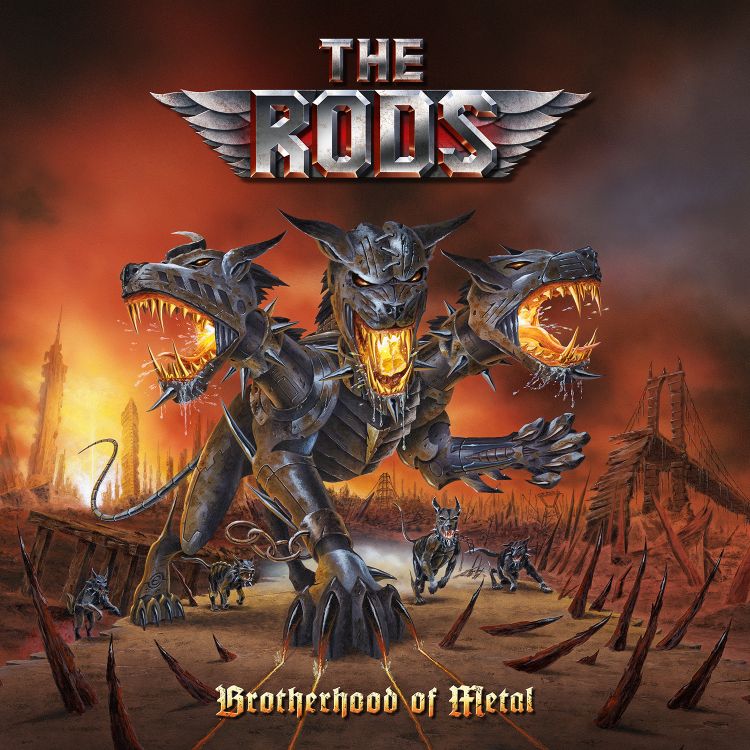 I have always loved The Rods. With their up-tempo heavy metal style they took no prisoners in the eighties when they gained popularity with albums like ‘Wild Dogs’, ‘The Rods’ and ‘Let Them Eat Metal’. And although their other albums like ‘Hollywood’ and ‘Heavier Than Thou’ (with singer Shmoulik Avigal, -ex Picture, ex-Horizon) were good examples of metal as well, declining sales led the main members Carl Canedy (drums), David ‘Rock’ Feinstein guitar/vocals) and Gary Bordonaro (bass) to the decision to call it a day. Canedy started a career as producer while Feinstein (who owns a restaurant as well) every now and then came back to the front with an album. Especially his 2004 release ‘Third Wish’ with ex-Artension vocalist John West at his side was immaculate, one of the best metal albums of that year. Later Feinstein also released ‘Bitten By The Beast’ (2010) with his cousin the late great Ronnie James Dio singing a song (Dio and Feinstein played together in the band Elf. The band later became part of the first line-up of Ritchie Blackmore’s Rainbow with the exception of Feinstein). By the time Feinstein released ‘Bitten By The Beast’ The Rods already had done a reunion gig and in 2011 The Rods made an official comeback with the album ‘Vengeance’ (again Dio contributed vocals that were recorded before he passed away) and about eight years later the three veterans yet again prove that there is still rock and metal in their reservoir. The style of The Rods has always been simple, hard and tough with hardly any room for ballads. And that is also what ‘Brotherhood Of Metal’ has in store. With a great cover concept created by Eric Philippe (it brings back memories when you look at the cover of the ‘Wild Dogs’-album) backing the record up it becomes from basically the first song ,,Brotherhood Of Metal’ crystal clear that Canedy, Bordonaro and Feinstein are making a nostalgic trip down memory lane. The record is a tribute to their own past and the evolution of metal in those days. It is about brotherhood, having a bond with other bands, about having long hair, wearing studs, leather jackets and jeans. ,,Brotherhood Of Metal’’ is more a hymn that will go down well live while ,,1982’’ is a pure tribute to the days that metal was on the rise and in your face. So, here you have it, The Rods are in full swing on this record. Okay, it sounds very cliché at times and Feinstein will never be the world’s greatest singer but this is who they are and what they stand for. Uncomplicated, rough and tumble honest heavy metal is king on songs like ,,Louder Than Loud’’, ,,Smoke On The Horizon’’, ,,Evil In Me’’, ,,Tyrant King’’ and ,,Party All Night’’. If you want to make a trip down memory lane, a journey towards the good old days when life was a lot less complicated than it is now ‘Brotherhood Of Metal’ is the record to do it with. Bang that head and let yourself go wild once again, play some air guitar and rock hard with The Rods! The vinyl version of this record has a bonus track in the form of a re-recorded version of the classic ,,Crank It Up’’.