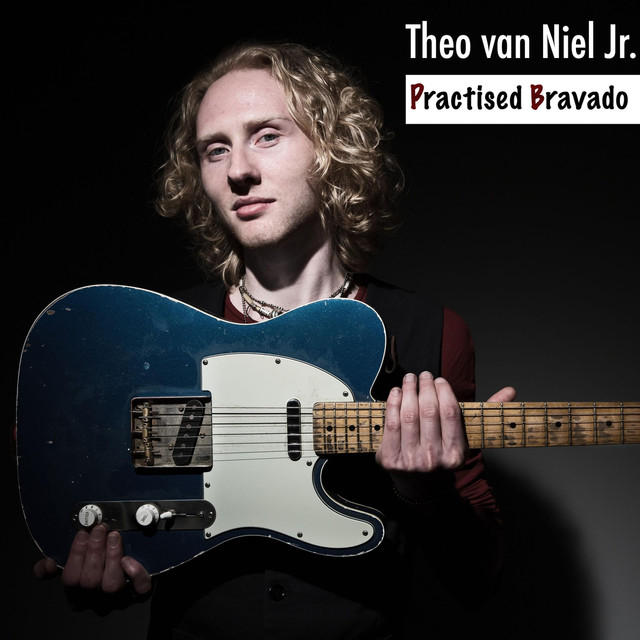 Theo van Niel Jr. is a Dutch guitarist that has just released his first solo-EP. Normally he plays in the formation Mojo Man and he has also been active with Blueshunters. Before we talk about ‘Practised Bravado’ there is a little story to tell. Theo’s dad is of course Theo van Niel Sr. Senior ran a record store called Rocky Road in the centre of The Hague for many years. I used to be one of his customers. As I worked for Aardschok magazine in those days I was (and still am) always looking for latest import releases from the USA, Japan, Canada and the UK. Theo Sr. would send me the latest records that were just in via import for me to write about and the deal was that if I did not like the CD I could send it back. In all those years I do not recall ever sending one CD back. I bought everything he came up with like the first album of a band called Giant (‘Last Of The Runaways’). And there were many more. So I can only imagine that the musical genes from Senior must have been pumped into Junior from a very young age! On this 6-track EP Theo van Niel Jr. has done almost everything himself: production, composing, art work and all the instruments except the drums for which he hired Paul Gilbert drummer Thomas Lang (on three songs), Davy Andy Henket and Dennis Leeflang. There was a time that instrumental albums were very popular. Think about the time that virtuoso players like Tony MacAlpine, Jason Becker, Joe Satriani and a bunch of guitar slingers linked to Mike Varney released some. But that period seems to be long gone. Theo van Niel Jr. proves to be a virtuoso as well. He has written six songs where he showcases his talent as a composer. His songs are not about him proving his ability on the guitar, the tracks do have a head and a tail and are based around a theme. Style wise Van Niel Jr. fluctuates between different styles like rock, funk, and even a country influenced tune like ,,Run Along’’ is there for the taking.  He sure does like to mix things up, giving the listener a rich view into his possibilities and thus keeping his songs interesting and accessible as well. This lad should have a bright future in front of him!