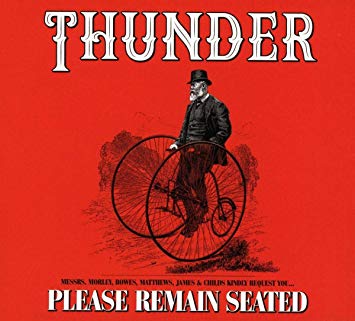 The men of Thunder have been digging into their own musical past and decided to rework several songs they recorded through the years. The result is quite stunning. ‘Please Remain Seated’ features 12 remakes that showcase the enormous musical talent this band has. It takes courage and balls to recreate your own songs giving them a complete different flavour while flirting with some different musical styles (even some tiny jazzy and country moments can be heard). The songs have been stripped down to their bare essence, rearranged, re-recorded and given a new lease on life. The way they have done it is in some cases just breathtaking, daring and adventurous, you got to hear it to believe it. Especially ,,She’s So Fine’’, ,,Low Life In High Places’’, ,,Just Another Suicide’’ and ,,I’m Dreaming Again’’ are grand songs in their new laid back ‘jacket’. Although the heaviness is basically gone on this album, this is a record that just manages to capture you while you remain seated and tap your foot. Thunder has made sure that the music still sounds spontaneous and ‘alive’. Singer Daniel Bowes leads the way with his sparkling voice, there are some background singers added, making ‘Please Remain Seated’ a complete joy to hear. I had to wait a while for my copy to arrive but I am glad I bought the limited edition as the added CD has seven songs extra including subtle versions of ,,Like A Satellite’’, ,,River Of Pain’’, ,,Higher Ground’’, ,,Stand Up’’, ,,Robert Johnson’s Tombstone’’, ,,Everybody Wants Her’’ and ,,Long Way From Home’’. I think a real fan of Thunder will lap this up, as the group has musically challenged themselves in a way like they never have done before. It is like listening to a more or less live recorded semi-acoustic album being performed in your living room while you remain seated in your chair, flabbergasted and still tapping that foot! Make sure you get your hands on the 2-CD version as you don’t want to miss a single moment!