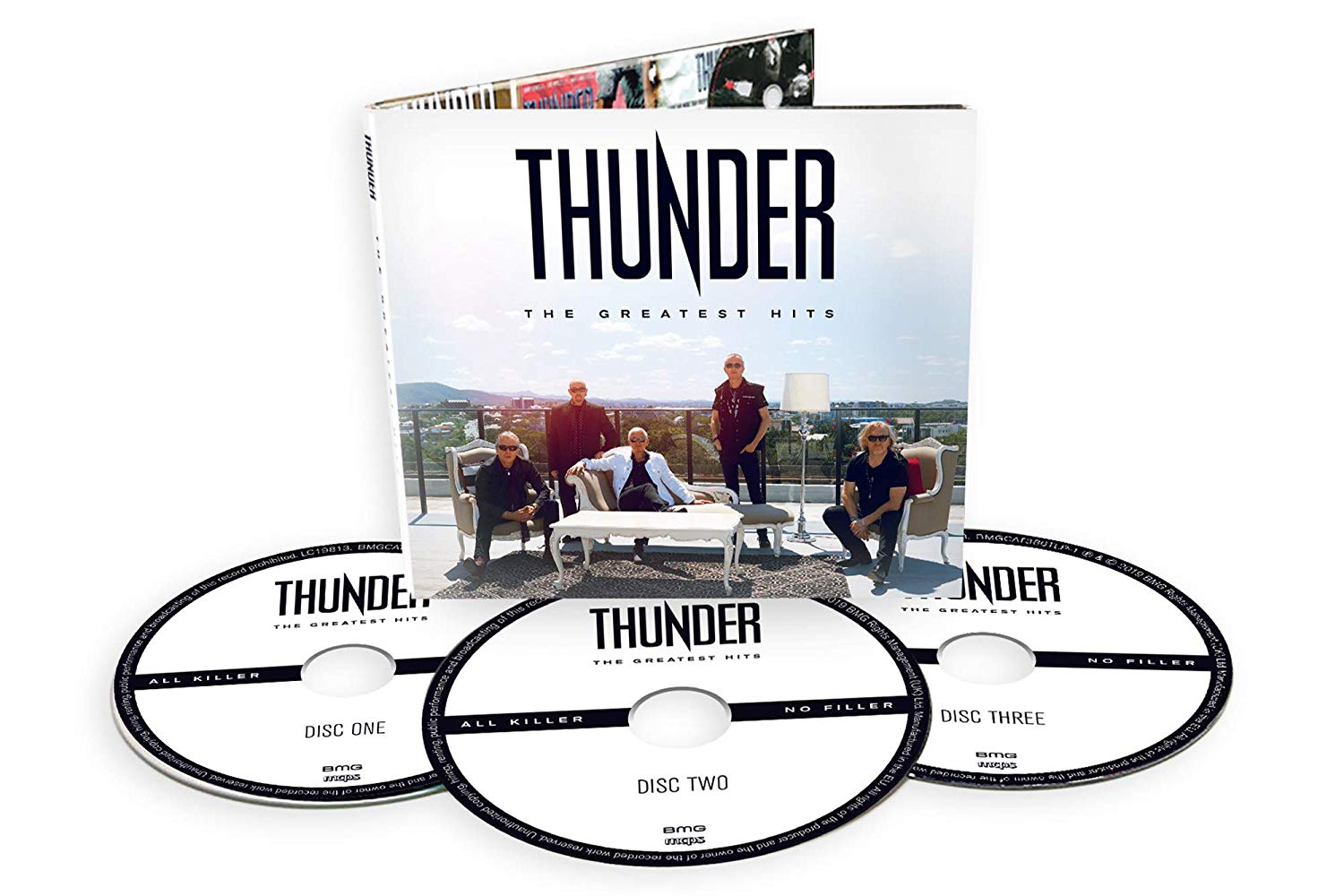 Earlier in 2019 Thunder signed a record deal with major label BMG and the first result is a 3-CD/DVD ‘The Greatest Hits’ compilation looking back at their career that started around thirty years ago. Before Thunder several members were active in the formation Terraplane (singer Danny Bowes, drummer Harry James and guitarist Luke Morley) but when that band fell apart the main guys formed Thunder and I remember the first album ‘Backstreet Symphony’ blowing me away completely (produced by Duran Duran’s Andy Taylor). When their second album ‘Laughing On Judgement Day’ came out in 1992 I saw them live at the Hammersmith Odeon in London (with Australian band The Screaming Jets as support). Tucked away in a corner I saw a man staring with his mouth wide open full of admiration for the show the band gave. That man was Jimmy Page of Led Zeppelin! Thunder became the best thing that the UK produced in the nineties and managed to impress with a lot of their other albums and energetic shows. I don’t know how many times I have seen them on stage but each and every time it was mind blowing and party time galore. I can’t imagine that any melodic rocker has not heard of this band or has not got any of their material in his or hers possession. But if you should not have anything this release is not a bad way to repair the damage you have done to yourself by ignoring England’s finest rockers. Through the years the band recorded eleven studio albums, ‘Rip It Up’ being the last one in 2017. Of course there were some live-albums and DVD’s and the fantastic record ‘Please Remain Seated’ where the band re-recorded a bunch of their songs in different and slightly more ‘alternative’ versions, so the catalogue is quite large even though the band had a break between the record ‘Bang!’ (2008) and their comeback album ‘Wonder Days’ (2015). The first two CD’s contain songs of all their studio efforts plus a few covers that the band recorded (The Rolling Stones classic ,,Gimme Shelter’’) and Led Zeppelin’s  ,,Your Time Is Gonna Come’’  and a 2019 version of their own composition ,,Low Life In High Places’’  presented in a more laid back and jazzy form. As for the rest all the songs that have made this band so loved and respected are there, including the protest song ,,On The Radio’’ from ‘Bang!’ where composer Luke Morley gets rid of his frustration with mainstream English radio who managed to ignore the band album after album and year after year. The third disc is a DVD with live footage from a show from January 18, 2019 with six songs. Once again on this disc you can see the wonderful interaction between band and audience, the beautiful feedback and the fact that if you go as a spectator to see the band you will get involved and work just as hard as the five guys on stage (whether you like it or not). The whole package looks great as well, with a gallery of old and new pictures, a crispy biography and Luke Morley commenting on all individual songs featured on ‘The Greatest Hits’. And as I write this the band is preparing for some UK dates around Christmas and have a new album in the works as well, promising things will only get louder and better in 2020. And I believe that whole heartedly!