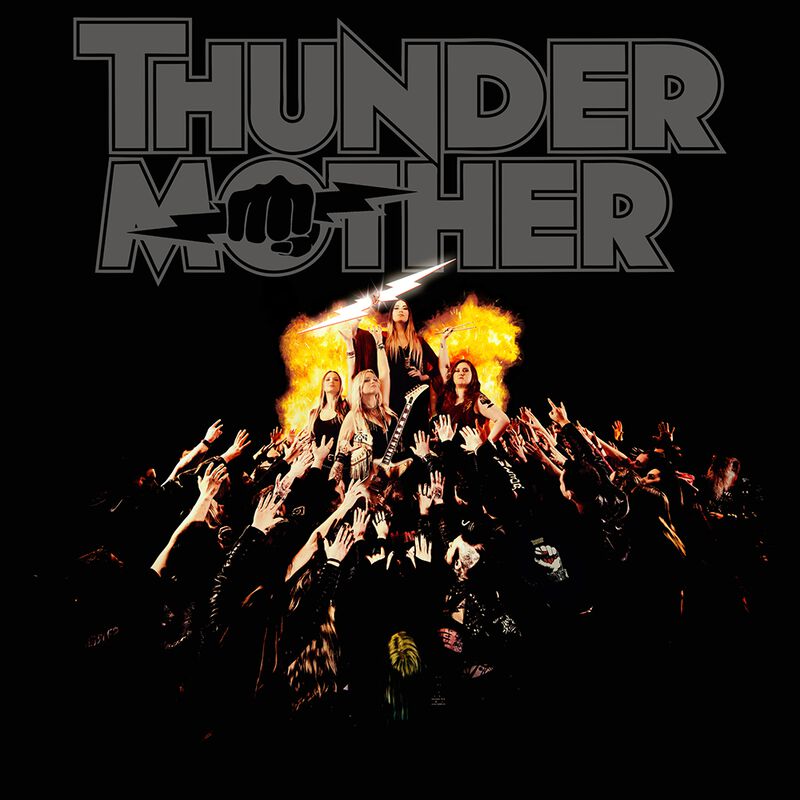 “…and our goal is nothing less than Rock ‘n Roll world domination”
Above statement sums up the self-confidence of Sweden’s finest full throttle rockers Thundermother. The enthusiast female metal band shook off all prejudice with their previous releases and now reports back with `Heat Wave’ supposedly being their best and most ballsy record to date. At our office we spun the disc and at the Friday shift the fridge was opened for some 1.5 meter social distance partying…..

Since their debuting days in 2010 Thundermother took a firm grip on the rock community. The all-female Swedes rock band smothered those judging them on their looks and keelhauled them with a wild potion of rock ‘n roll metal. Much like the mighty Motörhead and AC/DC the band injected a razor-sharp edge in their throbbing buzzing potion of metal and rock. The outcome landed deep in the hearts of genre lovers instantly. `Heat Wave’ picks up where the quartet left off on their 2019 self-titled 3rd album. With the now consistent line up the band managed to grip an upward spiral of quality outbraving its predecessors. The spunk nod drive amid the grit and gravel kicks higher and the distortion is well balanced as immediately displayed on the opening fist pumper ,,Loud And Alive” with its nesting repetitive ,,Follow Me…” The enthusiasm radiates off the edges and the ponderous beats and fierce guitars are taking the song forward with exquisite thrive. More bluesy are tunes like ,,Dog From Hell” and the ominous title track which is propelled by a signature Angus-riff. The hooks are impressive, Mancini’s vocals moan towards a larger than live choruses in the best AC/DC tradition. With Danish hit maker Søren Anderson overseeing the creative process, Thundermother’s `Heat Wave’ also sees more subtle melodic elements interlaced in their loud rocking tunes. ,,Back In ‘76” even displays true arena rock potential without losing the elemental spunk. Thundermother delivers best when the pace gets up and founding member and guitarist extraordinaire Filippa Nässil runs point like on the mosh pit anthem ,,Into The Mud”. Majsan Lindberg’s bass dominates the mid-section before Nässil fires on all engines. Kicking up the Aussie/DC beat Thundermother spits fire on the melodic anthems ,,Free Ourselves” and ,,Ghosts” before once again going all in on the bar ’n grill rocker ,,Somebody Love Me” and the riff driven ,,Bad Habits”.
With ,,Sleep” the new album even features an impressive rock ballad that would have fitted any 80s album. An outpour of emotion with towering power unloading in the chorus and the fine guitar solo. Subtle keys boast the track sky high and the tune definitely displays true hit potential. Another refreshing track is the melodic psych rocker ,,Purple Sky” with Mancini at times reviving a Joplin-ish tone. Hammond pumped with loud kicking Emlee-drums and whammy guitars the track swirls organically forward in a true 60s style. The track nests in your head and heart instantly, which is a key feature on `Heat Wave’ in general. The tracks ooze confidence fused with radiating appeal and panache.

Thundermother’s `Heat Wave’ fuses the band’s benchmark rock ‘n roll sound with more hit laden moments than ever before. It does not stray from the root of the band’s catalogue but merely displays the band’s impressive capabilities of crafting hammering rock tunes with enough spunk and melody to appeal to a wide audience. It is the perfect blend for any huge audience summer festival and arena. Thundermother comes out of the 2020 quarantine lockdown stronger than ever and will hit us all like an asteroid. Be prepared for some serious girl power!