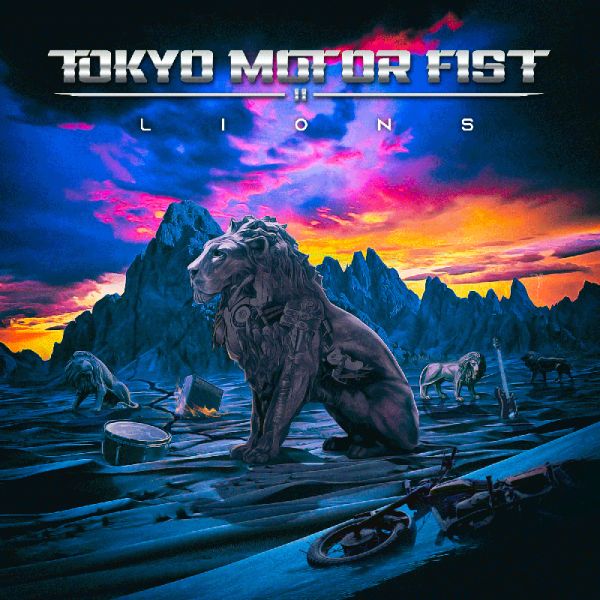 I did not mind the first album of Tokyo Motor Fist at all. Trixter guitarist Steve Brown teamed up with his long time friend Ted Poley (vocals and Danger Danger fame) and the duo added the very experienced rhythm section Greg Smith (bass-Ted Nugent) and skin beater Chuck Burgi (Rainbow) to the group. Okay, the album did not offer any new musical avenues but their energetic melodic party rock did have something about it, something that made you go back to the album time after time. And I have the same feeling with ‘Lions’, their latest eleven song album that is basically a pure continuation of that ‘Tokyo Motor Fist’ album but with even (here and there) some more class and substance. It is obvious to hear that Steve Brown is a bit of a Eddie van Halen fan (listen to opener ,,Youngblood’’ and ,,Sedona’’) but also this album has something about it. Yes, it is a party rock and roll album, with easy accessible choruses and sing along parts galore but it is played with class and it just blasts out of the speakers. I have never been a huge fan of Ted Poley but here the front man sounds like in his old days and reaches a very acceptable level when the band plays a few ballads like for instance the stunning title track ,,Lions’’ that is with ease the best song of the lot. The bulk of the material though is as straight forward as can be and brings back memories to the days that this kind of music had its heyday. There are no pretences here, it is uncomplicated rock music written and played by seasoned musicians who want their audience to just have a good time with rockers like ,,Youngblood’’, ,,Winner Takes All’’ or ,,Decadence On 10th Street’’. And like I said when Tokyo Motor Fist switches into ballad mode like on ,,Look Into Me’’ and ,,Lions’’, it might sound a bit slick and soppy but when you analyse the tracks a bit deeper it turns out that Tokyo Motor Fist do master a good ballad. A lot of people might find this kind of music old fashioned and out of date and in a way they might be right, but the fact remains that ‘Lions’ is a very decent and at moments excellent record!