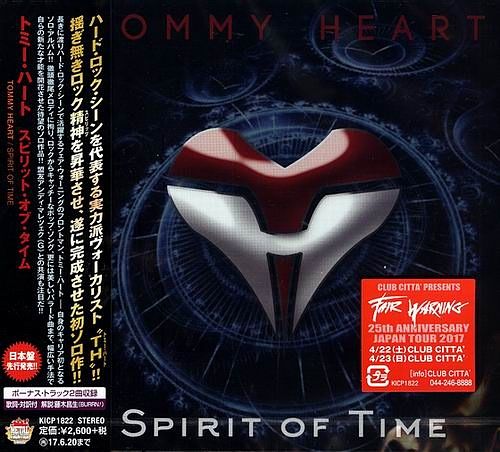 I managed to buy a Japanese version of singer Tommy Heart’s solo-CD ‘Spirit Of Time’. I am not a hundred percent certain who releases or has released this product in Europe/USA. It seems that a European release is imminent tough. Tommy Heart is no stranger to the European or Asian market. He has been singing in the German group Fair Warning for many years now and their products always were a big success in Japan. He also recorded with the bands V2 and Soul Doctor. Earlier this year he was involved in the project Kee Of Hearts with guitarist Kee Marcello and on that CD Tommy Heart expressed more ‘freedom’ in his singing as with Fair Warning the music has him a bit caught in a ‘concept’ sound developed by bassist Ule Ritgen and guitarist Helge Engelke (who has a small guest role on this CD). And also on ‘Spirit Of Time’ Heart profiles himself as a more all round rock singer. Tommy Heart has never been a main composer. On ‘Spirit Of Time’ most songs have been written by other people like for instance Tommy Denander and Jonas Reingold. It is a good custom that a Japanese version of a CD has one or two especially included tracks and ‘Spirit Of Time’ is no exception to that rule. The title track that opens the album is partly sung in the Japanese language while ,,Don’t Leave Me This Way’’ has a regular version and a ‘special mix’ version. I suppose Tommy Heart has built up a long list of befriended musicians through his long career as various German musicians (including guitarist Andy Malecek who played for years with Heart in Fair Warning) have made a contribution on various instruments. The music is a mix between melodic rock and AOR, is well structured and recorded and Tommy is with his voice the ‘binding’ factor. Still this CD does not make you feel that a real band has been at work. The record does not have a strong bunch of songs competing with each other. There is some fluctuation in quality to be noticed. In fact the best song on ‘Spirit Of Time’ is called ,,Help’’, yes, the song written by John Lennon and Paul McCartney. The Beatles’ original version has a lot of tempo but Tommy Heart has scaled that ‘speed’ right back. His version of ,,Help’’ is a beautifully sung and rearranged ballad that gives the song a whole new dimension. Really something that is worth listening to. As is the album because of Tommy’s impressive vocals and the excellent sound of it all. But in the department song writing some little hick ups are there so there we have it. A CD that has its moment but in my opinion does not reach its full potential and that is a pity.