TOMMY SHAW AND CONTEMPORARY YOUTH ORCHESTRA-Sing For The Day! 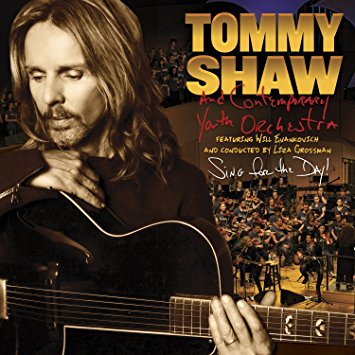 TOMMY SHAW AND CONTEMPORARY YOUTH ORCHESTRA-Sing For The Day!

Styx guitarist/vocalist Tommy Shaw has had a very interesting career (that is still ongoing). Obviously being a member of Styx brought him fame (and possibly fortune), he released a handful of solo albums, was part of the super group Damn Yankees and released a few CD’s with his Damn Yankees colleague Jack Blades under the moniker Shaw/Blades. Tommy has looked at his past and decided to record some memorable tracks with an orchestra. Not something that has not been done before by others artists (most recent example Foreigner) but when you look at the catalogue that Tommy Shaw has built up through the years and the hits he has shared with Styx the idea of reworking and revamping some of those classics is very defendable. For the song selection Tommy looked at several Styx albums like ‘Pieces Of Eight’ and ‘Crystal Ball’, his solo stuff and Damn Yankees tracks. To my surprise Tommy did not select any songs from his 1987 solo album ‘Ambition’, for me and many others his best solo effort ever. I must share a story from the past. Back in the day I was working for Aardschok magazine and somehow the ‘Ambition’ album was reviewed and published receiving only a 4 out of 10. When I got a copy of the album after the review was published I could not believe that review. ‘Ambition’ was and is a wonderful melodic rock gem and clearly reviewed by the wrong person. For many years the editor responsible for the review copped it from several editors declaring him to be a fool for such a blunder. It just goes to show that there really is no account for taste. Anyway, together with the orchestra and a big choir Tommy Shaw has created a 70 minutes masterpiece where spectacular versions of classic Styx songs like ,,Crystal Ball’’, ,,Sing For The Day’’, ,,Boat On The River’’, ,,Renegade’’ and ,,Blue Collar Man’’ have found a justified spot on the record. They have received a second lease on life together with the Damn Yankees favourites ,,Come Again’’ and ,,High Enough’’ mixed with some Tommy Shaw solo material like ,,Girls With Guns’’ and ,,Diamond’’. The influence of the orchestra and the big choirs have made some songs sound just as ‘heavy’ as the original version while Tommy’s singing and playing is quite impressive as well. Definitely a CD that Styx fanatics must hear! The idea might not be too original anymore, the execution is impeccable!