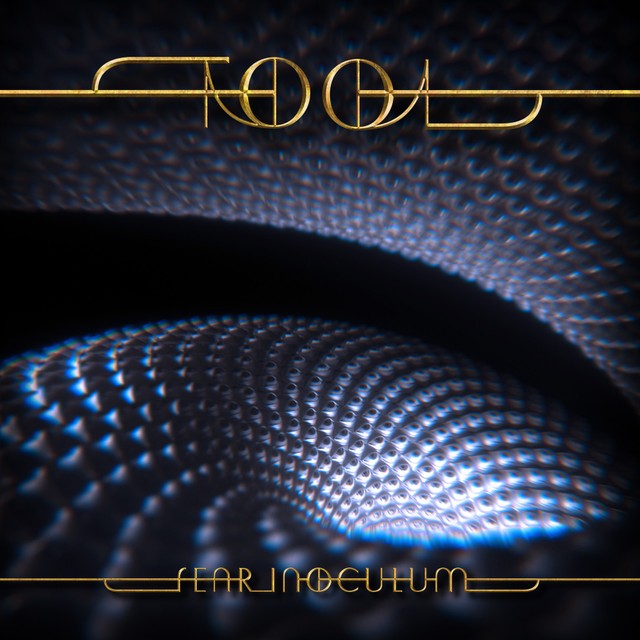 I admit to have a love-hate relationship with Tool. On one hand I am drawn to their emotive progressive metal and Maynard’s dramatic vocals, but on the other hand I dislike their psychedelic and semi-intelligent content. It is this rift between outer markers that I am boggled with, and when an album spends a decade in the making, I’m even more sceptic than ever. Topping off my personal scepticism is the absurd prices of the album’s special edition releases for those willing to obtain a physical copy of the album. But let’s cast aside all the jibber jabber in the sideline and focus on their new album `Fear Inoculum’.

As expected the new album is bold as brass, featuring all the ingredients making this a Tool record. The typical powerful and pervasive lurid progressive metal and rock melodies keenly structured against the deep melancholic pasted Tool sound with all musicians excelling. It is typical Tool, yet they also hammer in a profound experimental direction. 13 years since their `10.000 Days’, the tougher nut to crack, they seem to have reignited the `Lateralus’ sessions and invigorated it with the poise of their acclaimed `Aenima’ classic. Much like the two last mentioned albums, `Fear Inoculum’ also nested rapidly in my comfort zone of Tool dwelling. It paws in their heydays very much due to the enigmatic nature of Keenan’s vocal exercises and crackling howls. Added to complete the outpour are Danny Carey’s amazing prog rock patterns he almost randomly injects with jazzy shuffles and pulsating drum pauses. Timing is key and Carey clearly mastered the skills to throw off the listener with his intense drumming. Just check out how he implements a 5-minute long drum section in a sturdy propelling keyboard driven ambient section. Repetitively Carey switches low toned floor and bass drum interaction with cymbal play contradicting the obvious sound channels. It adds to the atmosphere so specifically emphasized by Chancellor’s intrinsic bass playing. Adam Jones being the last stakeholder colours the sonic palette with his dense riffs and penetrating solos. But much like the other members, the individuals don’t go out endless explorations of the sonic spheres. Focussing on the track they manage to maintain appealing as well as unravelling with unexpected 10 minute clocking themes. 7 tracks on the regular version unwind in sonic extravagance, with the special editions featuring a boggling variety of interludes and ambient sections tying the album together. The title track opens with meditating new age like orchestration. Tribal drums and instrumentation slowly build tension towards the oozing vocal introduction of Keenan. Everything just gels and glues without unloading metallic power. Frequently Tribe After Tribe comes to mind with the tribal driven pulling forward and the ‘chorus’ chanted in low key. Slowly but gently the track flowers at the 4-minute mark to return to the lingering essence. This off and on motion keeps you on edge and 5 minutes in the song suddenly unloads with tremendous power. Raw rounding riffs over slapping bass lines with drums excelling to make the track end with a grand finale as the hovering solo breaks into double bass blasts and steep hooked riffs. ,,Pneuma” revives the ,,Undertow” refining elements welded together with pulsating bass lines and contradicting guitar riff repetition scattering off the edges. The chants and outcalls of Maynard are like exclamation points to the musical extravagance. Another highlight is the climaxing power of the otherwise oozing ,,Invincible” and the absolute astonishing ,,7empest”. All 4 easily matching Tool’s finest moments and adding to the `10.000 Days’ marker in their discography.

Usually I tend to do a track-by-track breakdown of an album this intense, but even after 6+ spins the album keeps gripping with its enchanting arrangements. It is because of that I like to challenge listeners and readers to take the plunge and dive into the sonic ocean of Tool’s new album. Taking 13 years to craft, the album unravels in grandeur and with style. Though it doesn’t fulfil my high expectations, most of the songs sound equally mature as their finest tracks. It is all balanced out to the absolute max with every musician adding their personal best. More seasoned and more precise they dose their craft and marksmanship. It is all executed with perfection. But to be quite frank: it won’t win them new fans… it’s the oddity of self-wildness the band has adapted to apple as their marker.