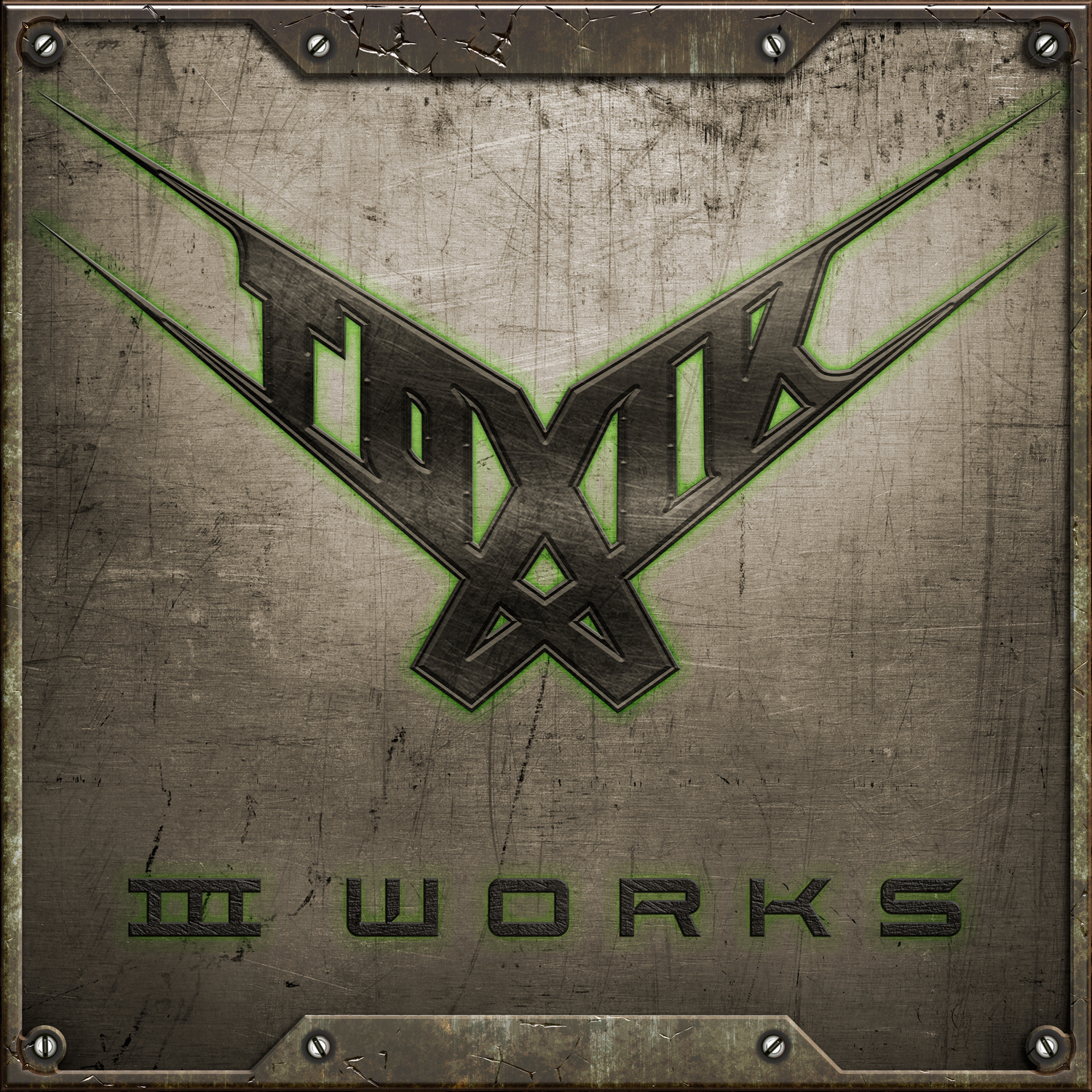 It has spent some time in the making and its eventual release passed us by in April of this year. Having ordered the “III Works” 3CD box set upon release I expected fellow reviewers lining up in hordes to review Toxik’s return to form. With that not happening and Josh and his band hitting Eindhoven for the third time within 2 years, I had to pick up my pen in order to review. Not only the fact that we’re dealing here with one of the finest techno thrash bands ever to have walked the earth, but also the fact that the box is released in close collaboration with Dutch No Dust Records. We cannot let this release slip by us without a decent review.
Cast aside the fact we have to review this due to our Dutch roots, we also have to highlight the CD set as it is a sign of life by a band returning to form. Toxik stunned the metal genre with their impressive release `World Circus’ and stormed the European stages, leading them on a glorious expedition at the infamous Dynamo Open Air Festival. The band’s follow up wasn’t as celebrated by the masses but most certainly appealed to me stronger than its predecessor. The intricate hooks and progressive speed was not of this earth and on top the band overthrown their music with social critic lyrics not dismissing politics and world order. Though most lingered back to the `World Circus’ days, I lean more towards `Think This’ as well as the new release, as it combines the best of both worlds.
Re-recording the band’s most classic tunes with new vocalist Ron Iglesias. But let’s run down the albums one by one to give you a better idea of what we have exactly.

`Works I – In Humanity 2014’ is built out of the band’s celebrated return with Mike Saunders (`World Circus’) at the helm. Still in pristine form the rough vocals and high pitches have withered nicely and with the band’s original line up baking him he delivers an impressive job. It all lines up perfectly, even though the production could have improved. Josh’s guitar work is impeccable as always and the man truly shreds magic on the tracks at hand. The powerful drum and bass interaction from Bill Bodily (bass) and Jason Bittner (drums), with its rocket speed combustion, is in full swing as the band releases their impressive technical thrash. Especially ,,Crooked Crosses’’ is a fine work of art displaying the band’s qualities. Excruciating fierce riffs brawl forward with Christian’s trademark crunchy riffs hitting like a freight train. The twisted and screwed up soloing is eponymous and bedazzles every player in the field. It has matured and Josh also injected a poise of modern day thrash and speed madness. Not following trends he steers the Toxik train on a rampage of likewise tracks. ,,Too Late”, ,,Program Insertion” and ,,Subverter” are all bearing the sign of the Toxik circus with `Think This’ era lurking around the corner. Though the following ,,In Humanity” is not up to par with the previous four tracks, it bears the typical Toxik ingredients and took more time to paw in my mind. It is just as intimidating as the bands classics while it shreds heavily with impressive chord progressions. The instrumental ,,Lunacy’s Fringe” stands isolated amongst these 5 tracks due to its somewhat thin production and less cohesive overall sound. It lacks the typical Toxik punch of all instruments aligning like storm troopers storming the battle zone. It’s this wrecking-crew magnitude the band has always held within their ranks. An unbeatable pack of technical abilities, complementing one another with spectacular interaction.

`Works II – Breaking Class 2017’ features the band’s recent release `Breaking Class’ that brings back Charles Sabin to the front. His higher pitched vocals are a turn off to many, but always attracted me as a listener. His voice is more balancing on the safer side, but also has the drive to bind you and take you up the ladder with Christian’s guitar swirls. With the band clearly adjusting to the format offered Josh and his men stayed between borders well defined. Less experimental, without losing the overall urge and progressive twists and turns. Most appealing in `Works II’ to me is the multi-layered approach the band set in on `Think This’ and which is clearly redefined on this CD. Revealing more of its intricate structures and layers with every spin the songs are more growing and crawling upon you over time rather than upon first spin. It’s a certain majestic touch propelling the tracks, like the low-ball groove in ,,Upside Down”. The song is raw and fierce with tempo plots severely disrupting your comfort at first. It’s again held together by impressive drum patterns, this time delivered by the gifted James deMaria, replacing Bittner. Shane Boulos’ heavy bass groove adds to the persistently toned and fierce ,,Stand Up”, the impressive ,,World Circus” ringing title track, and following and ditto impressive ,,Psyops” with tremendous force and thrive. Especially ,,Psyops” with its modern day political fringe, is on par with the band’s best work. With ,,Anthem”’ perhaps being their most thriving track bridging the pag between past and present.
Like on `Works I’ the band closes the CD with an instrumental, the fusion and jazz rooted prog outburst ,,Dreaming in Chrome” that I simply can’t give a place in the band’s catalogue. Or perhaps I just miss the awesome and sometime jaw dropping vocals from Sabin too much on this?

`Works III – Kinetic Closure 2018’ does exactly what the title suggests. Bringing in new vocalist Iglesias (no family of…), Toxik steers the mother ship through the past by lighting up a promising future. As proven reliable and forceful, DeMaria and Boulos provide an impressive and solid backbone to the band on which Christian can easily scatter his wild and outrageous riffs and structures. These guys simply don’t cave in and do not give an inch when it comes to perfection. Delivering just that is what they do on this 6 track record drawing from the band’s two previous albums, plus tow newer songs displaying the band’s intentions. Played live in studio in (mostly) one or two takes only, the band’s pristine live performance is captured just perfectly. Their exploding energy is unloading as it does onstage. The thrill ride starts with the impressive title track combining the forces of the past to unite with the present. On the spot Iglesias shines brightly with his impressive wide range and sublime high pitches. Belting an impeccable performance he takes us through the neck wrecking ,,Spontaneous”, leading to crowd pleaser per se ,,Heart Attack”. ,,Greed” still stands rock solid with both, its impressive progressive elements as well as it lyrics still being actual now as they were over 20 years ago. ,,False Prophets” and the title track of their second album really have Iglesias flexing his vocal chords. With utmost precision he delivers a daring performance in which he fuses Sanders’ and Sabin’s best performances, injecting them with fierce and modern allure. At times I would swear to hear both with Nevermore’s Warrel Dane present for the extra anger added. ,,Social Overload”, ,,Shotgun Logic” and the debut’s title track lead us to another new track; ,,No Rest for the Wicked”. It perfectly matching the many classics it reveals the immeasurable possibilities for future endeavours. I believe Mr. Christian will be able to create his most daring statement of all time with this reborn and new inspired line up of Toxik!

Oh, and let’s not forget to mention the cover art of this 3rd disc also fusing the band’s two albums together in cock smart modern artwork. Though the original artist (Ed Repka) and Josh Christian are fit to fight over the rights of the original album’s artwork and ideas for the cover art, Mario Lopez twisted up the original formats to a new and cohesive work of art.
With `III Works’ fusing past and present as well as uniting the band’s varied catalogue from demo’s as well as YouTube and recording sessions, no fan of the band may miss out on this action. With the addition of 3 tracks on the `Breaking Class’ disc, the band balances out the overall through put of the album, while on the first CD they manage to align stepping stones towards the band’s new found élan. That being said, the box set simply gives an all over experience and view of Toxik’s abilities and impressive musical legacy.