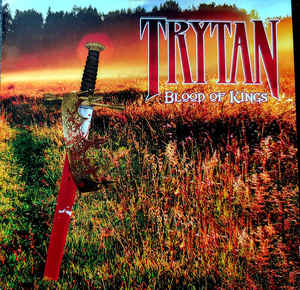 I could hardly believe it when my Dutch Facebook mate Jan Knapper send me a link to a new song from Trytan. Eh, the same band originally from Chicago as the one that released two progressive rock/metal records in 1987 (‘Celestial Messenger’) and in 1990 (‘Sylentiger’) to completely disappear from the scene after that? Indeed, the same band although not quite. Only guitarist/singer Lary Dean remained from the original line-up but he was and is the main man anyway. Although, let us not underestimate the role of new drummer Eric Gilette (The Neal Morse Band) who has his own studio where the band recorded this album and also took care of the outstanding production (in cooperation with Lary Dean) of this third Trytan album plus he provided keyboards as well. Completing the line-up these days is former Barren Cross bass player Jim LaVerde. Being away from the scene for some three decades has certainly not played havoc with the creativity of Lary Dean.

The man is a Christian and he is also a preacher. It is therefore no surprise that the lyrics on ‘Blood Of Kings’ are very religious. The CD-inlay contains all the lyrics and Lary Dean explains what each and every song means and how it came about. It is like reading an interesting interview. The songs are lyrically based on religious books and the Bible. That might not be everybody’s cup of tea perhaps but please do not let the lyrical content be an obstacle otherwise you might miss out on one of the best sounding progressive rock/metal records of the year! I know the year is still long but if you are into Rush (Dean has a voice that will remind you of Geddy Lee), Kansas, Dream Theater (the guitar tone of Dean has similarities with that of John Petrucci) and even Triumph you should treat yourself to a copy of ‘Blood Of Kings’. The songs are complex, the sound is at stages massive but very melodic. All instruments and (layered) vocals sound extremely clear, yet the overall proceedings are very heavy indeed and the songs are at times of epic proportions (total playtime 79.25 minutes). I actually do not know which tracks to point out?!

Maybe ,,The Descender’’ that opens the proceedings with a news flash about 9/11 before becoming a very exciting and very atmospheric track. Or closer ,,Revelation Song’’ where no less than two singers John Elefante (Mastedon/Kansas) and Sacred Warrior’s Ray Parra have a guest appearance? Or what to think about ,,The Godstorm’’ with some incredible and exorbitant guitar masturbation antics from mister Dean?!  And we have a title track that jumps into all kind of exciting directions. Just take your pick! Clearly this is an album that needs a few spins to grasp and understand what is happening as the songs are sometimes moody, full of expression, twist and turns, basically a release that demands the full attention of the listener. Let it come to you, let it embrace you and I am sure if you like above mentioned formations you will fall unconditionally for the charm and class of ‘Blood Of Kings’. In the progressive genre so far in 2021 with head and shoulders rising above any other release in the genre together with Kayak’s ‘Out Of This World’!