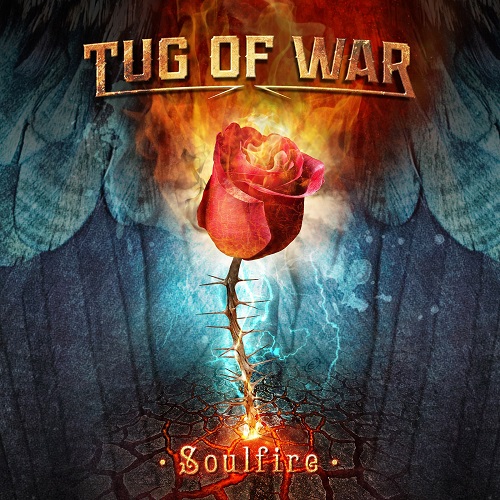 Is YouTube not a great medium toy to discover music and other things? Current Journey singer Arnel Pineda was discovered via YouTube and also Canadian vocalist BK Morrison got discovered after posting a few of his home performances on YouTube. It was Swedish producer/composer/multi-instrumentalist Tommy Denander (who needs no introduction does he?) who was impressed by BK’s vocals and one thing led to another. Morrison came to Sweden to record with Denander who had written a bunch of songs with BK’s voice in mind. A bit further along the track Escape Music owner Khalil Turk decided to sign this project and called it Tug Of War as the intention is to build a band around BK Morrison in the near future. The album sounds quite extraordinaire. The twelve songs on it not only showcase the immense vocal abilities of BK, the record is also extremely versatile. The songs are a rich mix of rock, hard/heavy rock, West Coast rock, a sniff of blues and AOR mixed and mastered by Brian J. Anthony (who also contributes bass parts) and produced by Denander and Turk. Several high class vocalists like Joseph Williams, Bill Champlin (both from CWF) and Chris Ousey (Heartland/Virginia Wolf/Snakecharmer) are forming the back ground vocals choir, so can it get any better? Not really. Denander has outdone himself as a composer as every single song is a pure gem itself. BK Morrison’s voice really has no boundaries either, he really proves here that in the melodic genre he is the upcoming man with a big reach, melody but also that necessary slight roughness in his voice. Favourite tracks? For me ,,My Soul Is A Ghost Town’’ is a pure favourite, it has a bluesy feel where the dreamy guitar part reminds me a bit of the old Robin Trower and where BK Morrison puts an enormous amount of emotion in his performance. Don’t get me wrong, the song is my favourite but there is so much more beautiful music, singing, guitar solos Denander style present on ‘Soulfire’. There is so much to discover and to enjoy. This is a record that is absolutely essential in a melodic rocker’s collection. Where do you find a record that sounds impressive from the first second until the last note dies down these days? Well we got one and it is called ‘Soulfire’ by Tug Of War. Remember the name and the lead singer BK Morrison because this is just the start of a career that could be quite successful.