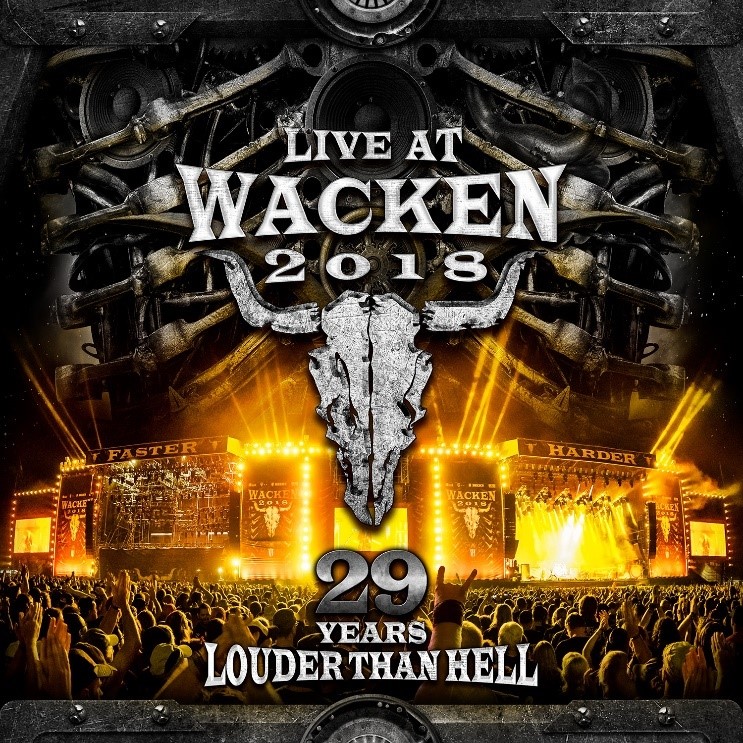 July 31, 2019 by Michel van de Moosdijk - More about our team
It has become a tradition for the organisers of Wacken Open Air to release material of the prestigious festival that yearly attracts some 75.000 fans from all over the world. This 2 DVD/2CD compilation is the 16th release in the 29 year history of the festival. It is an ideal opportunity to look back at an event that you might have visited yourself but also for people who were not able to attend for whatever reason (in my case it is the huge distance between Australia and Europe, to name an example). This way you at least get an impression of the atmosphere and the acts that performed there. Listening to the music and looking at the footage there are some things that are quite remarkable. First of all it is the enormous variety in music that is featured. Traditional metal goes hand in hand with alternative stuff, there are several acts there that sing in the German language, new bands get a chance to impress while the golden ‘oldies’ still have a home in Wacken and get a warm welcome from the fans. In Extremo is an alternative German rock band from years back and when you see how the audience sings the song ,,Sternhagelvoll’’ on their own while the band watches, it proves that even a band like In Extremo who have been around for years still has some relevance. And it also strikes me that there several more acts like In Extremo featured on the festival, bands that use different instruments like violin, flutes etcetera like Korpiklaani, An Theos and Ensiferum go down really well with the audience. And even a pop rock band like Stiff Little Fingers, who really seem to be out of place on Wacken, get the people going. There is also a lot of attention for ‘Krautrock’ groups like Schandmaul and Knorkator who sing in the German language. Not really my cup of tea but it is in a way quite amusing to see Knorkator with their weird costumes and a bald, tattooed singer who walks around in a glitter short pants only pretending to have a big boner all day long. Probably took a Viagra pill just before the show. Whatever tickles your fancy…Anyway, some golden oldies are still doing well on Wacken like Germany’s own metal queen Doro and the local Metal Tank Udo Dirkschneider with his band.  Other veterans that go down well are Riot V, Sepultura, the dirty sods from Steel Panther, Running Wild (hard to believe they are going), Helmet, Clawfinger and of course Helloween who for the occasion were accompanied by guitarist Kai Hansen and singer Michael Kiske during ,,Pumpkins United’’ (strong vocal performances from Andy Deris, Hansen and Kiske). There is variety galore on this compilation. People that like it a bit more heavy and extreme get their fill with Enslaved and Mantar, people that like it more melodic can fall back on Bonfire. But the band that steals the show on this release is without any doubt Nightwish with the fantastic vocals of Floor Jansen. The band’s version of ,,Ghost Love Score’’ is a pure highlight, beautiful special effects on stage and an immaculate performance overall. So there you have it, a close to 3 hour long look back at Wacken Open Air edition 2018, the home of metal and rock where every rock musician should have performed if they want to be taken seriously, even if it is just once in their career.