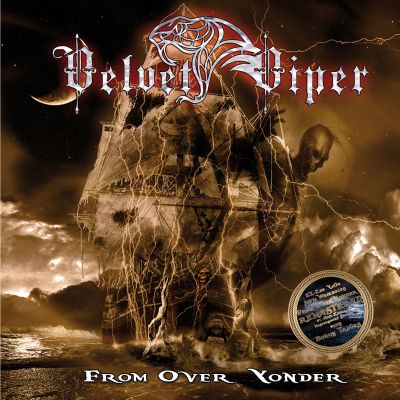 The year is 1988 when metal starts to shift shape when German band Helloween releases ‘Keeper Of The Seven Keys’ with modern metal being in an English stronghold from the NWOBHM movement, there’s a change at hand. Germany is taking over and their teutonic metal is morphing to a benchmark Euro metal sound which will embellish its initials in history. The refreshing new band around Kiske and Weikath is instantly attracting attention, but in their wake there’s another subgenre taking shape. Though ‘Under Jolly Roger’ by Running Wild is considered the first pirate metal release, but let’s not discard Zed Yago. Jutta Weinhold laid down the marks for a new genre with her band Zed Yago before Running Wild broke. ‘From Over Yonder’ featured undisclosed new elements that boosted the new wave of German metal. But not only that, Jutta and her band also planted the seed for female fronted epic bands.

Times were changing and US Metal took over slowly. NWOBHM was still dominantly present, but the US metal movement was launched and in its slipstream, Germany was lining up their new bands. Weinhold and her men released an impressive debut called ‘From Over Yonder’. Packed with powerful riffs and thunderous drums, the album broke waves. Weinhold however was the one that made the band stand out. Her charisma and intense vocals uplifted the album that will be reissued under the Velvet Viper banner in August.

,,The Spell From Over Yonder” immediately makes clear that Zed Yago was a force to reckon with. Powerhouse drums, insane riffs and Jutta’s vocals making the difference. Powerful, appealin and engaging. ,,The Flying Dutchman” explores the epic metal genre for the first time and without knowing, they strike gold. The title track adds tremendous power to the plate. Wailing with King Diamond reminiscent howls it opens and Weinhold takes the song to an insanely high level. The doom groove is ominous and the epic elements are slowly taking shape. It all links perfectly to the towering glorious battle track ,,United Pirate Kingdom” and the doomy riff driven ,,Stay On Course”. But in general, in between those glorious battle hymns, the album starts to enroll with more regular metal, but the seed is planted.

As displayed on this re-issue Zed Yago’s record was ahead of its time. Jutta leading her troop to victory in between all the US and UK metal bands, she became the unnamed flag bearer for a new style and subgenre. Just check out the excellent tracks on this record. ,,Revenge” with its eluding melody and igniting withheld pace, ,,Rebel Lady” as the “I Love Rock ‘n Roll” metal version, or the hymnic ,,Rock The Nation”. The additional CD re-issue tracks display the band’s live qualities as well as Juttta’s charismatic live appeal as a vocalist. But honestly, they do not add any extras to the legacy of the band.

‘From Over Yonder’ clearly stood the test of time even though it is now released under Weinhold’s Velvet Viper banner. Still, it is great to hear how refreshingly Jutta and her band where in those days. They pushed the boundaries and shot root to several subgenres. Thus, ‘From Over Yonder’ adds to the legacy and the re-issue does justice to the Jutta’s discography… even though it is Velvet instead of Zed.