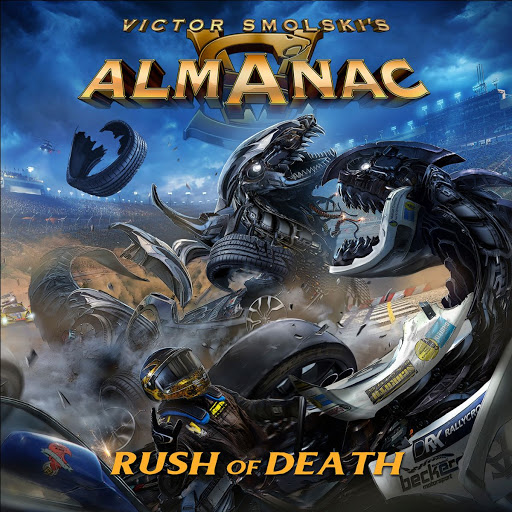 The first two Almanac albums were two great concept albums created by former Rage guitarist Victor Smolski, creating a musical cocktail between pure metal and classic rock where he had three singers colouring in his songs with style, class and panache. ‘Tsar’ and ‘Kingslayer’ are still albums that I spin around, especially because of the excellent vocals of David Readman and Andy B. Franck whose voices fitted perfectly with each other and lifted the music to a higher level. Smolski had the desire to make Almanac a full time thing and as both singers had other bands to consider as well they both left. Smolski engaged Patrick Suhl on vocals while Jeannette Marchewka got a bigger part. The rest of the band was replaced as well. ‘Rush Of Death’ is not so much a concept album. The first part deals with the topic of being a gladiator, the second part is more about race drivers. What they have in common is that both a gladiator and a race driver risk their life when they enter a ring or a circuit. Something that Victor Smolski knows all about as he is a fanatic race driver himself. ‘Rush Of Death’ however is by far not as good as the two above mentioned albums. The songs are more straight forward and heavier perhaps but this time lack diversity at times and are also one sided. There seems to be less melody present. And the new singer is not that superhot either. He lacks the variety that Readman and Franck demonstrated so clearly on ‘Tsar’ and ‘Kingslayer’. It is not that ‘Rush Of Death’ is a bad CD, there is enough good moments to enjoy, but this album just does not have the overall quality. Especially the middle part has a few very mediocre songs in for instance ,,Bought And Sold’’ (although the riff and solo kick ass) and there are other songs that just don’t do it for me. If you are into relentless straight forward heavy metal I would suggest to have a listen to ‘Rush Of Death’ but I am sure you will agree that it is not as good as ‘Tsar’ and/or ‘Kingslayer’.