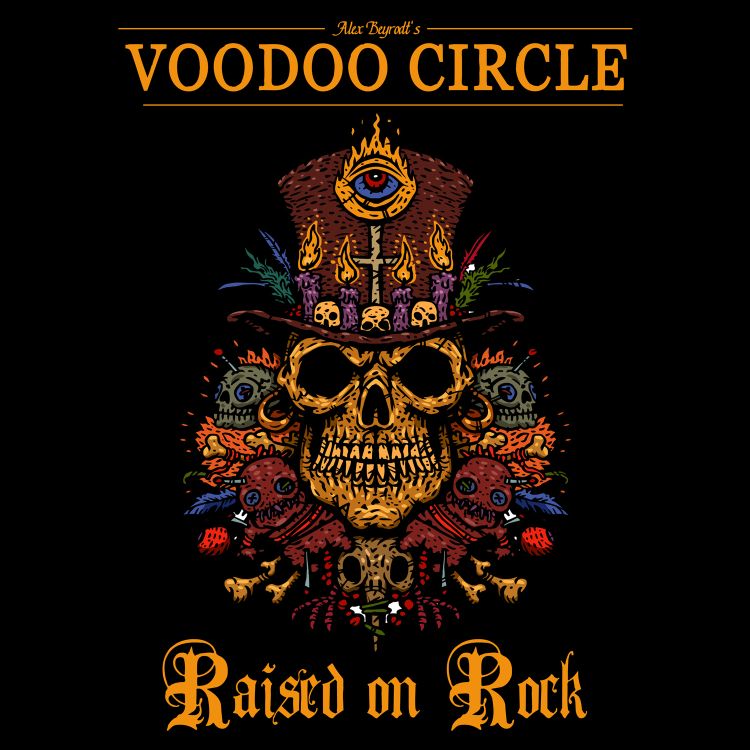 February 2, 2018 by Michel van de Moosdijk - More about our team

Although Voodoo Circle has had some changes in the line-up, the sound and style of the band on their fifth studio recording has not really changed a lot. Or has it? Gone are singer David Readman and keyboardist/singer Alessandro Del Vecchio, new is vocalist Herbie Langhans (Avantasia) while Corwin Bahn (Uli Jon Roth) provided the sounds on the keys, but he is not a permanent member of the band that is basically the baby of guitarist Alex Beyrodt who earns his keep most of the time with Primal Fear as do bassist Mat Sinner and drummer Francesco Jovino. This rhythm section has been for some time part of Voodoo Circle as well as Primal Fear. Sinner and Beyrodt have taken care of the production while the experienced Jacob Hansen mixed and mastered ‘Raised On Rock’. The last CD of Voodoo Circle entitled ‘Whisky Fingers’ was featured in this web magazine and the conclusion in 2015 was that the record did not sound very original but had quality songs and excellent musicianship. In a way the same can be said for ‘Raised On Rock’. Alex Beyrodt has never denied the fact that Voodoo Circle is a sort of a modern combination of bands like Deep Purple, Rainbow and Whitesnake. The ghost of people like Ritchie Blackmore and especially John Sykes during his Whitesnake days is all over ‘Raised On Rock’. I mean, listen to ,,Where Is The World We Love’’, it is just if Sykes himself is playing. But don’t be fooled. With the addition of Herbie Langhans the sound of the band has changed a bit. The overall sound of Voodoo Circle has become a bit more ‘rough around the edges’ thanks to Langhans’ voice. ,,Unknown Stranger’’ and ,,Ultimate Sin’’ are two examples of ‘rough and ready’ rockers where the expressive voice of Herbie Langhans just gives the band a ‘heavier’ accent and for me personally it gives Voodoo Circle an welcome boost of energy and pure power. Although David Readman is one of my favourite singers from the last decade or so I must give the band and their new singer an enormous portion of credit. The change has worked out well for Voodoo Circle. They have not lost an inch of their identity and gained some substance. The album might sound familiar but is an excellent example of the classic and melodic hard rock that most of us grew up with. Oh yeah, Voodoo Circle has with ,,Dreamchaser’’ produced one of their most prolific and best songs so far. That epic song Rainbow/Purple flavoured track alone is already worth getting this album for. “Raised On Rock’ is truly an excellent and up to date record of what classic rock should sound like in 2018!