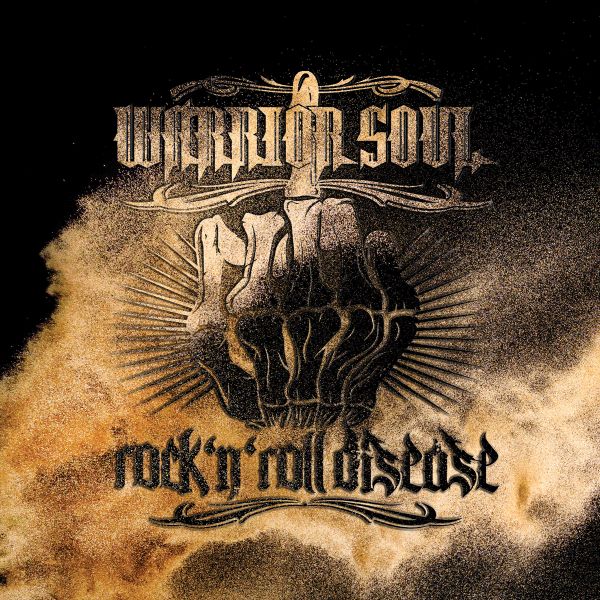 Actually, the new Warrior Soul album comes as a surprise to me. That’s because I saw Kory Clarke perform twice under his own name and on that occasions I didn’t find it very impressive what he did on stage. His voice was very hoarse and didn’t sound anything like in the days of the fantastic first albums ‘Last Decade Dead Century’ (1990), ‘Drugs, God And The New Republic’ (1991) and ‘Salutations From The Ghetto Nation’ (1992). The album ‘Chill Pill’ wasn’t bad either, but different. After that, I lost my interest in Warrior Soul, although Kory Clarke persisted in bringing out albums. When everybody thought Warrior Soul was over, he continued with the nice album ‘New Rock Underground’ (2000) by Space Age Playboys (only for that name he got bonuspoints!), named after a Warrior Soul album from 1994. Fast forward to 2009 when he released ‘Chinese Democracy’ (aka ‘Destroy The War Machine’ or ‘…And We Rock And Roll!’) Are you still with me? Okay, continue with ‘Stiff Middle Finger’ (2012), ‘Tough As Fuck: Live in Athens’ (2016), ‘Back On The Lash’ (2017) and now ‘Rock ‘N’ Roll Disease’.

This new album, the first I heard after ‘Chinese Democracy’, is as some might say: pure Rock ‘n’ Roll. That, my friends, covers the load pretty good. What you get are eight filthy, dirty, rock ‘n’ roll tracks from a guy who changes bandmembers more often than his underpants. There might be nothing much left of the band that once shared the stage with Metallica and Dio, the band that played at the Aardschok festival, Dynamo Open Air or Donington, the band that was known for its anti government/establishment lyrics, but having said that, this new album, ‘Rock ’N’ Roll Disease’ is not bad at all. With the first track ,,Up The Dose’’, Kory and his bandmates are putting me directly on the wrong track with a complete AC/DC rip-off but after that you are treated to some old-skool Warrior Soul tunes like ,,Off My Face’’, ,,War Ride Children’’, ,,Meltdown’’ and my favourite, ,,Going Mental’’. So this new Warrior Soul album is for the fans; the old ones like me and the new ones who still have the opportunity to see Warrior Soul on stage somewhere. Check out ‘this ‘new form of old rock’ as Kory Clarke describes it in the interview Raymond Helebrand did with him for Headbangers Lifestyle and that you can find here.