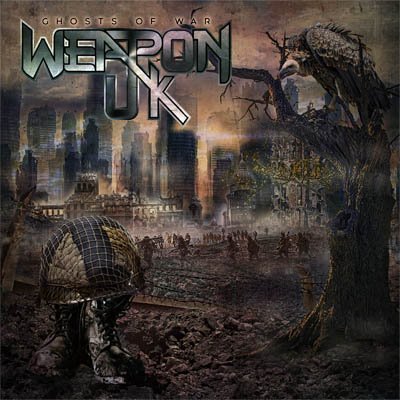 September 5, 2019 by Michel van de Moosdijk - More about our team

For the first time in a while Weapon UK comes up with a new studio record. Founding members Jeff Summers (guitar) and vocalist Danny Hines have been active for some years now with currently bassist Tony Forsythe and drummer Darren Lee helping out. The 2014 CD ‘Rising From The Ashes’ was re-issued by Pure Steel in September last year so it has been a while before fresh material was available. Weapon UK has a long history, the band was an important part of the New Wave Of British Heavy Metal and their song ,,Set The Stage Alight’’ was one of the best of that era (it is featured in a strong in 2017 re-recorded version on the limited vinyl release of ‘Ghost Of War’) but that was then. Today Weapon UK still has some of those old elements in their sound but it would not be fair or accurate to describe this record as an attempt to re-live the old days. Today Weapon UK mixes classic hard rock with more modern features. Especially the Irish flavoured title song and the closer ,,G.O.W. (Reprise)’’ shine a different light while in between songs like ,,Queen Of The Ride’’, ,,Emerald God’’, ,,Tournique’’, ,,Redman’’ (half ballad/half rocker) and  ,,Hell On Earth’’ are solid rocking metallic flavoured songs that establish Weapon UK as a nowadays outfit. Strong guitar work by Summers, solid vocals by Hynes, cast iron drums and bass embedded in a sometimes simple yet effective song structure. The production of the album is kept pretty sober, no gimmicks, no tricks. This album is in my opinion good enough to give Weapon UK a solid base to continue their career for some time to come! Another example of a band that has blossomed throughout the years and still has something relevant to contribute!