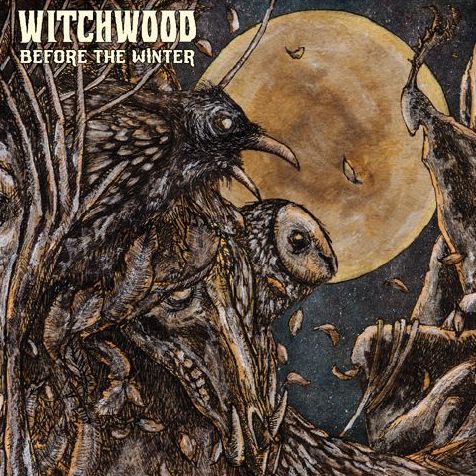 And now for something different! Starting out some years ago as Buttered Bacon Biscuits the Italian band Witchwood has six musicians that have taken each an artist name to make communication with the outside world easy. So we have here Ricky (vocals/guitar), Sam (flute and harmonica), Steve (keyboards), Woody (lead guitar), Cello (bass) and Andy (drums) forming an alliance that chose to go back to the seventies for their main influences. When you hear the music you might start thinking about Jethro Tull because of the fact that a flute plays a part in the music but Witchwood is heavier, more melancholic, atmospheric and mystic. Sure, you hear a bit of Deep Purple, some Led Zeppelin and more acts from the seventies but on their third album these guys have found their own little corner in which they play around and try to reach some listeners.

They do that quite impressive as well. An atmospheric tune like ,,A Crimson Moon’’ with its melancholy character, mandolin, flute, organ and sophisticated singing might not strike you straight away but it is a beautiful song that is in contrast with some of the other tracks. Yes, this sounds very vintage seventies but it is very playful, intense and at moments intriguingly heavy yet melodic. In the past Witchwood already produced the albums ‘Litanies From The Woods’ (in 2017 re-released by Jolly Roger) and ‘Handful Of Stars’ but it is fair to say that on this album the six dudes are enjoying their finest moment yet. This might not be everyone’s cup of tea but I just love this kind of sound and old fashioned style. The production is kept very clear so all instruments, vocal passages and arrangements come to full bloom. Should I mention that some songs are somewhat extended at times? Maybe only suited for a selected audience but if you like a joint and some old fashioned tunes and sounds ‘Before The Winter’ is an album you could be interested in. Different for sure but absolutely entertaining and severely intriguing! By the way, the vinyl version has a bonus track called ,,Child Star’’.