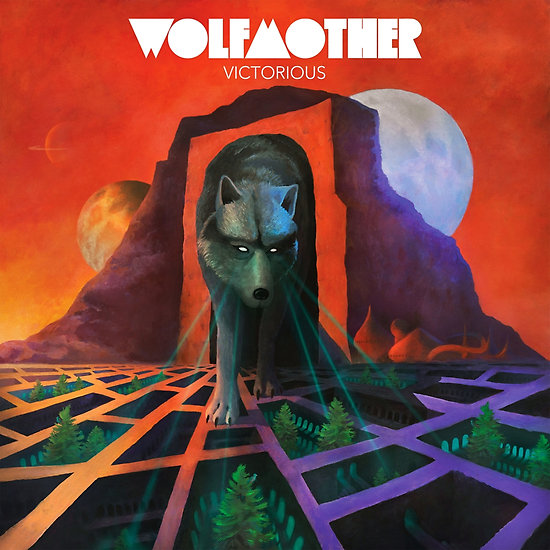 It is already more than eleven years ago since Australia based Wolfmother released their epic first CD? Yes, it is. Their combination of heavy rock and pure psychedelic in combination with the high pitched voice of guitarist/singer Andrew Stockdale was more than well received and brought the band some serious music awards. Since that album Stockdale has been more or less the main man. He released two more ‘band’ albums and in 2013 came with his solo effort ‘Keep Moving’. For the recording of the fourth Wolfmother album the band relocated to the United States to record with producer Brendan O’Brien (Pearl Jam). The band relocated? Stockdale did. He used session drummers Josh Freese and Joey Waronker to play drums, played guitar and bass himself and Ian Peres (the current bass player/keyboardist) was only asked to provide keyboards. Wolfmother is Andrew Stockdale and the other musicians in the band are more or less hired hands that (if necessary) are expandable. The first single ,,Pretty Peggy”, that you might have heard by now on You Tube, is not really speaking for the rest of the CD. It is an acoustic based pop/love song that in my opinion is a complete failure. Also ,,Best Of A Bad Situation’’ makes me wonder if Wolfmother is moving away from their so unique musical approach. But the rest of the CD is as always great. Stockdale is an inventive songwriter who delivers a recognisable sound and in some ways this album comes close to that epic debut with songs like ,,Gypsy Caravan”, ,,The Love That You Give”, ,,Eye Of The Beholder” (listen to the weird changes in rhythm) and ,,Victorious’’. Another small point of critic is that the album with just ten songs is a bit on the short side. Maybe Stockdale is more a guy who likes it ‘short and sweet’. ‘Victorious’ is an album that will help consolidate Wolfmother’s position as being one of the top Australian bands that means something outside Australia, but one or two more top tracks would have been welcome.