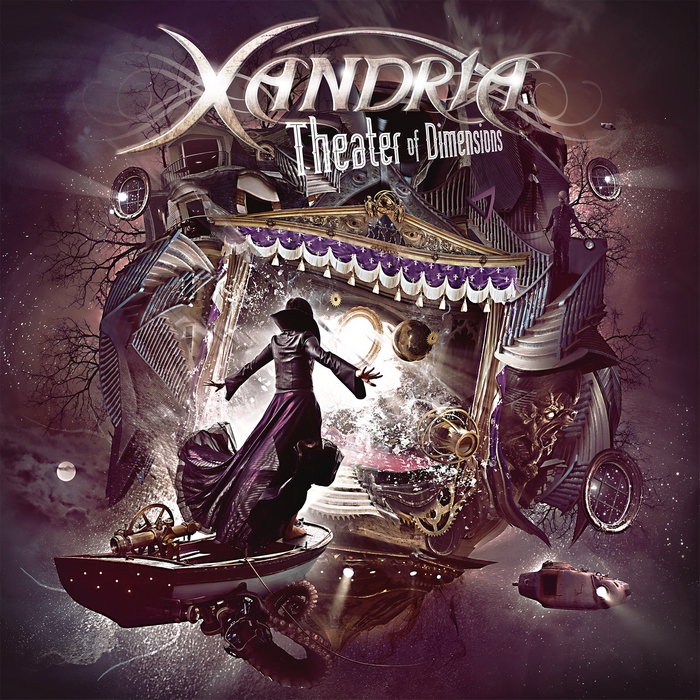 In a land of symphonical epic metal, Nightwish and Within Temptation are likely considered king, with Epica as a solid heir to the throne. Without discarding many of the fine talented acts in the genre, these bands are ruling and redefining the genre with their releases. The tree of the gothic epic metal scene is growing rapidly and branches are reaching further into different directions. Combining influences from classical music is benchmark; extending reach into cinematic soundtrack scores was an expected evolution suiting the genre perfectly. Xandria is the best example of this crossover, reaching further than any other band in the genre. Their newest effort `Theater Of Dimensions’ displays the bands thrive towards perfection expanding their influences into that exact direction. Their (already) highly cinematic predecessor `Fire & Ashes’-EP is topped on all accounts with this brand new release, orbiting the status of the German band around guitarist Marco Heubaum. The band has gained momentum and the rhythm section certainly adds fuel to the fire. Lamm’s double bass roars and his captivating drum breaks with polyrhythmic shuffles are vigorous and powerful. Load riffs and fierce twin interaction from Heubaum and Restemeier pull forward in high gear. The bands captivating pompous outbursts sound more victorious with dominant keyboards swirls in the front of the mix topped off by large choirs and chants. Combine the dramatic overhaul of James Horner’s movie scores with the fine-tuned feeling linking images with music known of Hans Zimmer’ most impressive releases. Xandria manages to shuggle close to the grandeur of `Pirates of the Caribbean’-movie scores without losing sight of the harder and louder edge needed to keep us focused throughout the entire play in this three dimensional theatre. Focal point in all this symphonic violence is the classical trained Dianne van Giersbergen with her powerful high-pitched soprano voice. She uplifts Xandria’s jaw dropping action packed songs, although it sometimes might strike a nerve. Absolutely magnificent are the less pompous tunes in which the band shifts back in gear. ,,Forsaken Love’’ is an example of sheer brilliance with van Giersbergen opening all registers belting an impressive performance. Her soprano voice shifts to falsetto easily but truly warms the soul when it goes in the lower register. Her voice links perfectly to the moody piano before storming upward. The overall pace is high with Dianne displaying her impressive vocal capacity and the band spitting flames. The band’s first single ,,We Are Murderers’’, featuring Björn Strid of Soilwork, is an excellent example of their fine tuned feeling for drama and the propelling power with the loud outbursts of Strid contrasting with Van Giersbergen’s crystal clear voice. This harsh contrast works perfectly enriching the band’s sound. Dramatic and epical, juggling emotions in cinematic theatrical perfection. The track is an emotional rollercoaster-ride and a perfect teaser of the album in general.
Not going on a track-by-track review it is hard to discard the sheer wonderful moments at hand. ,,Dark Night Of The Soul’’ again is a more timid rendition and these slower movements are needed to withhold the album’s high pace and killing off the overhaul of high-pitched power. Awesomely orchestrated with a lush atmosphere it paves way for excellent soloing from the guitar tandem. ,,Ship Of Doom’’ grips back to the band’s typical high pace spectrum and combines with the here for mentioned Pirates soundtrack. An absolute highlight is ,,Burn Me’’, not immediately fitting the bands pompous format but displaying another side of Xandria rooted in classic rock. It combines the best of both worlds and works perfectly. Other tracks worth checking out are ,,Death Of The Holy” and ,,Queen Of Hearts Reborn’’ without picking favourites. The 14-minute epical ,,A Theater Of Dimensions’’ is wrapping up the band’s 74-minute long album, summarizing the full hour of music preceding the title track. Being a fan of metal’s widest spectrum, classic rock and classical music, Xandria is appealing being exactly that. I’m aware their music comes across pretty harsh to some listeners and the vocals at times are an attack on ones nerves being executed in highest classical regions, but Xandria and Van Giersbergen manage to create some magical moments with ear mingling melodies and captivating action packed performances. The interaction is perfect and the compositions are cinematic and pompous.
Convincing those in doubt might be the 2CD version of `Theater Of Dimensions’ with the second CD featuring acoustic versions of 5 Xandria songs, old and new. All 5 re-arranged and performed in timid setting. ,,Call Of Destiny’’ and ,,Dark Night Of The Soul’’ mainly leaning on piano and vocal interaction, string sections being added keenly, creating a dense and warm atmosphere. ,,In Remembrance’’ and ,,Sweet Atonement’’ performed on acoustic guitar and piano/strings. ,,Valentine’’ is happy-up tune with chants and a fun vibe radiating off the edges of the CD.  Definitely worth checking out!