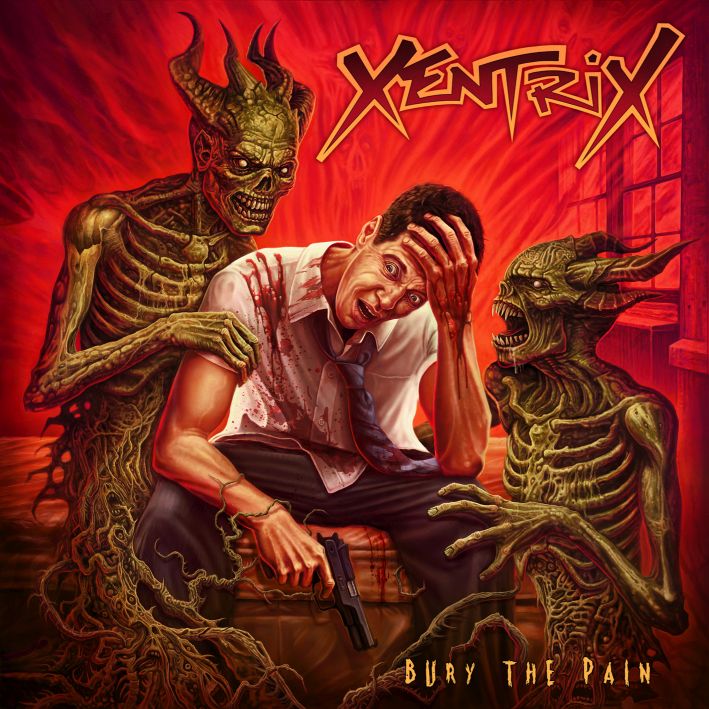 Xentrix was founded in the North West of England in 1985 and came to my attention in 1989 with their debut album ‘Shattered Existence’. This was a very good thrash metal abum which you might try to get your hands on, just like their following EP ‘Ghostbusters’, with hilarious artwork. Yes, it was a cover song from Ray Parker Jr. Ghostbusters soundtrack. It did put Xentrix on the global heavy metal map. Back in the days I saw them in the Marquee club (RIP) in London and in the Willem II in Den Bosch with Annihilator. After that they released the full-length ‘For Whose Advantage’ in 1990. That was the last real achievement of Xentrix, because in my opinion the albums ‘Kin’ (1992) and ‘Scourge’ (1996) are far from the same quality as their first two. But now it’s 2019 and much to my surprise here is a new album, called ‘Bury The Pain’. With two of the founding members still in the band, Kristian Havard (guitar) and Dennis Gasser (drums), together with ‘new’ guys Jay Walsh (vocals, guitar) and Chris Shires (bass), they deliver a surprisingly good thrash metal album. They are going back to their roots which is a clever move because it was their most successful period. Songs like ,,Bleeding Out“ and ,,World Of Mouth“ remind me of the mighty Grip Inc.. Jay Walsh performs well and you can hear he is an experienced guitarist. Yes, he was a member of Blaze Bayley’s band. With Walsh and Havard Xentrix has a great guitar tandem that delivers cool riffs and some nice solo’s. Dennis Gasser and Chris Shires also know what’s been expected from them and keep the tempo up and fill every hole on this album. Add to this the production of Andy Sneap and the mastering from Russ Russell (Napalm Death, Dimmu Borgir, The Haunted) and you know that ‘Bury The Pain’ is a thrash metal album that sounds perfect. A surprising good come back album by these veterans in the thrash metal scene. So if you dig thrash metal you will be in good company with this new Xentrix album ‘Bury The Pain’. Welcome back!