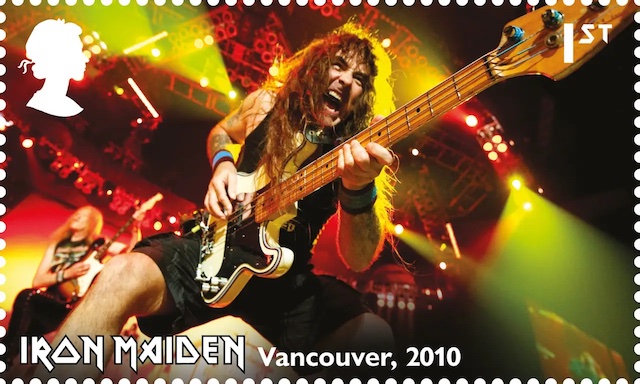 I’m sure that when bass player Steve Harris founded Iron Maiden in 1975, it never crossed his mind that 48 years later he would feature on a stamp. A small piece of paper if you will, with a certain design on it [mostly a silhouette of the king or queen in the old days] that you stick on a postcard, a package or a box and it shows the fee that has been paid for sending the object.

THE USE OF A STAMP

How many people actually use stamps on a daily basis these days? The pen pal era is long gone and forgotten, also the annoying but very popular chain letters trend we had back in the day is outdated, thank God! Although our e-mailboxes still aren’t safe from spam and scam. We also used to send postcards from every foreign country that we visited and let’s not forget the pile of Christmas cards every year. Oh, and of course there were fan clubs to correspond with and how about the zillions of fan mail with gifts that travelled in mail bags all over the world to eventually [hopefully] be plopped on the doormat of a favorite artist?

Actually, there were so many reasons to get out the door, buy a stamp and send something to someone. And let’s not forget that at one point it was very popular to collect stamps in this ancient era.

But is the old-fashioned stamp an actual dying thing in these modern, digitalized times? First of all, if you send something today, digital franking is the most common thing to do. Further, we have Facebook to keep an eye on family, friends, our favourite artists and vague acquaintances. We send birthday wishes, Christmas greetings and “hello, how are you?’s” via Whats App, DM, Messenger and sometimes per text messages or e-mail. It is quick, easy and also a money saver, I guess. And while our mobile phones keep bleeping and buzzing throughout the day, the physical mailbox remains silent most of the time.

Is it Iron Maiden that will break the silence of our front door and give the old-fashioned stamp a bloody good kickstart? Probably not, but the fact that Royal Mail is honouring and celebrating one of our ‘New Wave Of British Heavy Metal’ heroes with a set of 12 special stamps and collectables is by far a historic milestone in metal history. And the guys deserve it. Because Harris and the boys have really stuck to their guns for 48 years now, having their VIP mascot and shapeshifter Eddie unconditionally by their side [and who gets his own stamps as well]. They left a huge and important footprint in the music bizz.

I remember when Iron Maiden released the self-titled debut in 1980 and `Killers’ in 1981, followed by the smash hit album `The Number Of The Beast’ in 1982. These albums knocked me off my feet and are still some of my favorites! The entire discography of Iron Maiden is without a doubt impressive, as well as the intense touring schedule they’ve pulled off over the years, not to mention their incredible crew and loyal devoted fanbase.

The Maiden guys will continue their heavy metal crusade as they have done for more than four decades. Yes, our heavy metal super heroes are unstoppable and they are getting ready for their next adventure around the world: The Future Past Tour 2023. Hopefully Steve, Bruce, Dave, Adrian, Nicko and Janick will find a minute in their full tour schedule to buy an actual postcard to send to their loved ones.