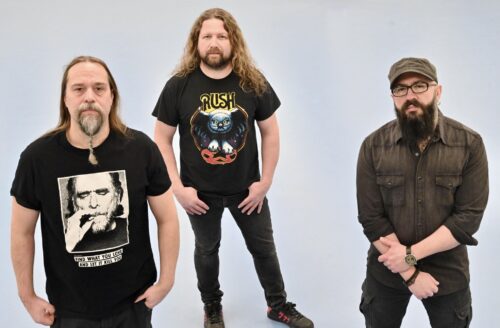 What You See Is What You Get

Swedish singer, guitarist, bassist Christian Sjöstrand is better known to the music world as ‘Spice’. The man who once fronted Spiritual Beggars and The Mushroom River Band but also Kayser and Spice And The RJ Band, the predecessor of Band Of Spice. Earlier this year Band Of Spice released its fourth album through Scarlet Records ‘By The Corner Of Tomorrow‘. HeadBangers LifeStyle thought it was time for a short Q&A with ‘Spice’.

Hi Spice, let’s start with an obvious question. How did you get the nickname ‘Spice’?
,,I got that name when I was a young boy. My friends noticed that I like to spice up my food at the school lunch, every day. I still like it hot.’’

You’ve been an important member of bands like Spiritual Beggars, The Mushroom River Band and Kayser. What made you decide to go for your own band, Band Of Spice, in 2010?
,,Kayser started as my band but I kind of let the others come in with their ideas. By the recording of the second album I felt that I wanted to go on and do my thing all the way. So I started SPICE and The RJ Band. Recorded two albums under that name then I changed it to BAND OF SPICE. So I actually started this band 2006/2007.’’

What was the plan when you started Band Of Spice, if there was any?
,,To follow my vision, whatever it will take me. Not to compromise and to never use click tracks when recording drums.’’

Is there something Band Of Spice has that all your other bands hadn’t?
,,An excellent bass player.’’

With ‘By The Corner Of Tomorrow’ you’ve delivered your fourth album. Is there anything you’ve done different this time?
,,The only thing that comes to mind is that I chose to record it in E standard. I had never done that before.’’

Band of Spice is a trio so there is no way of hiding. Is that something that makes it extra interesting / challenging for you?
,,What you see is what you get. Maybe. I like it because it’s less people to deal with.’’

What are the ingredients for a ‘typical’ Band Of Spice song?
,,My lyrics… I don’t know.’’

How could we recognize your way of song writing?
,,I would say my lyrics again. Other than that, I don’t like to repeat myself. I do not have the urge to do the same album over and over again.’’

Can you take us through the song writing process?
,,I write everything on my white Fender guitar (not plugged in.) Sitting on my sofa with the TV on.’’

When do you involve the other two guys?
,,When I feel I have something worth trying. I usually bring two or three songs each time. Bob [Ruben-drums] and Alexander [Sekulovski-bass] are excellent musicans so I let them have their touch on the songs.’’

Your preference are the heavy 70s early 80s metal. How and when did that start?
,,I don’t remember. It started with Elvis when I was 4 or 5 years old. Then I discovered AC/DC, Black Sabbath, Dio, Metallica, Slayer and more.’’

Who are your biggest influences as a musician?
,,I would have to say Tony Iommi. But John Frusciante is also up there.’’

When did you know that you wanted to become a musician (singer, guitarist, bass player)?
,,At the age of 7.’’

Which song on ‘By The Corner Of Tomorrow’ stands out for you and why?
,,,,The Fading Spot’’ and ,,Rewind The Wind’’, because of the images and the memories of what the lyrics mean to me.’’

The album is out since March of this year. What have you’ve been up to since then?
,,Writing a lot of new songs. We are recording a new album right now.’’

How frustrating is it to have a new album out and unable to promote it live?
,,Not that much. I took this lockdown as a opportunity to write a bunch of new songs. We actually could have recorded a double album. But unfortunately we have not the budget to do so.’’

What are your plans for the immediate future and for Band Of Spice?
,,To record and finish this new album, then hopefully get out and play.’’