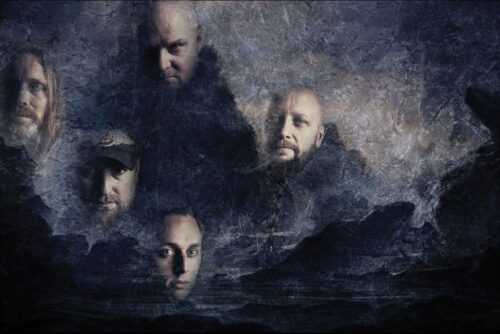 One of the best metal albums released this year is by Danish metal band Statement. Their fourth release ‘Dreams From The Darkest Side‘ excelled in song writing, musicianship and production, but that is only my humble opinion. Reason enough to contact Martin Poulsen, bassist of this talented quintet.
To celebrate the new album a spectacular album release party was held in their hometown of Copenhagen.

,,It all went very well, we went crazy with a lot of stuff’’, says Poulsen. We had a lot of pyro, at one point we even had a Harley Davidson on stage. The Royal Danish Drum Corps, of which our drummer Daniel [Nielsen] is a member, was there to perform a song. It is all filmed and we have all the separate tracks on audio. Unfortunately the computer messed up on the second last song but we can work that out. We had seven camera’s and we hope to have something ready in the first half of 2023 to send out.’’

,,WE DEFINITELY WORKED MORE TOGETHER’’

The lyrics are dark, heavy and personal. Is that the result of the last couple of years which were dark, people were lonesome and thrown back upon themselves?
,,It reflects that period too. We started composing songs at the beginning of 2020 so we had a lot of time. This time we wanted to have everything perfect before entering the studio. I think it shows. The lyrics are predominantly Jannick [Brochdorf]’s work. We sometimes help out with the details. They are personal to him, but sometimes songs are just songs.’’

Since the start in 2011 and the first album ‘Monsters’ in 2014, the way of song writing changed.
,,Traditionally, on the first two albums it was Niels [Alex Larsen, lead guitar] and Jannick. On the third album ‘Force Of Life’ [2019] we started to work a bit more as a unit but it was still mostly Jannick and Niels. This time we definitely worked together. The idea for the song ,,Escaped’’ comes from Daniel who started it on his snare drum. And I think Lars [Ulrik Le Fevre, guitar] came up with the riff for ,,The Reaper’’. A lot was created during jams.’’

Comparisons are made with countrymen Volbeat. Does that bother you?
,,Volbeat are great. What they have done for Danish music is insane. I remember seeing them in a very small bar in the centre of Copenhagen at the start of the millennium. They were playing for 20 people back then when nowadays they play for 30/40.000 people. That blows my mind. What they do is amazing.’’

There are ten songs on the album. Is that all you had written or did you have to choose?
,,We had to choose. We kind of knew how much we could do within the studio time we had. This time I think it was 10 days, the same as last time. With Soren [Andersen, producer] knowing how he works and how we work, it meant one song a day. We had 12 songs and two were cut. We had the drums recorded for one of them, so that song might end up on the next album. The other one was in line with ,,Lifeline’’ and ,,Beyond Control’’, a bit softer, poppy if you like, so it was logical to remove that one.’’

This album, like its predecessor, is produced by Soren Andersen. What makes him the perfect producer?
,,‘Monsters’ we did ourselves because… why not? ‘Heaven Will Burn’ was by us and Tue Madsen who has also done a lot of epic stuff, like death, hardcore. For ‘Force Of Life’ we went with Soren which turned out to be a great move. He is so calm and I don’t know anybody who speaks bad about him. He takes his time, is super patient. When it is your time as a bass player you know you only have limited time, it is no lead guitar. His fingerprint is all over the record, as it is on ‘Force Of Life’. The electronic stuff, the percussion in the background which you notice when you have your headphones on. His knowledge of vocals and harmonies is amazing. We have always done a lot of vocals and harmonies, but when he got into it, it just escalated. He is an expert in guitar harmonies, a good guide and simply put: he knows how to make a good song. He didn’t make many changes but the ones he made are significant.’’

What is the main ingredient for a Statement song?
,,Most of the songs are about the melodies. In general, we have riff based songs and melody based songs. Riff based are songs like ,,Indestructible’’, melody is like ,,Lifeline’’. Both are great and catchy but the catchy ones get stuck a bit more.’’

Did the album turn out the way you had in mind?
,,Even better. We had expectations, wanted to make it better than the last one, that is always the goal. Of course I listened to the final mixes, looked at the artwork but when I got the CD and listened to it, I was like ,,wow, is that us?’’. That shocked me, blew my mind. We had the fortune that between the recording and the final product there was a long gap where nothing really happened. Everything was done but we couldn’t do anything with it. I didn’t hear the songs for six months but when I heard the whole album for the first time….just wow.’’

Listening to the album turns out to be a very nice listening experience because of the way it is built up.
,,Niels is great with order, he is also in charge of the live setlist. We’ve tried it, but it ended up like shit, he has a natural feeling for that stuff. Already with the ‘Monsters’ album he talked about the importance of the running order. I didn’t believe it, but it is very important. An album needs a certain flow.’’

,,WE REALLY WANT TO MAKE IT HAPPEN’’

Who are your influences as a bass player?
,,First and foremost Jason Newsted, still. Also Dave Ellefson, Lemmy, not so much his playing style as well as his overall coolness. Even Flea, and Rex Brown [Pantera], whom I think is overseen by the people. Regarding bands, it is a varied style, from black and death metal to rock n roll, ska, punk.’’

Is there anything you cannot do in Statement music wise?
,,No, it isn’t set but we have tried softer songs and it just doesn’t work for us. A ballad is one thing but when it’s more like pop we get bored. We all played in some pretty extreme metal bands and we have played around with Jannick’s voice to integrate it in the music of Statement but it just doesn’t fit in.’’

Regarding playing live there isn’t too much certain at this moment.
,,Next spring we hopefully can do a UK tour, maybe some festivals and in the fall we most likely tour Denmark, come back to The Netherlands, play in Germany and try to build a name in Sweden and Norway. I know it is very difficult to plan with the current economic situation. Many bands are pulling back and I totally get that, but we really want to make it happen.’’