Review | Statement – Dreams From The Darkest Side 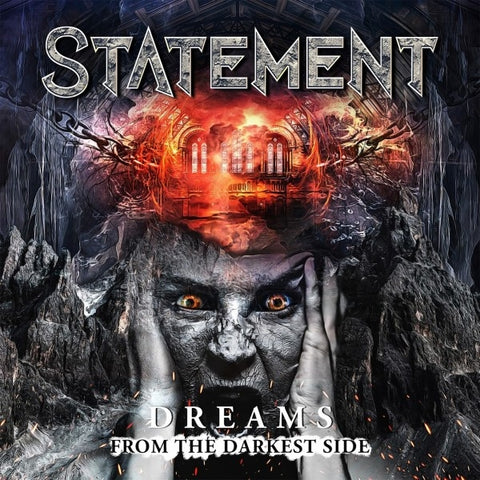 Review | Statement – Dreams From The Darkest Side

On their fourth record Danish five-piece outfit Statement have made their ultimate statement serving up a whole bunch of rockers, metal songs and a ballad or two that all sound pretty compact, heavy, yet catchy and well produced and crispy mixed by Soren Andersen who also was responsible for the latest Marco Mendoza record `New Direction’.

Okay, the music might not always be super original perhaps but Jannick Brochdorf (vocals), Daniel Nielsen (drums), Lars Ulrik Le Fevre (guitar), Martin Poulsen (bass) and Niels Alex Larsen (lead guitar) together form the complete package. Ready to blast some more Danish dynamite through your speakers. You might hear a few Volbeat influences here and there but these boys rock much harder, faster and with a shit load of determination. Listen to songs like ,,Don’t You Hide It’’ or better even ,,Indestructible’’, that really kicks ass galore.

The band is being described as a mix of Accept, Priest, Scorpions, Metallica and Volbeat and there is certainly some truth in that I guess, but the fives Danes have added their own dynamics and heaviness to the mix. Every now and then the foot goes off the gas pedal for a more ‘sophisticated’ track like ,,Fade Away’’, but also at those more ‘quiet’ moments Statement sounds impressive. There is not much more to say then that ‘Dreams From The Darkest Side’ is a really cool rock/metal record with balls and energy. If the above-mentioned bands mean anything to you it might be a good idea to get acquainted this new record of Statement. In the mean time I will be checking out some older material as well….