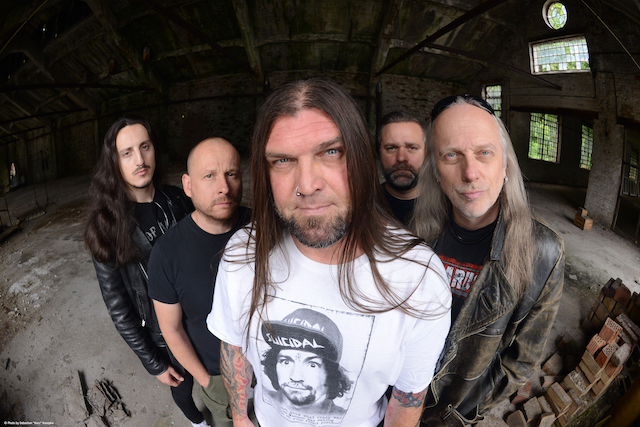 For the age of no reason

Being part of the German thrash metal scene for over 35 years and considered as one of the pioneers, drummer Markus “Makka” Freiwald and guitarist Bernd “Bernemann” Kost eventually took matters in their own hands after they both got fired from Sodom, for unknown reasons early 2018. Makka and Bernemann formed their own thrash metal band Bonded and found in guitarist Chris Tsitsis [ex-Suicidal Angels, Destroy Them], bass player Marc Hauschild and vocalist Ingo Bajonczak [Assassin, New Damage, Supersoma and Lord of Giant] their new partners in crime.

Bonded’s debut album`Rest In Violence’ early 2020 proved that these guys meant serious business and that nothing could stop them. Not even a pandemic. Yes, the cancellation of their first tour was a big disappointment, but instead the five-piece started to work on their second album a.s.a.p. `Into Blackness’ was released late last year and marks a step up for Bonded. Guitarist Bernd “Bernemann” Kost is happy to tell HeadBangers LifeStyle’s Lilo all about it.

Here you are……. armed and ready with a new album called `Into Blackness’. What is your first reaction to that and how does it make you feel?
,,Hi, we are more than happy with the album, this time we could spend more energy and passion than ever before into a production. Due to the pandemic and the cancelled shows, we could put all our attention on the song writing, preproduction etc. The only advantage of fucking COVID. The work was worth it and, in the end, we got a mighty successor for `Rest In Violence’, our former studio album. Again, we hit the German Album Charts, #77, and the response from the fans is overwhelming. We are really proud of `Into Blackness’.’’

We needed to go one step further.

Were you planning to make a second album as soon as possible after the release of the first album `Rest In Violence’ in 2020 anyway to keep things rolling, or did the pandemic speed up the process?
,,The pandemic has definitely accelerated the pace, all the shows we should play in 2020 were cancelled or postponed. We wanted to make the best of the situation and I started early in February 2020 with collecting riffs for the next album. Further we had more than enough time for a very detailed pre-production and for choosing the right sound together with our producer Corny.’’

In our last interview you guys [HERE] mentioned there were many leftovers from the `Rest In Violence’ writing session. Did you use those ideas for `Into Blackness’ or did you start from scratch?
,,Yes, there were leftovers, but as long as I have enough ideas I keep on writing and letting everything in flow. Not all of the old material was strong enough, the expectations after our debut were high and we needed to go one step further. So we didn’t want to improve our music by using songs that failed the last time.’’

THE DIVISION OF THE DAMNED

What comes first during the writing process: music or lyrics/vocal melodies?
,,In the beginning it is always a guitar riff, whenever I have any ideas for a new song I record it. I meet up with Makka and then we start building a basic structure together. He adds the drums and we record it. That’s it. To work this way allows us to record many ideas in a short time. Later we pick out the best and most characteristic material to work on it intensively together with the band.’’

As a real Dortmunder Boy I am watching the soccer matches of my local team Borussia Dortmund.

There is a conceptual theme going on in four songs, inspired by the book `The Division Of The Damned’ by author Richard Rhys Jones. Why did this book specifically spark the band in the creative process and how did you use it in the Bonded style?
,,Ingo is a friend of Richard, he loves his book `The Division Of The Damned’ and had the idea to write some lyrics inspired by this crazy story about war, red Army, Nazis and Vampires. We liked Ingo’s idea very much because the atmosphere matched perfectly with the new songs and reinforces the gloomy character of `Into Blackness’. The music was already written but you can hear the influence of the book clearly in the vocals, especially in some Black Metal vibes.’’

In general, do you all have special interest in reading books, research culture and history, following the news and watching documentaries?
,,I must confess that at the moment I do not find often the time to read a good book even if I’d like to. Sure, I follow the news on the radio and in the newspaper, especially now when the pandemic situation and the restrictions are changing daily. Also, I am watching the Ukraine conflict with sorrow. If I am watching TV, I love history or nature documentaries, and for sure as a real Dortmunder Boy I am watching the soccer matches of my local team Borussia Dortmund.’’

Do you think that if it weren’t for the pandemic, the character of the new music and lyrics could have been slightly different?
,,I think so, probably it happens unconsciously. Many people say that `Into Blackness’ sounds much more pissed off than the first release, hahaha….maybe that’s true. I can feel that people’s behaviour changes clearly due to the pandemic and that is only natural. So why should the music remain unaffected by it?’’

`Into Blackness’ stands for the global situation in these days.

Where does the album title stand for?
,,The title `Into Blackness’ is the short version of the tracks name ,,Into The Blackness Of A Wartime Night’’ but we didn’t want to use a title that hardly fits on the CD cover hahaha…. `Into Blackness’ stands for the global situation in these days, Covid, conflicts, destruction of the environment etc. It can also stand for the anger about lying politicians or the weird development of the society.’’

I read in a press release that you stated: ”There are no big surprises stylistically, but we believe that the new album is still a big step forward.’’ Can you explain yourself?
,,I do what I always did, playing thrash metal. That’s authentic and comes from my heart. Seeing this way our latest release was stylistically not a surprise that anybody expected. When Makka and me founded Bonded the final line-up came together only in a short time before signing our contract with Century Media. This time we have grown together as a band and Bonded became a strong unit that continued and refined its style. Especially Ingo’s vocal lines support the music even better than on the debut. We had to work very hard to top `Rest In Violence’ but we did, and that’s why we are very proud of.’’

How was it in general to work on a second album without being able to tour the first album?
,,It was sad to see, that directly after our first release the lockdown followed. We had many offers for shows and the best mood you can imagine, but Covid exploded like a bomb and destroyed the whole promotion. Like I said, it was not a substitute for playing live but we tried to enjoy the time we gained and we used it best. Two years ago we hoped that the situation would improve soon…..but we’re still waiting for that.’’

We surely have proven that Bonded is a strong band.

How was the reception of `Rest In Violence’ as an introduction of Bonded and what did the album bring the band eventually? Also, in that light, what are your hopes for `Into Blackness’?
,,The reactions for `Rest In Violence’ were overwhelming and I knew that many people were watching us. Having a past in a famous band guarantees you much attention but also guarantees you very high expectations from the fans and magazines. For me RIV is following `Decision Day’ of Sodom, even like `Into Blackness’ is following the predecessor. We hope to reach even more headbangers with the new album, we surely have proven that Bonded is a strong band and that there are still many people who like us and our music. What can be better?’’

`Into Blackness’ limited first-pressing CD edition [and also the Digital Album] will come with O-Card packaging the two bonus tracks ,,Humanity On Sale’’ and ,,Will To Survive’’. What make these songs worth buying this edition?
,,You can argue over the sense of bonus tracks, to be honest I am not a fan. Bonus tracks mostly leave a bad taste of “leftover“ songs. It’s a fact that we had again a pool with over 40 tracks to choose for the album and these two bonus tracks are definitely full Bonded songs. If you like the first songs you will also like the bonus tracks, promised.’’

Any last words?
,,We would like to thank all the people who believe in us and support us. We really gave our best to make `Into Blackness’ a great album and can’t wait to introduce it live to you. The metal community was always loyal and strong. We surely will survive fucking Covid, and the day will come when we open a big beer together at a festival and having a great time again. Stay healthy friends!’’