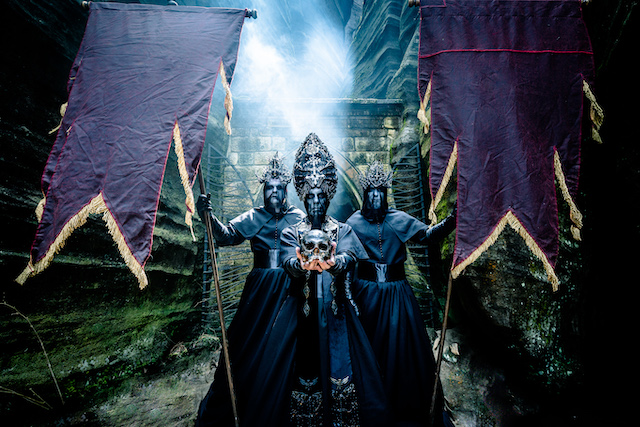 My absence. Almost sabbatical it took shape with me refraining from the journalistic floodlights. I needed a breather without detaching. Needed to explore and browse the world wide web on my everlasting journey to present something fresh, something new. Find new bands, find beers.

THE DARKEST OF METAL

The latter took shape during my ‘summer’ holiday in which we hardly saw the sun. Vacation in which Noah would have built a new ark for sure, as the floodgates opened and darkness was casted. Gloomy drooling days that caused mischief and depression in the aftermath of the ongoing pandemic. Darkness and grey over a once sunny territory reminiscent to Orwell’s novel. “1984” taking shape in real life. Penned between 1946 and 1948 it depicts Orwell’s vision of the Western society in the future. A future currently taking shape. Darker times with depression lurking. Worldwide conspiracy theories bordering with the occult and Lovecraft’s grimoire “Necronomicon” as the handbook to open the gates of hell?

In this dark slumber I prepare to resurface, with a cellar full of beers and a closet full of new albums and demos. All to be explored and later reviewed for you, our devoted readers. Kicking off we delve into hell’s darkest caverns for a trilogy of reviews spotlighting one of metal’s first craftbeer collaborations. Behemoth and Browar Perun joined forces in 2015 for an enticing journey exploring the darkest of metal and deepest of tastes. Shooting root rapidly the band and brewer have released 4 craftbeers under the Behemoth moniker, all in close collaboration. Not just a name giving, band branded beer, but a full collaboration with the band at the helm. Expect the unexpected.

I couldn’t imagine a dark metal band like Nergal’s Behemoth releasing I.P.A. other than it has to be a personal favoured beer. It simply didn’t add up.
Luckily fellow country-men Browar Perun understood the task at hand and delved deeper to make the beers gel better with the band’s legacy. Polish darkness added to the typical fruitiness of the hops at hand?

I had to get acquainted with the idea, but Perun is renowned for their craft and with the band’s personal involvement things are bound to break big. Behemoth’s beers simply are a perfect example of a collaboration rather than exploiting a name. It is murual involvement from brewer and band leading to a range of excellent beers that add to the posture of Behemoth’s legacy. An epic range of beers which we will review one by one in honour of their upcoming release and European tour.

Pouring Sacrum enjoying their ,,Shadows Ov Ea Cast Upon Golgotha” from the recent `A Forest’ EP, simply because it is newer and fresher like an IPA, and the white dress in the video adds to the beer’s label. Sometimes life can be very simple in my home, but little did I know it all adds up to the atmospheric tenure of the video. Atmosphere perfectly lining up with the artwork on the label.

Though it appears occult at first sight, closer inspection reveals entirely different scenery. The silver printing with hands reaching down from the Heavens and doves flying up on the left and right, surrounding a sacrum triangle. The sacrum bone is often referred to as the holy bone because of its triangle shape connected to the Holy Trinity in the human body. It is this fact and glorifying white label that contrast deeply with the grim logo of the band. The contrast that is explored widely with this crisp Indian Pale Ale.

The beer has a nice foamy thick head over the amber clear body of the beer. Nice copper overall appearance. It’s a Belgian style IPA crafted from Australian hops giving it a typical tropical scent and taste. Melon, pineapple and peachy/mango aroma also present in its taste is rounded by a slightly peppery note. Mandatory citrus is present and subdued by a more complex overall taste and drought. In its complexity it wells but also adds to the darkness of the band with a non-harsh subtle bitterness. Yeast being present also adding a little Tripel-isch subnote reminiscent to the (much ore floral) Troubadour Magma. Tiny hints of caramel make it a solid but complex beer which unexpectedly adds to the grim image of the band’s elusive past.

Indian Pale Ale’s are a fine pick for any sunny day, and this Sacrum is a perfect example. Not the typical overly fruity refresher, but one that explores a darker edge of brewing. Moving from the pc to our porch, I take in the sun blasting ,,Shadows ov ea Cast upon Golgotha” on my Charge speaker once more. While my Kamado is heating and home-made burgers are grilled in smoke, it all adds up even better. Sacrum and Smokey burgers with fresh onions and jalapeno’s make a perfect pair to enjoy a late summer Sunday.

When the song dies out and Spotify moved into ,,I Loved You at Your Darkest” I know I’m in for a pleasant lazy summer evening with darkness luring on the horizon.