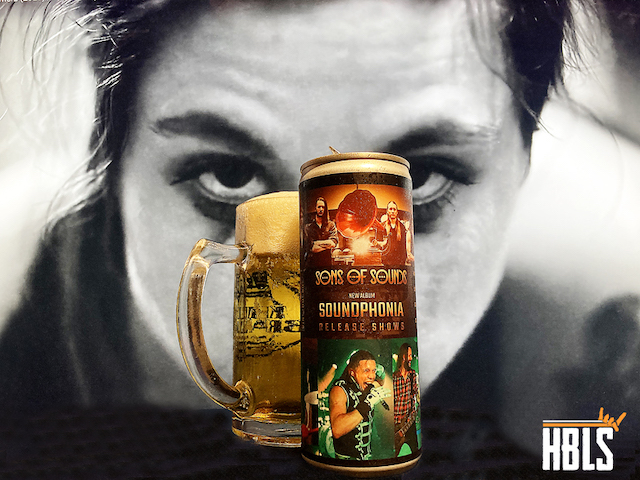 Work piling up and tasting notes to be twisted into form, I come across the ones I missed to catch up on. One of these is the appreciation beer that was handed to me by the members of Sons of Sounds on the recent Geoff Tate tour at Dutch venue Boerderij in Zoetermeer.

THE BAND OF BROTHERS

When after the show we walked out of the venue, we got stopped by the band’s vocalist Roman Beselt and his brother, guitar player of the band, Wayne Beselt. The band of brothers stuck around to hang out with fans and spectators of the gig to enjoy a beer together, toasting to a great evening. For that occasion, the ‘band of brothers’ consisting of the 3 Beselt brothers, with drummer Hubert not present after show, and bass player Marc Maurer, brought their own pilsener. Admitting it was a beer to draw attention to raise their glasses after the gigs, rather than their own branded beer, they definitely caught my attention.

Roman was rapidly telling the story about this being a great way to share a beer with the audience and providing a token of their appreciation rather than selling their own beers. Though it is mainly a conversation piece, the band certainly went to great lengths to make it a memorable piece of art. Their eye for detail and presentation is a key feature of the band that impresses with their slick presence. Marshall stacks with their band logo, color setting of their gear aligned, and stage clothes that fit the profile. It all comes together in the design of this can.

As said above, the can presents the band and zooms in on their recently released album `Soundphonia’. Presented as the band’s beer to pass around at their 4 release shows, the success was extended to the Geoff Tate support gigs. Featuring the `Soundphonia’ logo, the front cover’s classic record player is now featured in the front of the band picture. Live shots complete the presentation of the can, which was designed by the band in close cooperation with personalizing company Opptha/Dosenstar in Germany.

According the information it is a Helles beer, better known as Münchener Hell, brewed following the German ‘reinheitsgebot’ from 1516. A classic beer style brewed following the strict rules of German/Bavarian ‘purity law’ for brewing (by William IV), limiting the ingredients in beer in Germany. The law implies the use of water, barley and hops in the beer’s production. It doesn’t mention yeast as ingredient although knowingly used in the brewing process since the law’s implementation. Initially intended to protect cross markets and prevent brewers to the use of wheat and rye, to protect the production of bread in the region, the law is currently under review. With the expanding global craftbeer market, German beers limit themselves too much, claim breweries and politicians. It slows down the export and exploration of the craftbeer market, limiting their own breweries.

In 2015 the Bavarian brewers voted in favour of a revision of the law and allow other (natural) ingredients in the process. It slowly opens possibilities for the nation’s classic brewers and modern craftbeer entrepeneurs.

THE OLD LAWS OF THE LAND

Sons of Sounds Helles beer is brewed according to the old laws of the land, and pours with nice solid foamy head over a nice golden beer. Poured in a small German beer glass, the 250 ml (8.454 oz.) can perfectly fit. The beer’s presentation is great. I’m not aware of who brewed the beer initially, but it certainly is a beer to enjoy. It is light and crisp in taste, has a great mouthfeel and aftertaste. Slightly hoppy perfume with remote malts opens to the tasting experience, with no little harsh bitters detected. It is a nice Helles beer, like a light fresh pilsner with the dominant bitters. Its color is as crisp as its nose. Very light golden, typical Helles.

A first taste reveals light presence of hops, enhancing the freshness of the beer. It has a nice full taste with crisp and fruity body. Full of sweet malts is evolves upon tasting. Medium carbonation adds to the longer lasting taste. No dominant bread or bitterness like in most German pilseners, making it a nice and easy drinkable beer. In the enduring after taste it swirls with light hoppiness, grass freshness and sweet notes balancing it out to an enjoyable experience. The beer is very drinkable and pleasant to experience.

Good choice by the guys, and a great conversation piece for sure. Ein prosit to the Soundphonia of this interesting German band. “Reset” and “Let it Go”!!!