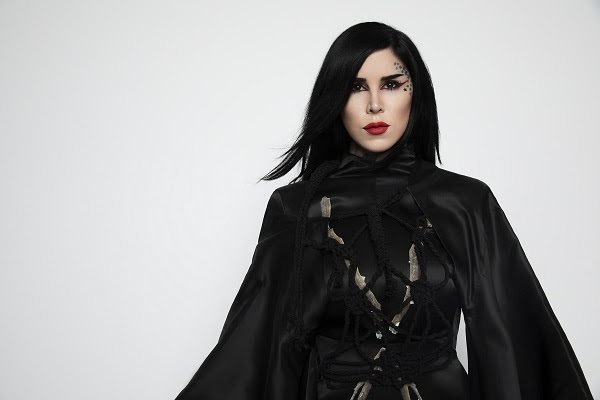 Artist Kat Von D unveils the self directed cathartic new video for “Fear You“, the latest single from her debut LP, “Love Made Me Do It“, out August 27, 2021. “I wanted to create a storyline that exemplifies violence in a way that was therapeutic and not self destructive. I wrote and directed this video to tell the story of not only the pain of heartbreak, but the power of the support from the friends around you”, Kat Von D says.

WATCH THE VIDEO ,,FEAR YOU” HERE:

The visuals perfectly depict the song’s lyrical content; Trust, self-exploration and the concept of overcoming your inner fears when it comes to fully committing your heart to a loved one.
“The video starts off with me picking up my bandmates for band practice, but quickly discovering that Sammi and Gregg are experiencing turmoil within their relationships”, Kat says. “It inspires me to throw band practice on the back burner, and take my mates on a journey to a mystery destination”.

Describing the video Kat says: “We all pile in to an immaculately restored black 1957 Chevy convertible, and embark on our journey down a desolate highway, passing a hitchhiker (special cameo of Prayers), and finally exit and park in an abandoned ghost town where I finally reveal my surprise plan to my mates after I open the truck of the car to reveal an Arsenal of weapons for each of them to choose from. This leads us to a beautiful display of all red glass objects. All perfectly arranged for us to take out our frustrations on together. There’s nothing more satisfying to watch than slow motion shots of the destruction of something so delicate and beautiful. After channeling all our frustrations out into the glass, we all feel a sense of relief and return to the car to drive off into the night. One step closer to healing”.

“Love Made Me Do It” sits at the core of Kat’s universe, proving that music is her first and strongest passion. Having been a classically trained pianist since her youth and with a deep appreciation for music of all genres, Kat poured her soul into this long-awaited full-length debut album. The project features collaborators including Dave Grohl, Linda Perry, Dave Sitek (TV On The Radio), Peter Murphy (Bauhaus), Danny Lohner (Nine Inch Nails), Ladyhawke and Charo.

Long before the history-making tattoos, ubiquitous television shows, best-selling books, and influential beauty empire, Kat Von D sat down at a piano for nearly two hours a day and played. In essence, music became her first creative language and most trusted outlet. Classical training and a deep appreciation for music of all genres essentially underscored her life. She studied voice under Ken Tamplin six days per week, strengthening her vocals. In 2012, she began writing with GRAMMY® Award-nominated legend Linda Perry. Following this experience, Kat continued to write on her own, sitting at the piano and summoning songs from raw emotion.

During 2014, she retreated to London to record the original mix of what would become her full-length debut album “Love Made Me Do It” (KVD/Kartel Music Group) before cementing it with her band—Gregg Foreman AKA Mr. Pharmacist (synth 1), Sammi Doll (synth 2), Dave Parley (drums), and Brynn Route (contortionist). They moved into a bungalow cottage on her property, lived together, and finished the record. Capping off the process, Dan Haigh of Gunship handled mixing. A pastiche of shapeshifting analog synths, post-punk dreamscapes, gothic hues. And shy pop magnetism, these eleven songs echo the eternal will of the perennially brokenhearted to love until death. It’s highlighted by standouts such as the first single“Exorcism”, “Protected” featuring Peter Murphy of Bauhaus and produced and co-written with Danny Lohner (Nine Inch Nails, A Perfect Circle), and “The Calling” capped off by never-before-heard recordings from original scream queen Vampira.

Pre order `Love Made Me Do It’ HERE