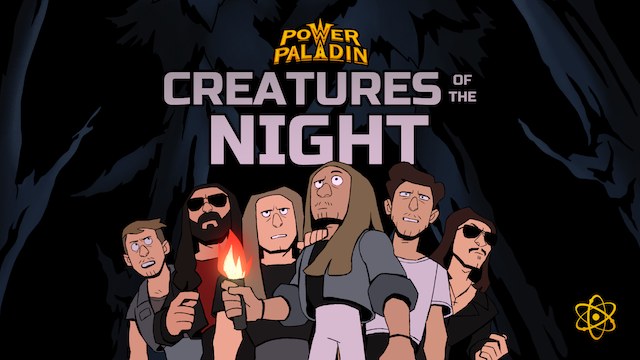 ,,Creatures Of The Night''

POWER PALADIN UNVEIL ANIMATED ,,CREATURES OF THE NIGHT’ MUSIC VIDEO; DEBUT ALBUM `WITH THE MAGIC OF WINDFYRE STEEL’ OUT NOW

Adventurers, heed the call of Icelandic newcomers Power Paladin as they have finally unleashed their debut album `With The Magic Of Windfyre Steel’ via Atomic Fire Records! The six-piece kick-start their journey of conquering the hearts of power metal fanatics globally today with a record that delivers nine highly infectious anthems. As if this wasn’t enough, the band have prepared a brand new animated music video for another new track in cooperation with students of well-known Melbourne, Australia based RMIT University who previously collaborated with acts such as HELLOWEEN, CHILDREN OF BODOM, TANKARD, KORPIKLAANI, ALESTORM and more.

“We still remember that moment after we just finished recording our first album with our no-name band on an island with a total number of inhabitants of less than 375,000, not that far from the North pole and suddenly got hit with a record deal and started to hear that people were actually anticipating the record. It was a kind of a weird situation to be in. We were also joking about how fun it would be to create an animated video for one of our songs and laughed at the idea cause we only know a tiny fraction of the work that is involved in creating such a video, and it is a lot.

That’s why we were even more surprised when RMIT University signalised their interest in making an animated video for our song ‘Creatures Of The Night’ as they usually choose from a “highly classified” list of bands that they work with. The whole process was very enjoyable and it was very fun to watch how the sketches slowly turned into form. We would like to thank RMIT University, Simon Norton, his students and all those who helped make this video become reality. It blew all our expectations out of the water and we think it could not have turned out better. We hope you enjoy it as much as we do.”

Get the album in various formats (CD-digipak, black and colored vinyl) as well as the limited `Kraven The Hunter’ 7″ orange vinyl single HERE

TRACKLIST `WITH THE MAGIC OF WINDFYRE STEEL’

Recorded and produced by POWER PALADIN themselves, mixed by Haukur Hannes at Mastertape Studios (AUÐN, DYNFARI etc.) and mastered by Frank de Jong at Hal5 Studio (BLEEDING GODS etc.), the album makes no secret of the band’s musical idols: “IRON MAIDEN, DIO, HELLOWEEN – the list of bands from the 80’s that influence us is a kind of obvious, but growing up we’ve actually listened way more to the second wave of power metal and acts such as EDGUY, RHAPSODY and HAMMERFALL,” they explain. The group’s love for fantasy games and books from authors such as Brandon Sanderson and Joe Abercrombie doesn’t remain unnoticed either: James Child (Astral Clock Tower Studios) translated that inspiration into the record’s adventurous artwork.