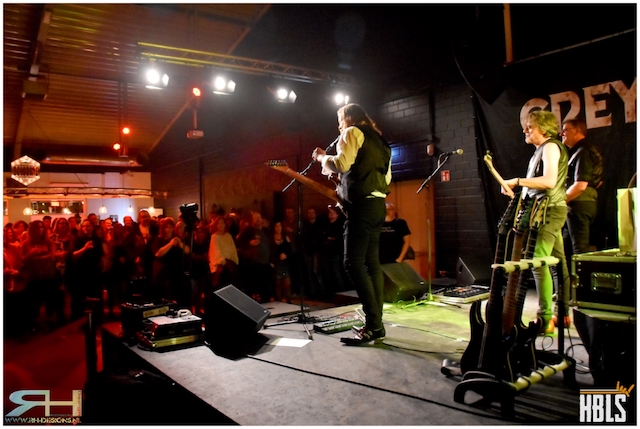 I received an invitation to go to the live album presentation of ‘Afterworld’ by the Aachen based outfit Grey Attack. AREA 3 of the Rockfabrik looked top notch and the invitation included some drinks and Rock & Roll food. Who can resist that?

When I arrived in the vicinity of the hall, it turned out a gigantic tent was set up in the parking lot. Of course it is October and then you should also celebrate the Oktoberfest. So, I managed to make my way through the crowd, entirely in style, which was dressed in traditional ‘dirndel’ and ‘lederhosen’. Once inside, thank God, I was also immediately freed from the accompanying oompa music.

The hall slowly filled with a mix of enthusiasts and invited guests. Grey Charlez and his men start with their first set around 9.30 pm. In between the songs Grey tells extensively about the background of the songs. Maybe not such a good idea because it took the flow out of the gig.
I assumed they would perform the new album in full but that was not the case. They presented 5 new songs, ,,Afterworld’’, ,,Simple Life’’, ,,My Last Dance’’, ,,Change Your Mind’’ and ,,Lost’’, and that was it. Besides that we got a mix of songs from the band’s first 2 albums ‘Grey Attack’ and ‘Grains Of Sand’. Actually I would have preferred to hear the entire new album because the band’s songwriting has evolved, and some of the older songs are not of the same level.

In between there was also a break to raffle some items which didn’t really help the momentum either. I actually thought that was quite a shame, because the sound was fine and the people were clearly looking forward to it.

Besides these little things, it was an evening that was well taken care of by Grey Attack. For me drummer JFK brings in an enormous drive to the band’s performance through his style of drumming.
In any case, a pleasant and successful evening for both band and audience.
Have you become curious?? You can see the band at the end of this year as support for Anvil and next year as support for Loudness.