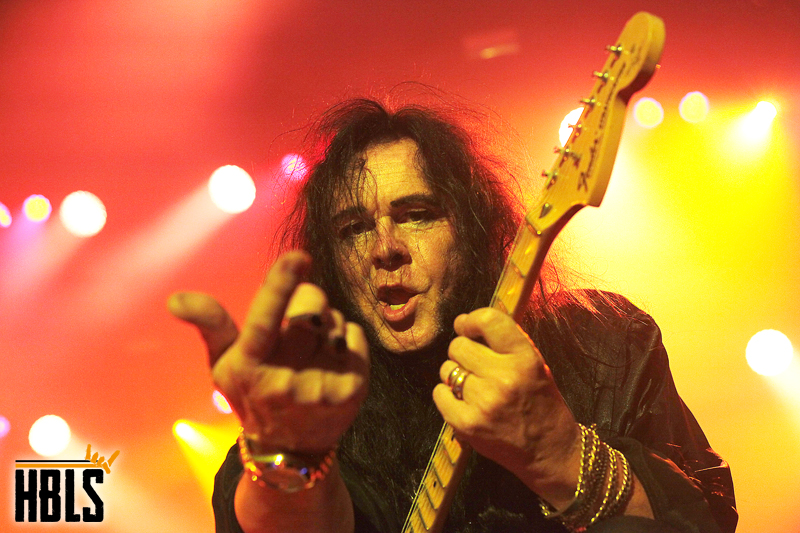 He is the frontrunner of a distinguished generation of shredders putting a mark on Heavy Metal as we know it. Neo-classical melodies and shreds fused to his intense riff-rage, fluently combined into a unique style, uniting the key ingredients of classic rock from the 70s and 80s hard rock, creating his own benchmark. Malmsteen ‘s over the top shredding was groundbreaking, and with his Rising Force he toured the world stages. As time passed by he got labelled ‘egocentric’, and his tantrums got the overhand in his personification. Online he was frequently targeted for his character and more than once got targeted by his former vocalists and band members. Refraining from the star studded personalities vocalists are to Yngwie, he decided to take vocal duties upon him, like he did in his debuting days in Sweden.

As the songwriter and creator of his music, he walks his own path, and ‘Parabellum’ brings him to Europe for a one-off show at the Tilburg venue 013. Averse prejudice and stories about his one man show, we took to Tilburg to witness the iconic guitarist in front of an enthusiastic crowd.

IT’S ALL ABOUT YNGWIE

True, it is all about Yngwie, and Yngwie only.

True, he has his band tugged away at the far side of the stage.

But by all means; the entire audience, front to back, comes for only one man:

That being said it immediately becomes clear that the master is on a roll tonight. Leaning strongly on his soloing, licks and shred, he works through a set pleasing all fans and spectators. Walking onto the immense darkened stage soloing, Yngwie and his trio burst into a spectacular version of ,,Rising Force”. With the Swedish rock icon smiling and enjoying himself nothing can go wrong, and we get ready for a night of rock’s finest.

Throwing his guitar around, strutting the stage and kicking guitar picks into the venue the entire evening, the crowd is served a very well-balanced list of classic and new Malmsteen songs. Present is his towering personality, made to absorb the adoration. Humbling and likeable. Interacting with the front rows the maestro displays affection towards his fans, who get served large chops of the man’s prowess and talents. ,,Top Down, Foot Down”, ,,Soldier” and ,,Into Valhalla” rush by with tremendous drive and pace while Malmsteen fires his arpeggios and baroque shreds onto the listener.

His idiosyncratic approach to guitar playing and rock in general, comes in large tidal waves of long stretched solo spots, with the audience devouring every single minute of it. ,,Baroque & Roll” has the master opening his toolbox of technical prowess, with flawless execution of the most impressive string changes and fretboard gymnastics. Sweep picking, insane hammer-ons and fluently executed arpeggios in bedazzling speed unloading his tormenting guitar magic.

During the set Yngwie frequently switches vocal duties with keyboard player Nick Marino, who mainly focusses on the classic tracks, with Malmsteen belting out the vocals on the newer songs. Nick’s raspy raw voice adds to delivery of ,,Now Your Ships Are Burned”, backed by bassist Emilio Martinez. The multi layered vocals are well balanced and the choruses very much come to live by their interaction. More than once Emilio gets presented the spotlight to interact with the audience while Yngwie straps on a different guitar, or is taken by the technical misfortune haunting the evening. The trio and their leader run through frenetic versions of ,,Relentless Fury”, ,,Wolves At The Door” and the title track of the new album ‘Parabellum’. ,,Parabellum” translates ‘prepare for war’ from Latin, and it is pretty obvious Yngwie has chosen the title to cover his ‘reinstitution’ as a performer.

Highlights are presented by the dozens with memorable executions of the epic classics ,,Icarus Dream Suite Op.4” and ,,Far Beyond The Sun”, which fluently dive into ,,Seventh Sign”. Paying tribute to Hendrix Yngwie belts out a solid version of ,,Red House” before unleashing a spectacular sped up version of ,,Trilogy Suite”. The song’s sweep picked arpeggios and diminished runs fused onto the typical legato phrasing and fire-breathing licks morph into an extended guitar solo. Malmsteen implements fractions of Vivaldi and Bach as well as the solo section from Queen’s iconic ,,Bohemian Rhapsody”. Entertaining the audience while frustrating guitarists present, he grins. Yngwie parades with a wide smile that sets the room on fire, neglecting the tormenting low (grounding?) hum from his main amplifier(s), while his technician has already cross connected several top cabinets. It maintains to bug the team.

Admirable is the roadies’ constant replenishment of guitar picks on the mic-stand, constantly tuning the maestro’s guitars, meanwhile fixing the technical issues.

We’re far passed the one-hour mark of the gig and Yngwie struts the stage with confidence and stride. His solo transforms into ,,Presto Vivace in C# Minor” with the guitar player unloading even more notes upon the listener. Another solo follows in which Malmsteen takes his guitar and effects to the next level, stretching tones into tons of reverb and echo. Using the backline and front monitors to create relentless feedback by grinding his guitar against the surface, his Fender almost drops on the floor with the guitarist stretching to safe his precious instrument. The element of show is dominant, adds to the grandeur of this evening. Yngwie in optima forma. Heavy reverb pulsates from the P.A. when the maestro leaves the stage.

More and more taken by the technical misfortune, switching guitars and walking back and forth to his amps, Malmsteen gets involved with his technician frequently. When everything seems to have cleared he executes the iconic ,,Smoke On The Water”-riff from his hero Ritchie Blackmore and Deep Purple. It is welcomed with appreciation, when the band adds bass and drums. Drummer Brian Wilson moves into his drum solo allowing Yngwie to catch a breath and the issues being fixed. Wilson’s double bass excellence is the dominant foundation underneath the powerful solo touching, base with the classic rock’s finest characteristics.

It’s the step up to the next highlight when the band delve into a storming version of the classic ,,You Don’t Remember, I’ll Never Forget”. Marino roaring powerfully, Yngwie unloading another impressive solo before they wave goodbye.

With lights dimmed and the stage in floodlight, the return of the maestro is obvious. Malmsteen cling’ to the stage for a long classic guitar intermezzo, exploring all aspects of acoustic guitars. Though the technical difficulties endure, de isn’t thrown of his game, and he builds an intense version of the epic ,,Black Star”. Yngwie and his band go all in for show-closer ,,I’ll See the Light Tonight”, rendered into an edited frenetic version that makes the venue explode. It is the topping on a remarkable evening. Swinging left to right the iconic performer unleashed his guitar-fury. His giant wall of Marshall stacks still not functioning properly, with his technician running miles. His technician has a horror evening and is requested on stage by Yngwie for the band’s final bow to display his gratitude.

HE IS YNGWIE MALMSTEEN

The audience enjoyed every single minute of tonight’s performance and, like Yngwie, didn’t get discouraged by the relentless technical issues. At times it was obvious that the issues onstage were larger than we could hear in the venue, Malmsteen and his technician did everything in their power to overcome. It appeared as it made him work even harder making this gig work. A gig which, on the contrary of all prejudice and bad mouthing, was an impressive performance of the man and his guitar taking center stage. Let’s face it: He is Yngwie J. Malmsteen!