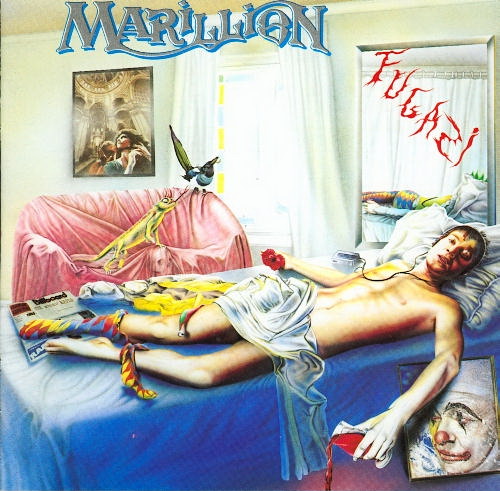 Arguably their least appreciated album but surely one of the band’s best kept secrets hidden in plain sight, Marillion’s `Fugazi’ is now released as the missing piece of their catalogue Deluxe reissued boxsets. After benchmark reissues celebrating their respectable anniversaries, it already became crystal clear that the band and former vocalist Fish left no room for error.

A BOX FILLED WITH SURPRISES

All editions came as expanded reissues in state-of-the-art boxes with additional (live)recordings, polished mixes or remixes in stereo and 5.1 surround sound versions of the original recordings. Accompanied by extensive bookworks featuring stories and liner notes adding up to the joy, these boxsets are definite must haves for fans of the band and any audiophile collector.

`Fugazi’ is arguably their least appreciated, and it beats me why. The album was the first real showcase of the band stepping out of the neo-prog Genesis inspired rock area and broadened its musical horizon by delving from post-punk anger laden hooks and punches, up to more dramatic wordplay and musical scenery explored pop and avantgarde rock. Musically it explores new horizons with the band injecting more bravado in their approach and Fish’ wordplay further deepening the charismatic aspect of the songs unloading drama. The symbiosis of styles comes to a whole with the band staying loyal to their roots without sharpening the blade.

For me personally Marillion is part of my musical upbringing. With Rush providing the foundation of my taste, the Scottish band collated to become the cornerstones of what would eventually develop gradually. As much as the Toronto Trio explored the sonic universe during their 4 decade spanning careers, Marillion managed to cram their sonic evolution fronted by the charismatic Derek William Dick into a lifespan of 5 years. Releasing `Script For A Jester’s Tear’ in 1983, the band hit the European stages snarling press and criticasters with their powerful performances. A quickly expanding devoted following of fans convinced the record company to extend their stint with the band gearing up for this 1984 release. A mission with an unpredictable outcome…

`Fugazi’ was preceded by the high-octane release `Assassing’ also kicking the album into gear. Making immediately clear the band means business as it explores the heavier rock side and attitude with Rothery spitting fire over Kelly’s dominant keyboard swirl. New drummer Ian Mosely replacing Mick Pointer. His versatile drumming strains from the dry beat of his predecessor and enhances the overall sound significantly, especially on this fresh new mix. As the original came across somewhat tinny and kettled, this new version definitely puts the record higher on the fan-faved map for sure. Though it will not replace the ultimate recordings, ,,Fugazi’’s rejuvenation will appeal to many and more than ever before makes worth the trip down memory lane.

More dynamic, more powerful the new mix by Andy Bradfield and Avril MacIntosh impresses. It displays the band’s abilities and highlights their insane qualities and musical versatility. Little bits and pieces come to life more vividly with Pete Trewavas’ bass dominating the foundation hammered down by Mosley. The balance between Steve Rothery’s enchanted playing and Mark Kelly’s swirls of colourful keys, is spotlighted. Vocal domination is still key and Fish’ vocals are brought to the front with reverb and echo punching harder. Clear and clean it radiates with volume knob turned to the max. ,,Punch And Judy” reveals more little twitches with Fish neurotically doubled in the chorus, previously not noted by yours truly. It is something I had to check back on the original release, but the current crisp version makes the search in my storage locker obsolete.

Benefiting from the new powerful sound is the dramatic power ballad ,,Jigsaw” with a desolate ,,Stand Straight, Look Me In The Eyes And Say Goodbye” cried out in almost isolated despair. Packing tremendous power from the pristine musical interaction of the band firing on all engines, it also reveals their thrive for vibe. It generates a bone chilling rattle that won’t let you go. More impressive, more appalling than the pressure packed original. ,,Emerald Lies” is more melancholic and dramatic. Crystal clear guitar licks and piano more distant from the songs rhythmic backbone it progresses with subtle nuances. It touches the heart as much as ,,She Chameleon” does. Whispers come to life and headphones seem mandatory for ultimate experience.

But the band saves the best for last with ,,Incubus” and the title track hitting you in the gut. Tremendous dynamics and poisonous beats enlarge the sound and listening experience of these timeless classics. `Fugazi’ for sure benefits most as it also gets the originally intended ending and not dying out like on the 1984 mix.

But for sure the fans are lingering for the extras provided. The live recordings from the Montreal Spectrum, previously featured as the first four tracks on the `Real To Reel’ album, is showing the band on top of their game. Dry and powerful with an honest production, they display their immaculate power as performers. The cd version already reveals their appeal and the Blu-ray version also has the imagery to the sound, making it more worthwhile. No images from Montreal, but a warming performance of the Swiss TV entitled ,,Hear We Go”.

Not only do we hear the band’s excellent performing skills and sublime musical interaction in front of a crowd, we also get to see why Marillion during those years created a new benchmark as performers. Minimal show, maximized performance with a frontman taking everyone’s spotlight. Fish’s extravagant and corky stage presence was overwhelming as it was dismantling. One liners striking right and interaction with his fans radiating. His charisma completes the other members’ shy presence with only Trewavas battling for second.

It is the chemistry of the individuals making them such strong collective musically. Boiling performance with top notch performances from their 2 classic albums and EP’s. Blunt hooks of ,,Charting The Single” and ,,Emerald Lies”(originally only featured on CD and cassette, if I recall correctly)  as surprise, topping off nuclear performances of powerhouse prog song ,,Script For A Jester’s Tear” and the party cracker ,,Garden Party”, to the brave and social critic ,,Forgotten Sons” and the biting ,,He Knows, You Know” represent the debut, with glancing executions of the new material. ,,Assassing” instantly clearing its live potential, much like ,,Incubus” and ,,Fugazi” as the same lustre, outshining classics occasionally. Check out the solos coming to live and Rothery unloading more than average power on top of his enchanting playing (,,Listen To The blade”).

,,Market Square Heroes” suffocating a jumping crowd on its last legs, making the concert go out with a sizzling bang and emphasizing the timelessness of their performances. Whether it’s the live recording or the live video, both show the band on top of their game. The live cd also features some extra tracks from early demos previously released on the 2cd editions of the albums, plus extended and alternate mixes. It is a must hear and must see for sure.

Good to watch is the mandatory documentary `The Performance Has Just Begun – The Story Of Fugazi’ of the album coming together with its track by track comment by the band members. Reuniting the original line up since their first boxset is still a pleasant watch. It displays fond memories, awkward silences and eyes rolling though overall it is a band reflecting on childhood memories. Matured as musicians and adults they seem to have buried the hatchet with fans benefiting in the end. Backstage interviews and video clips make it a long and enjoyable piece of history.