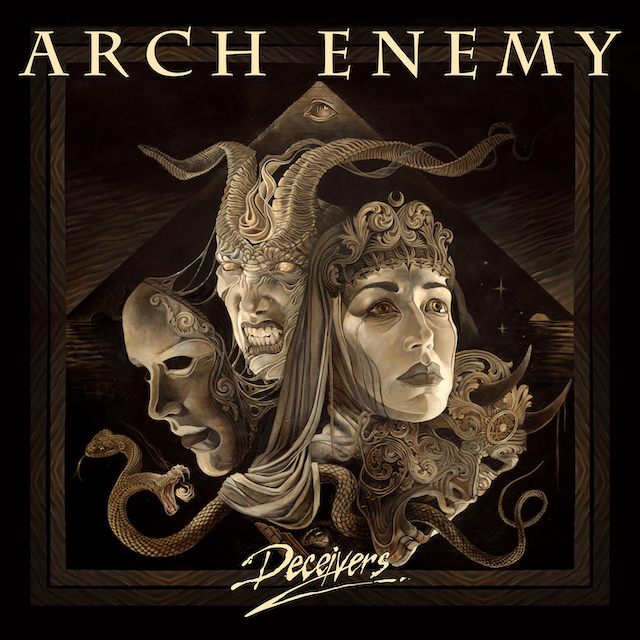 It is the consistency of a band marking their climb to the top. Arch Enemy has established their name with lethally effective renditions of driving force, uncompromised heaviness and subtle melody since their founding 25 years go. It is no longer a force to reckon with, but Arch Enemy build their character and metal on an idiom of the extreme. Flexing the heavy around melodic and vice versa, they gallop in attack modus as front runners of the genre. They wave the flag of metal proud and fierce. `Deceivers’ is their 11th studio effort and, being postponed upon release initially, they cooked up another benchmark AE album chockful of memorable melodic death metal and tarnished blunt heavy metal tracks.

THE BEATING HEART OF ARCH ENEMY

Michael Amott and Jeff Loomis drive the loud vehicle with their extraordinary string escapades and Alissa White-Gluz is the powerhouse vocalist that more than once wrecks your guts with her impressive grunts and melodic vocals. These are the key ingredients in the spotlights of every Arch Enemy album and performance. The beating heart of the machine is not to be discarded with Sharlee D’Angelo’s ravishing bass playing and Daniel Erlandsson guarding the exceptional tempo changes and triggered blasts with his dynamic hard-hitting drum style. It’s the foundation of a bunker that is unshakable and rock solid, masking the genius of their interaction and dominance to the listener.

Amott and Loomis spit towering arpeggios into gear on ,,Handshake With Hell”, instantly fusing it with scorching riffs and fierce melodic soling that are wrapped around the driving drumbeat and bass line. White-Gluz flexes her voice around the forceful robust driven track and switches registers constantly. Her most melodic range is gripping and the song flourishes around the melodic pre-chorus and chorus without lacking the internal combustion that became their trademark. The song is epic and enthralling because of its insane dynamics.

Welling into action ,,Deceiver Deceiver” is taken over by Erlandsson’s insane drum execution, offloading tempo-changes towards powerful gallop, with Gluz belting out a punk/crossover tempo. The pace is insane and the tempo changes keep switching in dynamite mode. Loomis and Amott lay down heavy-as-hell riffs pulling forward, and its melodic leads are just jaw-dropping. Loomis and Amott swapping duties and offloading intensity and melodies. Sometimes the repetitive styling of their benchmarks comes off too recognizable. But it is the moments in which they crank up that they deliver, time after time. High in pace ,,The Watcher” features everything the fans kill for: frenetic riffing and galloping drums, insane guitar melodies and Alissa’s anger-laden vocal delivery switching to her most melodic register. Time changes and guitar melodies are implemented almost at random, increasing the songs appeal.

,,Welcome To The Apocalypse!” White-Gluz belts out in agony before ,,Sunset Over The Empire” kicks into gear. Unloading appealing epic melodies and insane riff-frenzy, Loomis and Amott increasingly grow in their riff and solo discharge, touching with the traditional AE vibe and touching the Nevermore archetypic soundscape, the complexity is eloquent and versatile. Plundering is the bass, adding the low to Alissa’s monumental Grunt ‘n Growl. Benchmark as it can be ,,House Of Mirrors” depletes the Arch Enemy typical drive and urge. ,,Exiled From Earth” embarks on its epic journey with brilliant guitar interaction fusing insane riffs and (folk-ish) melodies to the tempestuous vigor. Like Journey on amphetamines, it blends insane melodies with the Arch Enemy elemental metal poise.

The roaring, almost epic, ,,In The Eye Of The Storm” has a military marching beat that Rammstein would kill for, and its ominous gloom injects internal discomfort. The duelling guitars contrast with the dark edge, implementing the melody usually mandated to Alissa, who now refrains to low grunted power lines with stretching her tone more. The harshness falls together with the luring melodic solo interaction. Melody is key… On the tempo-dropped ,,Poisoned Arrow” the guitars blend in melodic wonder, almost Celtic and epic, as does the occasional luring cinematic instrumentation. Alissa displays an intense vocal execution with low grunting in melodic vocal lines that are crafted around the guitar line. The melodic appeal is grandiose adding to the Arch Enemy specifics. It is the enrichment Arch Enemy keenly utilizes to stand out of their catalogue.

Enriching is exactly what `Deceivers’ marks so well. Little tweaks and twists in the classic cocktail of turbulence. Cinematic deepening, folk-tinged melodies, and gripping emotions that mark the course of `Deceivers’, like on the rousing ,,Spreading Black Wings”. The song checks all the boxes but delivers in a slightly different way with its chants and ,,Phantom of the Opera” looped riff break. The droning riff and reverbing melodies emitted by Michael and Jeff are of symphonic magnitude. Keys, string arrangements and chants amplify the songs melodic spread as it dies out in glorious allure.

A TOUCH OF BLUES

The song is followed by the short melodic interlude ,,Mourning Star” perfectly lining up with the song’s enticing charm, with Amott touching the bluesier vein, to delve into ,,One Last Time” with its ponderous drive and flouncing urge. Metabolically it unites the band’s specifics and shoots it up with some anger-laden frustration over the whispering sections that are packed with gloom.

`Deceivers’ at first listen seems the next step in Arch Enemy’s expanding catalogue. Bearing all the benchmarks and checking all the boxes it appears to be in line with their previous releases. Its enriched sound noticed on its debut spin however comes to life on following playing when you get acquainted with the deeper intensity of the album which, with its little pinches the modified soundscape and execution of songs, breathes new life into the complex compositions on `Deceivers’. Looks can be deceiving and deceivers can be the ones that are abject to renewal and the truth.

Raise your horns and celebrate the triumphant new album of Arch Enemy!