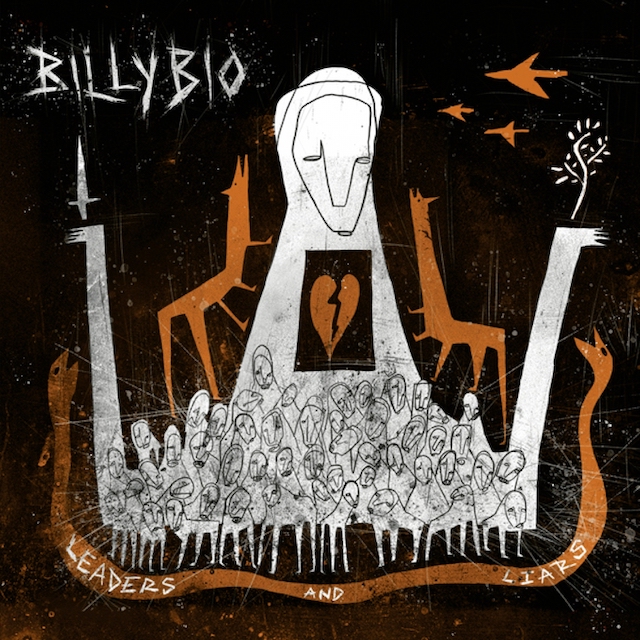 He is back. Graziadei’s first album `Feed The Fire’ certainly fired up the old hardcore engines, and word even has it he is about to fire up the Biohazard motor again. For now, we have Billy at his rawest best as the second BillyBio delivers as expected. It is uncompromising and energetic, in the vein of classic NYC Hardcore acts, executed with sterling panache and unprecedented power. 15 chapters about `Leaders And Liars’ with Billy addressing social and political issues as well as pawing deep in his personal head and heart to release the withheld power to ignite.

,,Black Out’’ is the exact match to cope with the aftermath of 2 years full of pandemic bullshit, lies and deceit. Pitching the curb ball into play with scorching agony he roars with blunt power over echoing guitars before Billy and his hardcore guerilla army start to kick it into gear. Held up infectious grooves with tremendous spit the song also features the typical nesting chorus. A trademark Billy grips back to constantly and his ability to fuse soaring grooves and high velocity outbursts to easily nesting drops and hooks is impeccable. BillyBio roars loudly and with style, redefining their own unique sound.

The political laden ,,Fallen Empires” opens with electro sound effects and narration to shoot into gear with fury. Calling out “History washed down the drain” and “Watch it all burn in flames…” Graziadei addresses the obvious without downscaling on anger and frustration. Not restrained by any band interest Billy cuts deep. Maintaining the lineup of the debut, BillyBio also has impressive drive and band feel scattering off the album. Fred Aching Rios’ (Powerflo) drumming is versatile and driven, with the right amount of poise and groove to keep thing tight. Time changes, speed drops and breaks which Dan Manca and Ra Diaz (Suicidal Tendencies/KoRn) fuse with deep bass slaps and ferocious plucking, making the foundation rock solid, pulling it through the tempo changes. Lead duties are distributed over Zebrahead’s Dan Palmer and Exploited’s Robbie Davidson with Billy signing for the roaring undertone and heavy riffs.

Spitting fury, the punky title track flies by like a freight train leading seamlessly into ,,Lost Horizon”, maintaining high velocity the traditional way. This first chop is reminiscent to Biohazard’s sound, minus the dual vocals. Pulling into the A-graded ,,Turn The Wounds” with ominous doomy undertone, Billy displays his tremendous thrive and skill as a songwriter. It’s one of those standout tracks firing up a crowd. Intense is the soloed opening to ,,Deception”, pushing the song into an anger-laden narrative with sticky bridge and chorus.

Speed increases on the punk anthem ,,Generation Kill”, ,,One Life To Kill” and ,,Our Scene”, igniting mosh pits in the head. Energetic and vibrant, bold of classic ingredients. Blending the typical NY hardcore roots with the modern Westcoast vibe, much like the ferocious ,,Enough”. Grittier and very sticky is ,,Looking Up” which is another typical Billy G track with drive and energy, twisted into form with bouncy sections and rousing chants.

Tracks displaying Billy’s musical orientation don’t always add up to the poise, but certainly reveal his creativity and entrepreneurship. ,,Sheepdog” is a short instrumental taking the speed out, but matching the tenure. The acoustic electro meandering ,,Just The Sun” and ,,Remission” are short effect packed timid section that seem to add to the last section of the album. Much like 4-piece rolled out, they repress the anger and set a specific mood on which ,,Enough” and (the personal) ,,Cyanide” are crafted. There’s a specific vibe and tone to the intermezzos, but it needs time to grip and grow.

Right of the pitch this album feels comfortable for fans of the genre, yet it also packs some twists and turns that reveal Graziadei’s wide interest in music in general. Difficult to fuse, he manages to implement some of these elements into the potion he creates. The overall outcome is an energetic one indeed, with all key features of his elusive past captured perfectly, whilst not forgetting to refresh and reset occasionally. Core of the case is the band’s performance and top-notch execution making this another superb piece of hardcore!