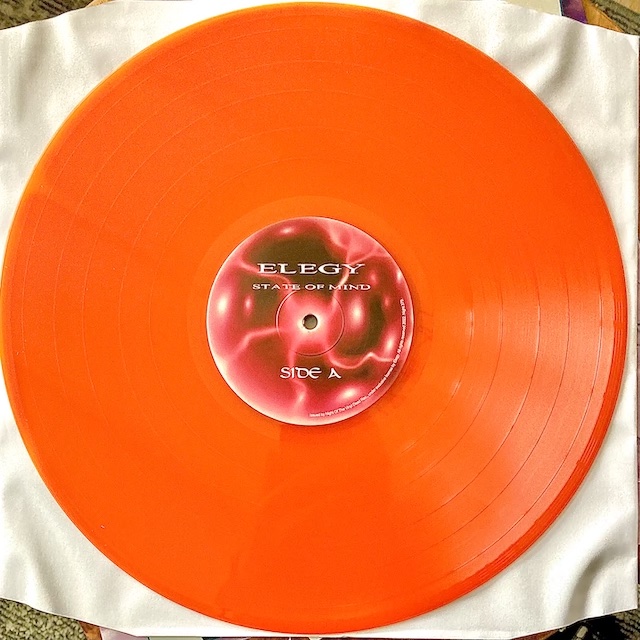 Night of the Vinyl Dead Records

With the band’s celebrated debut released in 2016, the label intensified its collaboration with the Dutch prog metallers, making the back catalogue of Elegy available on vinyl for the first time.

The second loot of this collaboration is this vinyl issue of their acclaimed album `State of Mind’, originally released in 1997. The album comes in a limited run of 400 copies on orange vinyl and with additional inlay featuring pictures of the band line up, and lyrics.

With Eduard Hovinga stepping back in pursue of his own career, Elegy present on `State of Mind’ follow-up, none other than Ian Parry (Hammerhead, Vengeance, Consortium, etc). It marks for a new direction with the band fusing their typical styled prog to the more powerful classic range of Parry. Opened by the short epic-oozing instrumental ,,Equinox” the band shifts gear and shoots into the timeless classic ,,Visual Vortex”. Van der Laars’ typical melodic riff offload and howling guitar-screams are pulling forward the riff monster. Hammered solid by Bruinenberg, the song is packed with signature time changes and breaks. The bass line touches the riffs constantly, providing the feel of low (G) tuned guitars, deepening the sonic palette. Keys are less dominant, but there’s an insane melodic subnote that nests on the spot.

Pushing the envelope in the progressive metal direction even more, the band delivers the insane ,,Trust”, also emphasizing their pristine song writing skills with nesting bridge and appealing choruses tapping the AOR vein. It is Ian holding up the progressive flag while belting a powerful melodic vocal job, bridging the gap towards a bigger mainstream metal audience.

Odd time signatures set off the monster ,,Beyond” (written by Parry) with its welling vocal interaction over the powerful riffs and breaks. There’s a rousing power to the song with its melodic outcalls and cheers towards the (pre)chorus, disrupting from the progressive breaks and steep turns of the song. ,,Shadow Dancer” reveals more of the classic Elegy elements with wonderful drums and stop ‘n go licks and riffs. Henk’s guitar solo is phenomenal and transgresses into a jawdropping twin section pitching high. The man is of exceptional talent, displayed all over his recordings.

An instant classic is ,,Aladdin’s Cave” with its epic opening, proving to be the inspirator for many of nowadays’ epic and symphonic power metal band. There’s an epic grandeur oozing through, without lacking intensity and power. Breaks constantly make it morph with licks and riffs weld on the drum backbeat. Aligning with the arpeggios on the refrain, Helmantel’s bass lines are as intricate as v/d Laars’ riffs, but the low end also fuses well onto the dynamics of Bruinenberg’s playing. There’s no opening left untouched to bring the dynamics of the bass close to the riff deliverance.

Opening side B, the title track displays the band cruising into a more melodic direction with what perhaps can best be descried as melodic metal with AOR appeal. There’s a lot of power discharging, but the song nests like as easy as a Survivor track. The chorus actually comes close to a ,,Burning Heart” dosed metal chant before going all moronic in the instrumental section, pitched in by neurotic growl ‘n anger by Parry. Picking up turmoil, the song increasingly builds towards metal perfection. ,,Destiny Calling” is opened by one of v/d Laars’ finest guitar solos recorded. Melody and harmonies pulled down to the crystal-clear pitch of the low frets. What follows is a piano injected metallic power ballad with insane melodies and hooks.

Close harmony vocal interaction and lush melodies are constantly powering up and unload in the attractive chorus with powerful accolades. They even ‘go German’ for the songs towering endgame with larger-than-life pompous choral interaction and wonderful guitarwork.

The subtle notes are extended into the short instrumental ,,Resurrection” that loads up into the prog monster ,,Losers Game” with an intricate bass line before bursting into action. Like stepping on a landmine, the track generates sudden bursts with classic US power metal feeling lurking. Riff and drum interaction start to propel the insanity of the song and showcase the gigantic potential of the squad Elegy was. Throbbing with droning bass and riff power ,,Supression” rolls forward over a sudden outbreak of riffs and pitched guitar harmonies. The song is another precursor of later genres, redefining the melodic specter of progressive metal by embarking onto extremely melodic terrain.

With the initial release ending right here, this new album edition also brings across a treat in the form of bonus track ,,Sweet Revenge” that touches more with the band’s previous releases. Still rough around the edges, the song certainly evokes the progressive past of the band with Parry working hard to lay down his powerful vocals. There’s a lot of guitars to be enjoyed and the drums are powerful. Though not matching the powerful production of the album, the song certainly is a gem to experience, a treat for the fans.

`State of Mind’ holds up after all these years and it is because of Parry’s range the band is introduced to a wider musical variety. Rooted deep in their classic progressive past, the band pushes into a powerful melodic direction that is enchanting. Without lacking the wizardry and musical genius of the past, they open to a wider reality and pull fans into new directions, while also touching with cinematic and epic elements. Elegy and `State of Mind’ proven to be a precursor of new genres, paving ways for new metal directions and pioneered without even be aware of the decades to follow. Cobblestones that gradually transform into the asphalt motorways for a whole range of melodic epic and symphonic metal bands to embark onto.