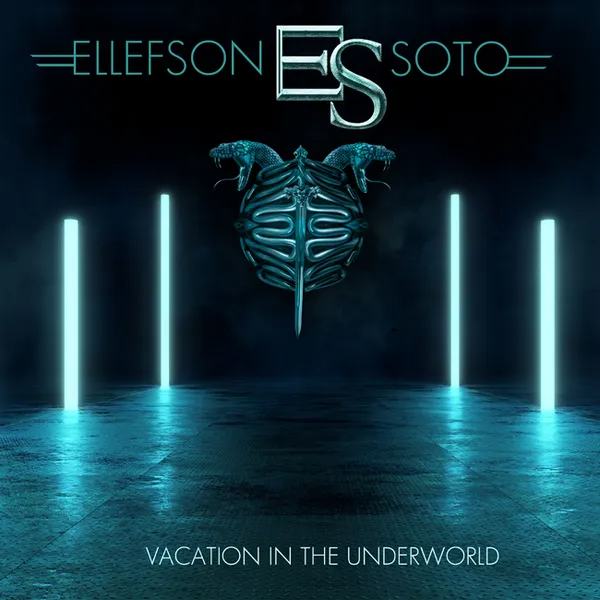 With the Ellefson / Soto release `Vacation In The Underworld’ former Megadeth stalwart Dave Ellefson bounces back from the nasty break-up and accusations that caused his departure from the band. Though I wasn’t sure what to expect and being rather prejudice towards the album, the title track immediately made clear this album is relevant on multiple accounts. For one, it proves Ellefson’s craft of composing solid melodic metal tracks, and it also brings forward the metal in Jeff Scott Soto that ignited the Sons of Apollo releases.

THE ROOTS OF ELLEFSON / SOTO

,,Vacation in the Underworld” instantly made clear the above. The song is tremendously driving and rooted in the Megadeth metal. Discharging with insane drums and dynamic bass lines, the song is driven by a powerful riff with Soto laying down his wonderful vocals. Powerful and versatile, he unpacks the register needed for the genre, balancing the song on the heavy metal edge without losing its melodic aspects. This diversity is displayed all over the album and Ellefson makes it work perfectly. His songs are not the immediately appealing tunes, but contain heads and tail, with a body that is rooted in metal and melodic rock, with the first section exploring the boundaries and from ,,The Revolution” onwards finding form and identity. `Vacation In The Underworld’ grows on you with every single spin and empowers the tracks once you allow them time.

Raw riffs and bouncing heavy drum and bass are executed on the roaring ,,Like A Bullet”, with its growling bass in unison with the peeling riffs, the drum pumped (slightly prog-tinged) ,,Sharpen the Sword” with its intense dynamics and rousing calls, and the slow droner ,,The Reason”. It all gels perfectly well and scatters Ellefson’s intense bass underneath the metallic crushing tunes. Jeff sounds as vital as ever and discharges mighty powerful howls and rawness. ,,S.t.N” (Something to Nothing) Paulo Caridi’s double kicks in with raw riffs and breaks laid down by Andy Martongelli, but overall simpler. Noisy modern effects over a highly dynamic pace.

METAL WITH A FUNK SOUL

Already mentioned, ,,The Revolution” is where the album morphs into form. Shaking off the exploration the following tracks breathe with an identity that fuses the project and styles of Soto and Ellefson. The song warps Soto to his daunting metal register utilized on the classic Malmsteen albums and Sons of Apollo releases. Towering with power and might, he delivers great performances throughout the album. Ellefson holds low profile on the album, giving way to great riffs and licks with drums hammering down. Making up for the loss Dave lays down a funkier tone on ,,Celebrity Trash”, keenly picked up by Soto, giving the song face. Metal with a funk soul, the song emits great melody.

These dynamics find way more dominantly in the following heavier ,,Live to Die Another Day”, with its memorable breaks and tempo changes, and the bass driven short instrumental ,,Hercules” with its ponderous funky drive opening to the equally driven ,,Rise to Win”, that flourishes with dynamic bass-drum and guitar interaction. The guitar harmonies and raining chords enhance it, while Soto belts out the perfect metal vocals. So much power and harmonic prestige in his vocal approach!

Songs in need for special attention for different reasons are the following: The piano ballad ,,Out Of The Blue”, not instantly matching the band’s sonic spectre, but lining up well with Soto’s back catalogue. Great orchestration give it face, with Soto belting out a wonderful and touching job. The song is crafted like the typical 80s movie score, with hinges allowing rotation around Journey and Planet 3’s ballads.

Picture it to be featured on the “Top Gun – Maverick” soundtrack, and you got yourself a nice little nick of melancholy wandering down memory lane. It finds a powerful counterpart in the power ballad ,,Writing on the Wall” that brings more metallic power to the plate. Subtle like ,,Out Of The Blue” it packs more sonic extravagance with bass laying down a wonderful melody and lick underneath the picking guitar and generic synced drum kicks. Soto makes it radiate with appeal.

Evoking a Metallica-like vibe with his roaring bass growl, ,,The Day before Tomorrow” is set in motion. The song wells with melancholic power and towers with melody and great vocals. The guitars are wonderful and the violin adding to the melody and solo is a treat unheard in metal before. It adds to the guest appearance of Frozen Crown’s Jade Etro duetting with Soto, deepening the song and displaying Ellefson’s attachment to modern metal. Great moments, and I dare to dub it one of the best metal tracks of 2022. “Top Gun – Maverick” soundtrack, and you got yourself a nice little nick of melancholy wandering down memory lane.

There’s a lot of nit-picking on the album on various sites and in magazines, with Ellefson’s alleged sexual misconduct likely pushing prejudice to tilt the scale. It also affected my standings on the project making the news. Triggered by the varied reviews, as well as the video for the title track being pushed onto me on YouTube, I slowly but surely felt a need to dive into `Vacation in the Underworld’.

The album definitely makes waves, whether for the good or the bad, but it packs so much quality and sonic perfection that we cannot discard it. Once you let it wash down on you, you’ll find a lot to enjoy, with an album that tends to grow with every single spin. Executed with panache and prestige, the songs bloom sonically. Musical perfection in abundance, it is Soto who stuns with his vocal delivery. He adds the lustre, he injects the swagger and strut, making the songs radiate confidence and stride.

Ellefson / Soto delivers an elixir of brooding heavy metal with thrash poise and melodic swagger, that will appeal to a wide variety of metal heads!