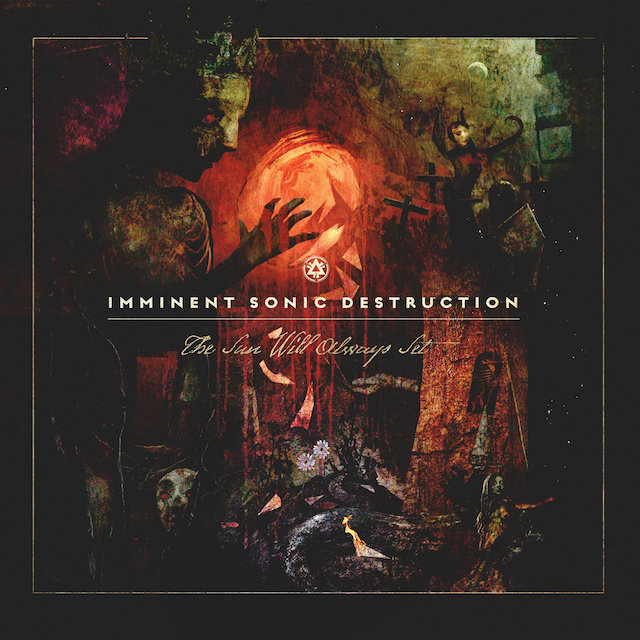 You do not hear that often from Detroit, Michigan based progressive metal band Sonic Imminent Destruction. They have been around since 2011 (but worked under the name Mellotron since 2007), have been able to keep the same line-up together and ‘The Sun Will Always Set’ is only their third studio-album. ‘Recurring Themes’ came out in 2011 while ‘Triumphia’ saw the light of day some five years later.

PROGRESSIVE METAL WITH A TWIST

Guitarist/singer Tony Piccoli is also the main song writer for the band that further exists of Pat DeLeon (drums-ex-Tiles), Pete Hopersberger (keyboards/vocals), Bryan Paxton (bass/vocals) and guitarist Scott David Thompson. From the beginning it was Piccoli’s idea to create a band that would change musical boundaries. And when you have all three of their studio records in your possession you will come to the conclusion that Imminent Sonic Destruction delivers progressive metal with a twist.

The band fluctuates somewhere between Dream Theater, Fates Warning, Shadow Gallery, Black Sabbath, Pink Floyd, Genesis with the twist being the enormous mood swings in and between the songs and the big layers in the vocals that have lots of ‘clean’ parts but are also beefed up with grunts. Add to that a technical instrumental complexity in the most of the time expanded songs (varying from 5.44 minutes to 11.58 minutes) and you have a record that will take you on a quite extreme and maybe even exhausting ride.

With the serene starter ,,Arise’’ as intro the band launches into ,,Fledgling’’ with some monster drumbeats, a pulsating rhythm and already an exciting switch from clean to more grunt-inflated vocal bits, a scorching guitar solo, setting the standard for the rest of the album. But then a song like the title track has so much melody and sometimes it is hard to grasp that this band can sound so very different. For the full 50 minutes there is always something happening. And pay some attention to the fantastic playing of drummer Pat DeLeon who steers the band at times into a Black Sabbath/Dream Theater style. I think a guy like Mike Portnoy (if he should hear this record) would be heavily impressed by DeLeon’s overall performance.

What kind of audience would appreciate the efforts of Sonic Imminent Destruction? Progressive metal fans must most definitely try this one out. What the band has been able to do in the last six years is a vast improvement of the vocal department. Tony Piccoli has surely learned some valuable lessons. He might not be a James LaBrie or a Ray Alder perhaps but he stands his own on this one. But for me the big attraction is the enormous variety and sense of adventure these musicians have been able to put in the music. Mood swings, beautiful melodies, intensity, grittiness and song structures that are at times just amazing, it is all there for the taking. Not a record that will grasp you within a second but the more you hear this the more you will grow into the whole proceedings.

This kind of album grows and becomes an ultimate favourite as long as you have a willing pair of ears, a sense for adventure and patience. You may have noticed that I have not mentioned all songs or dissected them bit by bit. On purpose as I want you to find out for yourself. Have a look on YouTube and check out the clip for the title-track ,,The Sun Will Always Set’’, one of the more ‘sophisticated’ songs on the record. Imminent Sonic Destruction might operate perhaps under the radar but should be right up there!