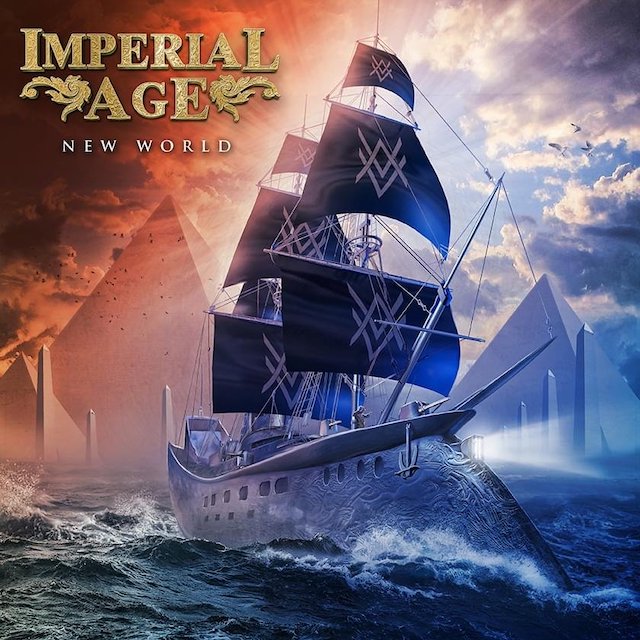 “No band is like Imperial Age” a friend once claimed, and much to my surprise it is a comparable catchphrase opening their current bio. Their fusion of epic bombastic heavy metal with classical elements from the symphonic era of great composers is swung into motion by no less than three singers. Their interaction is key on these epic journeys setting sail on their way to the New World on their third successive album. But there is more to `New World’…

Imperial Age went through storms creating this new album. Offered multiple record deals by different record companies, the band stubbornly remains loyal to their fanbase and initiated a crowdfunding campaign for `New World’ garnishing 188% of funds needed to create `New World’. It is the upside to the misfortune that struck. Miraculously surviving a raging forest fire during their song writing camp and being struck by Covid, was only remotely tragic compared to what they would be facing next; Putin’s invasion of Ukraine, sending all plans to hell instantly.

Things turned sour when Alexander ‘AOR’ Osipov and Jane ‘Corn’ Odintsova published their anti-war manifesto in February of this year, making them flee their country and relocate outside of Russia, setting back the final production of `New World’. In this grim environment the Russian band fell apart but managed to reunite for the final production stages. Operating from Turkey their prosper changed and `New World’ took its course, proving clairvoyant in concept with prophetic lyrical content and concept. As political art immigrants they sent all remaining funds to Ukraine war victims and refugees, while being stuck between a rock and a hard place themselves. Uniquely; there is no band like Imperial Age!

`New World’ opens with the glorious instrumentation of ,,Windborn”, pitching into a chugging riff and cinematic melody. The operatic tendencies are brought forward by the effective vocal melody with Alexander, Jane and Anna (‘Corn’ Moiseeva) delivering their trademark classical vocals. The trio’s seamless vocal delivery integrates Alexander’s tenor, Jane’s mezzo-soprano and Anna’s soprano voice into a forceful unit Powerful and well cemented against the song’s melody it is simple and effective, welling with symphonic accolades. The established atmosphere conjures a magical theatrical spirit balanced by a metal heavy feel instantly imposed on the listener. Taking this cinematic bombast to the next level ,,Legend of the Free” sees more vocal variation with AOR taking the lead in the operatic tinged vocal deliveries the fuses in the sticky chorus. Combusted by the double bass drums firing and solid riff the song merges pompous theatrics and drama with glorious flamboyant melodies.

It is impressive how the band creates these atmospheric anthems in compact dynamic songs, like the following ,,The Way if the Aim”, dominated by the female duo’s alluring vocals. Progressive breaks over a steadily pulling bass line and riff give it a dynamic feeling while the choruses are impressive and appealing. Light vibrant touches of short solo breaks for keys and guitar enhance the song and give it a danceable strut, as if Wagner himself joined forces with the creative team.

,,To the Edge of the Known” reverts back to the band’s previous albums, leaning more on sturdy driving riffs and vocal exchanges between AOR and his female counterparts pitching up in their registers. The dynamics are exquisite with keys in large layers pasting the choruses solid. Shifting gears, the higher paced ,,The Wheel” borders with Epica’s most melodic power tracks without discarding their Imperial Age uniqueness. Polka theme and chugging heavy riffs drive the song.

Going more medieval on the violin opened deck polka ,,Shackles of Gold” the song shifts shape and is one of their most dynamic. Larger than life chorus and impressive melodies. Horns blowing and strings added deepening the symphonic experience, while shifting to back traditional heavy metal structures of bass-drums-guitars for the refrains, the song keeps its momentum.

More cinematic is the wonderful opening of ,,Distant Shores” with its uplifting musical alignment that shrugs with operatic drama. Vocal interaction between the three adds the extra depth touching deep. Transparent the song evolves with keen melodies and droning drum and bass underneath the dominant keys. Hollywood Metal! The song is the last compact track and opens up with luring glamour towards the epic 18+ minute magnum opus ,,Call of the Towers”, with its highly theatrical and scenic opening. Dense layers of keys and chants on a progressive drum roll pull forward, with highly melodic guitar solos coloring the atmosphere.

The song flourishes in the most operatic tenure, full of drama and powerful bombast. Short clean sections are displaying the singers wide ranges when Alexander peels back to his melodic rock voice unleashing his most powerful tenor vocals pushing towards baritone. Pitching up and delving deeper, the addition of angelic chants adds to the lush atmosphere in which the sonic picture is painted. Constant swirls of melodies changing, augment the musical storyboard. Numerous ear mingling melodies find their way to the listener, all connected to the main theme, with orchestration repetively interchanging. Jane takes over to pitch in het most clean voice taking the song into another direction, with orchestration following. Light and serene touching the edges of the powerful chants while the horns wail in and change the musical atmosphere. Slick riffs with pitches and stretched notes discharge and the song gravely builds up towards the turmoil casted.

Intensifying interaction exclamates in towering bombast beyond the 10-minute mark. Church organ and bells tolling bring the next chapter to the front with dramatic daunting enchantment. The end-piece of the song sheds skin again with female dominated clean vocals in highest melodic fashion. Bells tolling alongside the choral melody while drums boost the pace and dynamics. Break, pause… return to form. All so fluently and intensely executed, the song now towers with vocal drama towards an impressive breakdown full of whirling coil and strut with AOR taking it back full circle and the song returning to flourishing form. Pumping up for the final vocal assault and sudden dying second of the album, with the new world reached.

IMPERIAL AGE IS A STANDOUT FORCE

Amidst the current state of the world, Imperial Age miraculously survived the mass-turmoil, releasing an almost prophetic collection of songs, constructed against their typical heavy (metal) operatic sound. The band is a standout force uniting the operatic Wagnerian bombast and theatrical accolades with subdued heavy glance. Tarnished shining metal constructed, with an ear for cinematic drama gel with their intelligent vocal melodies and over the top choruses. There’s a right amount of powerful metal, a solid portion of thrive and strut, intense appealing melodies and an impressive vibe of uniqueness and extravagance.

On the verge of going over the top, the band stands their ground. Imperial Age doesn’t classify as the typical gothic metal band, they are far too. On top the band’s slick presentation and stage presence make it a band that may surprise many and appeal to a wide variety of fans, as well as scare ‘em off. Those taking time, will embrace this extraordinary band.

Imperial Age indeed has no equal!